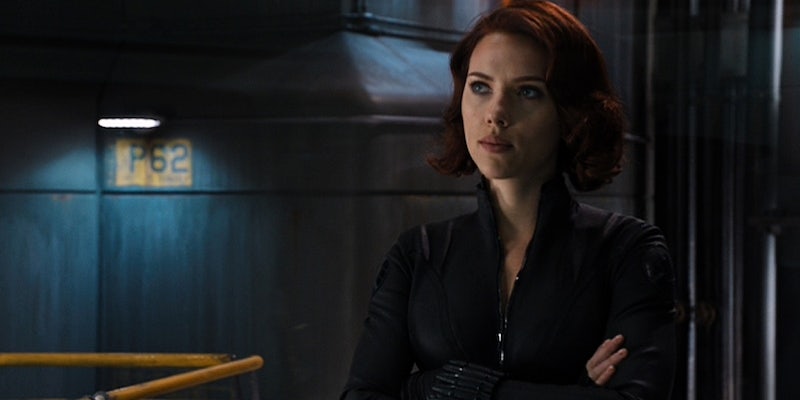 Every review of Black Widow in ‘Captain America’ is wrong

Black Widow isn't the stereotype you've been told she is.

As a pop culture fan, you get used to the fact that mainstream critics are rarely going to share your glowing adoration of trashy entertainment. Justin Bieber albums may sell like hotcakes, but that’s not because they get good reviews.

For me, it’s superhero movies. The genre may have come a long way over the past decade or so, but most film critics are still less than thrilled to evaluate the latest installment of Wolverine Punches the Bad Guy. Luckily, it’s no skin off my back if some middle-aged dude at the New York Times can’t tell the difference between Quicksilver and The Flash.

The divide between fans and critics only becomes a problem when I notice professional reviewers making judgments based on their own preconceptions, rather than what actually took place onscreen. There is no better example of this than the ongoing coverage of Scarlett Johansson’s role as Black Widow in The Avengers franchise. Regardless of what ScarJo says, does, or wears while playing this character, countless well-respected film critics continue to mistake her for a vacuous 1960s Bond Girl.

According to the Guardian’s early review of Captain America: The Winter Soldier, it’s the first time Black Widow has got to be an “actual character” rather than a “voluptuous female mascot.” Unfortunately, chief Guardian critic Peter Bradshaw’s follow-up was a little less sure of this, with Black Widow then being described as a “leather-clad… ass-kicking ex-Soviet adventuress whose auburn hairstyle is matched by her distinctive fake tan-type maquillage and restrained ochre lipstick.”

I’m glad he told us about her makeup routine, because otherwise that description would teach us next to nothing about her character.

In the Independent, Black Widow is a “sultry femme fatale,” although the Telegraph gives her the inaccurate but far more positive rating of “the most (the first?) complex female role in the Avengers franchise to date.” Apparently he failed to notice Pepper Potts (40-year-old tech company CEO), the four central female characters of the Thor movies, Peggy Carter (World War II intelligence agent), Maria Hill (deputy director of an international spy agency), and half the main cast of Agents of S.H.I.E.L.D.

This is just a casual look at some of the newspaper reviews in the UK, where Captain America: The Winter Soldier has already been out for a week. When the movie is released in the U.S. on April 4, you can expect more of the same from American reviewers. The general consensus so far is that Black Widow, a character who receives almost as much screentime as Captain America himself, is only worth describing in terms of her appearance, and then only for about one sentence in a multi-paragraph review.

Just for kicks, I took a look at the top reviews for The Avengers, to see what America’s most acclaimed and respected cinema critics thought of Black Widow back in 2012. Bear in mind that most of these quotes are the only description of Scarlett Johansson’s performance in the entire review.

In the New Yorker, Anthony Lane wrote, “not to be left out, Black Widow repels invading aliens through the sheer force of her corsetry,” while the Wall Street Journal’s Pulitzer-winning Joe Morgenstern complained, “Black Widow spends lots of time looking puzzled or confused.” New York Times reviewer A.O. Scott referenced the 1960s British spy series The Avengers (no relation), writing, “those poor souls who cherish old daydreams of Diana Rigg in leather will have to console themselves with images of Scarlett Johansson in a black bodysuit.”

The Chicago Tribune’s Michael Phillips went for that old favorite, “leather-clad,” while Salon’s Andrew O’Hehir didn’t even bother to beat around the bush, describing, “Scarlett Johansson in a catsuit… cocking her head just so as if to acknowledge that she’s the idealized fetish object of the 11-year-old boy within every so-called adult male.” Idealized fetish object.

If you feel like playing film critic misogyny bingo when America’s first round of Winter Soldier reviews are published this week, I recommend looking out for the phrases “leather-clad” and “ass-kicker.” These are an easy way to weed out any reviewers who weren’t paying attention to the movie, because neither phrase describes Black Widow’s actual role.

For one thing, Black Widow is not “leather-clad.” Not unless you’re talking about the casual leather jacket she wears in a handful of scenes, anyway. Her official uniform is no tighter than Captain America’s was in The Avengers, and is similar to S.H.I.E.L.D.’s artificial fabric jumpsuits. By comparison, the Winter Soldier’s signature look involves leather body armor, ’90s grunge hair, smudged eyeliner, and a black rubber mask. 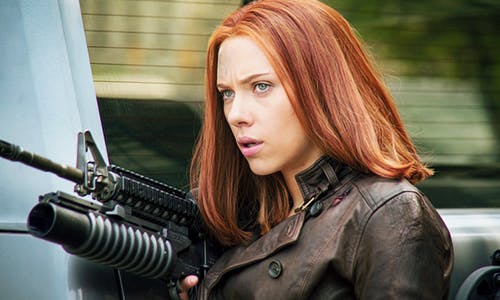 Spider-Man’s spandex costume is probably more salacious, but I’m pretty sure he doesn’t wind up being described as an homme fatale by anyone with a Pulitzer.

Captain America, Thor, and the Winter Soldier have all filmed shirtless scenes (in Thor’s case, purely for eye candy purposes on both occasions), and Cap’s everyday outfit of choice is a white T-shirt several sizes too small for his bulging torso. Yet oddly enough, reviewers somehow manage to discuss those characters on their own terms, rather than reducing them to their component body parts and costumes.

This unrelenting focus on Scarlett Johansson’s appearance, coupled with the assumption that her only non-decorative role is that of an “ass-kicker,” indicates a fundamental inability to see Black Widow as the well-rounded character she actually is. 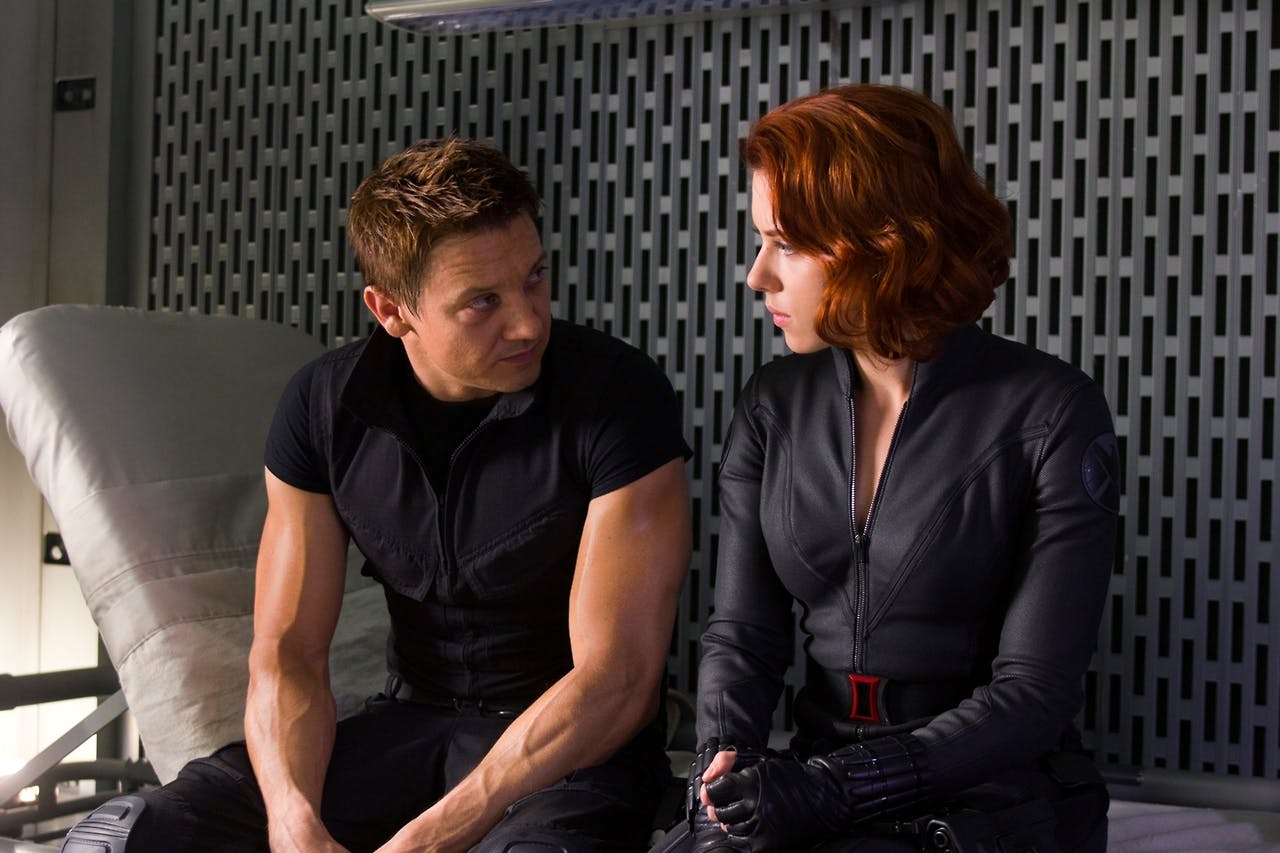 While Johansson’s first Marvel appearance in Iron Man 2 may have relied somewhat upon sex appeal, this was quickly nixed in favor of characterizing her as the most cerebral Avenger. Her most important scenes in The Avengers relied upon her intelligence and skills as a spy, to the extent that she even managed to outwit Loki, the God of Lies. At the end of the movie, she’s the one who closes the portal that let all the aliens into New York. Then in Winter Soldier she’s given second billing to Captain America, a meaty role that showcases a wide-ranging skillset that stretches far beyond just “kicking ass.” At no point during any of these movies does she seduce anyone, by the way.

Sadly, there’s very little sign of this character in the most easily accessible reviews of both The Avengers and Winter Soldier. Judging by the Guardian, WSJ, or New Yorker, Black Widow is more like a blow-up doll with a black belt. By their logic, if she’s wearing a tight outfit, then she must be a sexy ass-kicker, meaning that she must be the token female character, and therefore is little more than eye candy.

With that thought process in mind, it must make perfect sense to relegate Black Widow to a single sniggering comment about her catsuit, because obviously Scarlett Johansson is just there for decoration. And if you’ve read in the New York Times that Black Widow is a token female character, then chances are you’ll have internalized that opinion before you even buy a ticket. The feedback loop of misogynist preconceptions continues on, and in the end, we all lose out.

In geek culture circles, Marvel Studios is known for producing the most progressive of summer blockbuster franchises, coming out ahead of DC adaptations (Batman and Superman), the Star Trek reboot series, and Sony’s Spider-Man movies. They’ve achieved this status on the comparatively unimpressive grounds that each Marvel Studios movie includes at least one three-dimensional female character who isn’t a damsel in distress or the dreaded leather-clad ass-kicker. Yet the prevailing assumption among professional critics is still that any woman in a superhero movie falls into one of those two categories.

Pepper Potts is only seen as Tony Stark’s “equal” once she puts on the Iron Man armor in Iron Man 3. Black Widow is a “voluptuous mascot” because Scarlett Johansson is an attractive woman. Natalie Portman’s Jane Foster got relatively good reviews for Thor because she’s a scientist who wears plaid shirts and sensible shoes, but then she wound up being heavily criticized in Thor: The Dark World for fainting while terminally ill, because fainting is for damsels. If you’re a woman in a superhero movie, you’re shit outta luck.

Marvel has spent several years teasing fans with the possibility of a Black Widow solo movie, which Scarlett Johansson has already said she’d be very happy to do. Luckily, she’s already well prepared for the inevitable influx of reviews that will expend a paragraph describing her body and “leather” catsuit before moving onto the substance of the film.

In an interview with Esquire magazine in 2006, Johansson was already grimly amused by being awarded the dubious honor of being Sexiest Woman Alive. “You work hard making independent films for fourteen years and you get voted Best Breasts,” she said. “What about my brain? What about my heart? What about my kidneys and my gallbladder?”

The interviewer, apparently unaware of the irony, followed this up by writing, “There is, no doubt, a fetish Website devoted to Scarlett’s gallbladder — which, by the way, fellas, is all natural.”