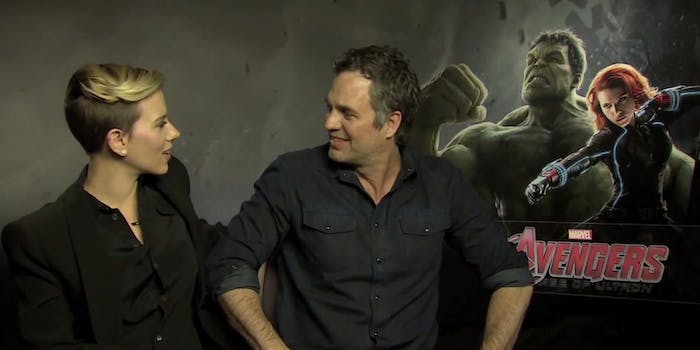 The tables have turned for Mark Ruffalo.

After an awkward interview and a PR fiasco, the bloated Avengers: Age of Ultron press tour is mostly back on track thanks to the Hulk and Black Widow.

While Chris Evans and Jeremy Renner were making lewd comments about Black Widow to Digital Spy on Wednesday, Scarlett Johansson and Mark Ruffalo were talking to Cosmopolitan UK. Instead of the classic interview setup where Johansson is forced to talk about her body while her male costars get to talk about their character and the film, the interviewer flipped it. Ruffalo would be asked the sort of questions Johansson usually gets while Johansson gets to talk in-depth about Natasha Romanov.

It’s kind of like Ruffalo’s pledge to answer the blatantly sexist questions for Johansson during the latest Marvel press tour come to life. Come for the squirming, stay for the demonstration of how well Johansson knows her character.

It’s clear that Ruffalo is made uncomfortable by the questions, even with some coaching from Johansson, and at certain points he has on a face that basically says, “You put up with this all the time?”

It’s also a nice contrast, as contrived as it may be, from the rest of the press tour. Johansson may have a bigger role this time around, but we’ll probably still hear even more about her suit.