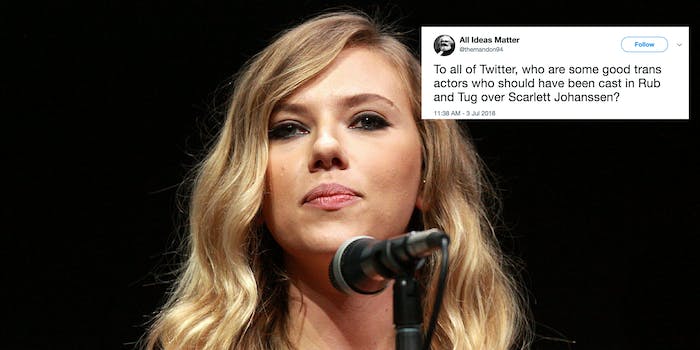 Scarlett Johansson gets cast as trans man, and the internet is like ‘WTF?’ (updated)

Didn't she learn anything from 'Ghost in the Shell'?

Scarlett Johansson has been tapped to play the lead role of a transgender man named Dante “Tex” Gill in the upcoming film Rub & Tug, directed by Ghost in the Shell’s Rupert Sanders. Let that sink in for a moment, because it’s a cocktail of awful.

ScarJo has been cast as the lead role for Sanders’ upcoming drama, ScreenCrush reports, based on Gill’s real-life trials and tribulations as the owner of a massage parlor in Pittsburgh back in the ’70s.

The film draws on Gill’s experiences as the ringleader for various massage parlors that were integral parts of a prostitution ring. He ended up going to federal prison after a fruitful career—and some pretty wild happenings—at the forefront of the operation.

The issue isn’t with the story itself but the fact that Gill, a transgender man, will be portrayed by Johansson, a cisgender woman. Worse still, she’s being billed as playing a “woman who dressed like a man,” according to outlets like Deadline and the Hollywood Reporter.

Johansson appears to have learned nothing from her time with director Sanders after the whitewashing controversy and other problematic content that riddled Ghost in the Shell (not to mention that it was an awful movie). The internet is understandably taking major issue with the Rub & Tug casting choice.

First the Japanese, and now Scarlett Johansson is taking on the trans community with her new film Rub and Tug. I can't wait until her Rosa Parks film comes out. https://t.co/nbmoMkoNlN

Yeah ok. After reading about this "Rub and Tug" movie and then seeing the actual person- I'm SUPREMELY uncomfortable with this movie. This is the person's obituary https://t.co/CP4mgO11Iv

thinks about how no ones gonna go see rub & tug bc its fucking shitty that they hired a cis person to play a trans role and how hollywood is going to be like “see! lgbt rep doesnt sell!!! lets get back to cishet white mens stories!!!”

of all the trans men actors that could play an actual trans man in Rub and Tug they pick fuckin Scarlet Johansson. STOP HIRING CIS PEOPLE TO PLAY TRANS PEOPLE GODDAMNIT

im thinking about scarjo and "rub & tug" rn. but honestly, she shouldve learned her lesson from "ghost in the shell" flopping, bc she didnt stay in her damn lane.

hire trans actors. hire consultants who know shit about the setting and era it takes place in — ppl who were THERE.

Cis actors should not BE in trans roles.

If that's an issue for you, hire trans actors in cis roles.

And hire trans talent for & in said trans role.

It’s hard to wrap our heads around why Johansson would accept the role to begin with. Perhaps the film is still early enough in its casting rounds to hire an actual transgender actor to portray Gill, which would be fantastic (but we won’t get our hopes up).

Either way, this is the question director Sanders should have asked before calling up ScarJo.

To all of Twitter, who are some good trans actors who should have been cast in Rub and Tug over Scarlett Johanssen?

A representative reportedly delivered this dismissive comment on Johansson’s behalf: “Tell them that they can be directed to Jeffrey Tambor, Jared Leto, and Felicity Huffman’s reps for comment.”