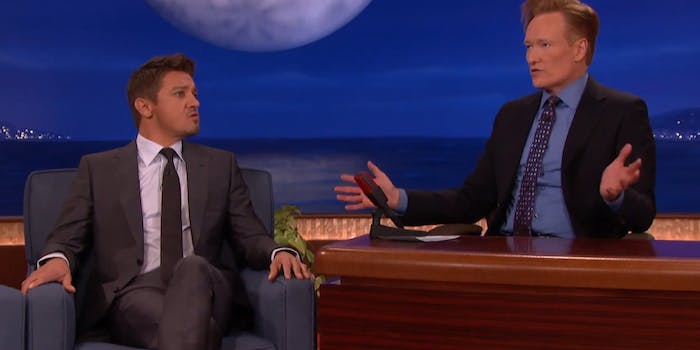 Why are you doing this, Renner?

Jeremy Renner‘s recent appearance on Conan is the dictionary definition of “digging a hole for yourself.”

After Renner irritated fans by joking with Chris Evans that Black Widow is a “slut” and a “whore,” both actors apologized for their misogynist comments. Evans described their behavior as “juvenile and offensive,” while Renner’s statement was more of the “sorry you were offended” flavor of non-apology.

Instead of leaving the micro-scandal to die away, Renner decided to talk about it on Conan more than a week later.  “Black Widow’s been linked to Hawkeye, Iron Man, Bruce Banner and Captain America,” he said. “Sounds like she’s a slut.”

“If you slept with four of the six Avengers, no matter how much fun you had, you’d be a slut,” he added.

Without getting into the politics of why “slut” is an inherently sexist insult, Renner isn’t even being factually accurate.

Black Widow has only had one love interest over the course of four movies: Bruce Banner in Age of Ultron. She’s clearly characterized as having a platonic friendship with Captain America and Hawkeye, and her main relationship with Tony Stark was spying on him while working undercover in Iron Man 2. Judging by the fanfiction produced by the Avengers fandom, people see more romantic subtext between Captain America and Iron Man than between Black Widow and any of her male teammates.

Renner’s mocking comment about “Internet trouble” suggests that he’s failed to realize that “people on the Internet” are, in fact, people. He offended a significant portion of Age of Ultron‘s target audience, and they used social media to make their voices heard.

It’s a good thing he prides himself on being “unapologetic,” because this Conan interview is not going to win him many new fans.