If you were one of those people who’s been witnessing the continued exclusion of Black Widow from Marvel‘s product lineup, then you’ve probably been looking forward to the toys accompanying Age of Ultron.

After all, there’s no better way to counter-balance the previous erasure of the only woman in the Avengers ensemble than by Marvel inevitably putting out a toy motorcycle to go along with that great, truly memorable scene of Natasha kicking into high-gear as she rides a Harley out of a plane.

Even though Age of Ultron gave Natasha one of the coolest moments in the film, the toy licensors at both Hasbro and Mattel have opted to completely erase Natasha from their toy versions of the “Quinjet,” the plane from which the bike launches.

Instead, as John Marcotte at HeroicGirls first pointed out over the weekend, Natasha has been replaced as the bike rider by Captain America in the Hasbro version…

…and Iron Man in the Mattel version. 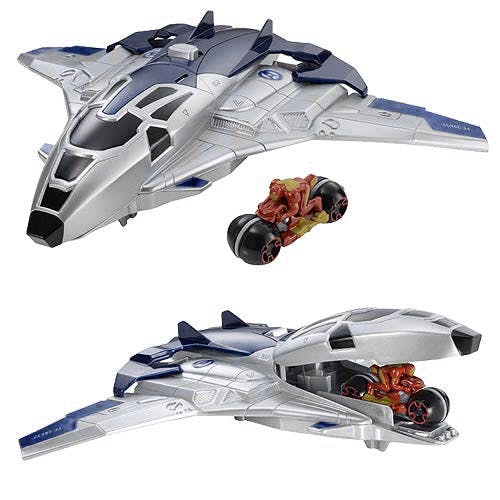 What we’re witnessing is the effect of a sexist model of target group optimization, which argues that boys—the target group, in this case—won’t buy a product with a woman on it. So even though the product is a cool Harley sandwiched in a cool jet, and even though that product is canonically used by a female character, the powers that be at Hasbro and Mattel appear to be afraid that putting that character with the product will cause boys to devalue the product.

The Daily Dot contacted Hasbro for comment, but the company did not respond in time for publication.

I was not going to talk about this egregious erasure of Black Widow by @Marvel and @Hasbro but this is important. It's more than toys.

This is @Marvel and @Hasbro telling every woman and little girl — 52% of Marvel's audience — that they aren't significant or good enough.

Although the #wheresnatasha hashtag has existed since the first Avengers film to call out the exclusion of Natasha from Marvel’s toy shelves, the problem of toy marketing erasing female superheroes is, of course, bigger than Black Widow. Gamora from Guardians of the Galaxy, along with Princess Leia and a host of other Star Wars characters, have all been subject recently to the same fate.

In addition, recent attempts by Marvel and Disney to market gendered clothing resulted in T-shirts telling girls they “need a hero,” and representing Leia as “most likely to be rescued.” In each case, the shirts caused public outcry and resulted in Disney and Target pulling the shirts from their stores, just as previous public outcries over other sexist slights from the company’s product lines have resulted in similar retractions and apologies.

One of the most absurd things about this logic is that it’s inherently self-defeating. After all, if the combined product development and marketing departments of Marvel, Hasbro, and Mattel aren’t comfortable putting out products that promote female characters, then how the hell are they going to deliver any products for Captain Marvel, whose star, Carol Danvers, is a beloved female superhero? Will they just ignore her completely and focus on the film’s minor male characters?

Honestly, this is getting ridiculous. With each new slight, the absence of female heroes in marketing for ensemble films grows more and more looming. If these products, with their inherently sexist divisions, are getting greenlit in the hope that people won’t notice, then they will have to contend with Marvel and Disney’s increasingly attentive, increasingly frustrated fanbase.

In other words, marketing executives, just spare yourself the inevitable public relations disaster in the future and give Black Widow the visibility she deserves.

Photo via lovemaegen/Flickr (CC BY 2.0)