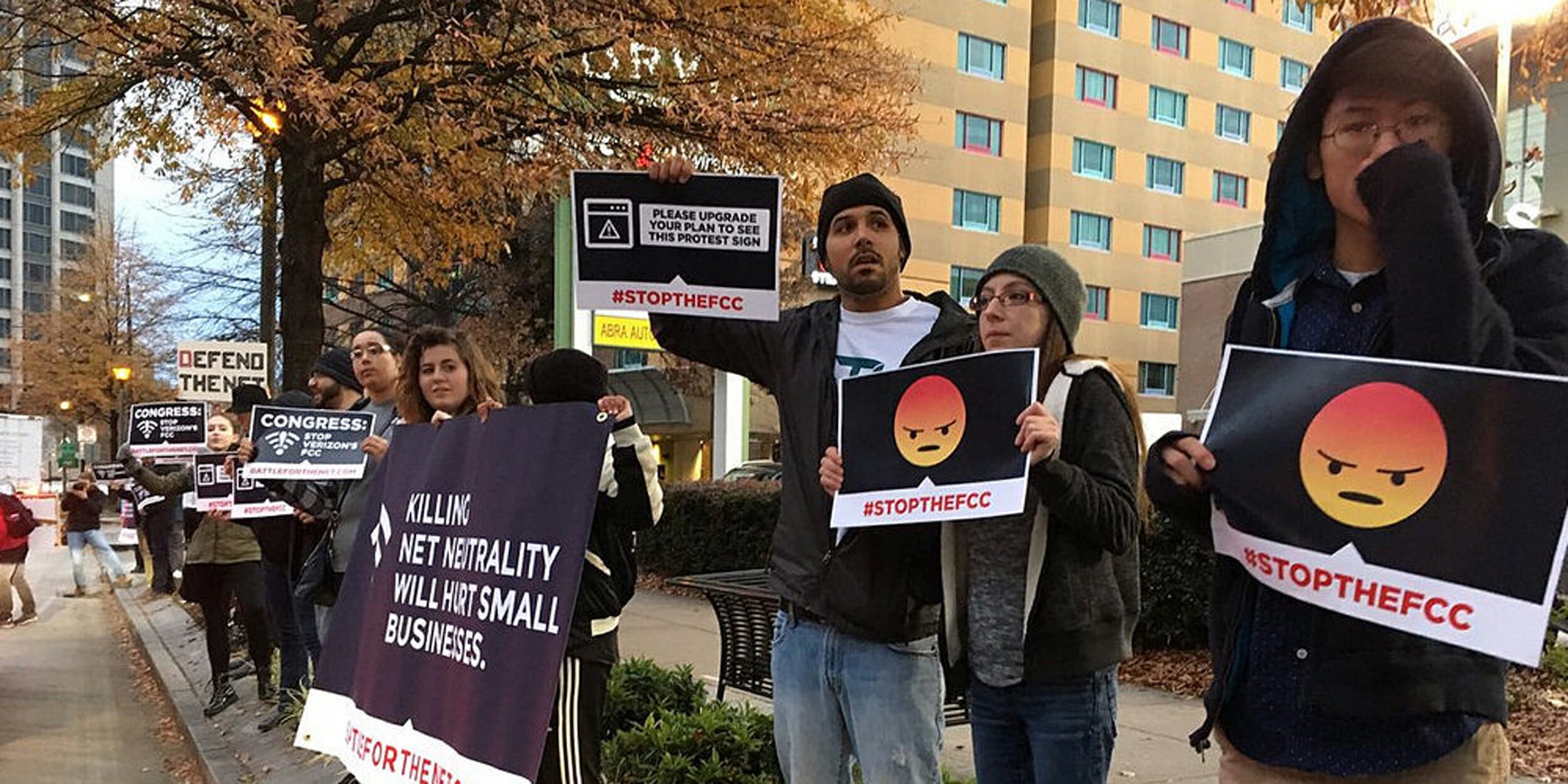 The fight to restore net neutrality has already begun

Internet activists are urging people to contact their representatives in Congress to overturn the Federal Communications Commission‘s (FCC) decision to scrap net neutrality rules despite an intense public outcry for them to stay.

Fight for the Future, Demand Progress, and Free Press Action Fund have set up a website that allows people to contact their representatives and demand that they use a Resolution of Disapproval under the Congressional Review Act (CRA) to overturn the FCC’s decision. At the same time, at least one senator has said he and others are planning to introduce a resolution under the CRA.

The FCC voted 3 to 2 on Thursday to rescind net neutrality rules. The vote was split down party lines, with Republicans voting in favor of the proposal and Democrats voting against it.

“Now every member of Congress will have to go on the record and decide whether to stand up for the free and open internet or face the political consequences of awakening its wrath in an election year,” the activist groups wrote in a release. “Lawmakers cannot hide from their constituents on this issue. The internet has given ordinary people more power than ever before. We’re going to fight tooth and nail to make sure no one takes that power away.”

The website battleforthenet.com allows people to search for their representatives and send them messages asking for them to overturn the FCC’s decision.

Shortly after the FCC’s vote, Sen. Ed Markey (D-Mass.) said he and 15 other senators plan to introduce a Congressional Review Act resolution to undo the decision. The CRA gives Congress the ability to vote within 60 days on regulations passed by government agencies. Congress can overturn new rules with a majority vote.

“Without strong net neutrality rules, entrepreneurs, inventors, small businesses, activists and all those who rely on a free and open internet will be at the mercy of big broadband companies that can block websites, slow down traffic and charge websites fees in order to increase their profits,” Markey said in a statement. “With this CRA, Congress can correct the Commission’s misguided and partisan decision and keep the internet in the hands of the people, not big corporations. Our Republicans colleagues have a choice – be on the right side of history and stand with the American people who support net neutrality, or hold hands with the big cable and broadband companies who only want to supercharge their profits at the expense of consumers and our economy.”

Previous attempts by internet activists to drive attention to net neutrality have been successful. Over the summer, a number of organizations, tech firms, and major websites gathered together for the Internet-Wide Day of Action To Save Net Neutrality, which resulted in millions of comments being submitted to the FCC in favor of keeping net neutrality rules.

The comments left on the FCC’s website have come under scrutiny from attorneys general, the Senate and the House of Representatives in recent weeks, after it was discovered that millions of comments were apparently submitted fraudulently. The FCC responded to the Senator’s request that Thursday’s vote be delayed in light of the comments by calling them “desperate.”

New York Attorney General Eric Schneiderman announced his intent to sue the FCC immediately after the decision. Schneiderman has been at the forefront of the fight over fake comment submitted to the FCC.

“The FCC just gave Big Telecom an early Christmas present, by giving internet service providers yet another way to put corporate profits over consumers,” he said.