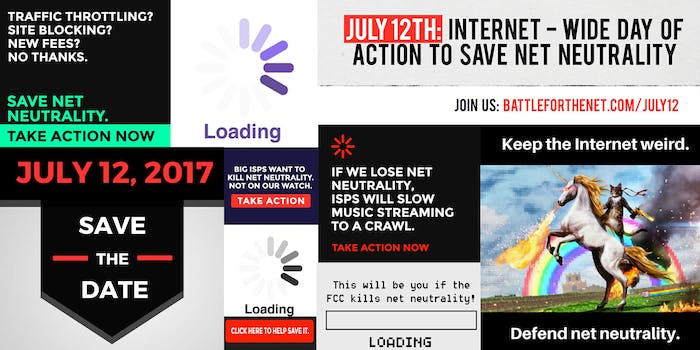 Photos via Fight for the Future

More people left comments than during the 2014 Internet Slowdown.

The historic online protest aiming to save net neutrality is being hailed as a “massive success” by organizers—with millions of comments being left on the Federal Communications Commission website and emails being sent to Congress as a result of the efforts.

More than 125,000 websites, internet users, and organizations participated in the Internet-Wide Day of Action to Save Net Neutrality on Wednesday, according to Fight for the Future, one of the primary organizers. The online protest, which harnessed major technology firms, internet start-ups and advocacy groups, reached “tens of millions of people,” the group said. #NetNeutrality was trending on both Facebook and Twitter the day of the protest.

The massive online protest was aimed at alerting people to the FCC’s plan to rescind the 2015 Open Internet Order, led by FCC Chairman Ajit Pai, which placed internet service providers (ISPs) in a stricter regulatory provision of the Communications Act. By doing so, it essentially solidified net neutrality –a bedrock principle of the internet that ensures a level playing field for everyone on it by denying ISPs the ability to “slow down” or “speed up” internet access depending on their own agendas.

Net neutrality makes it impossible, for example, an ISP to slow down Netflix for a customer in order make their own streaming service faster, and therefore seem more attractive.

“This was a historic moment when the Internet is realizing its power—with massive amounts of creative activism spreading to every corner of the Internet, from the smallest and weirdest nooks and crannies of the web to the most popular websites on earth,” Evan Greer, campaign director for Fight for the Future, said. “And this doesn’t end today—this protest is the kickoff of a sustained campaign to keep the pressure on lawmakers and the FCC to do the right thing. This is just our opening salvo, and it’s a massive one.”

Pierce Stanley, a technology fellow at Demand Progress, co-organized the Day of Action, echoed Greer, adding that individuals “from across the political spectrum” made their voices heard.

“Americans took to the internet to stand up for the rights to communicate freely, to organize, and to innovate online,” Stanley said. “Ajit Pai’s plan to undermine net neutrality and stifle online speech would endanger these ways we use the internet, and could even make it harder—or impossible—to organize protests like today’s.”

The public comment period for the FCC’s notice of proposed rulemaking (NPRM) ends July 17. The commission will then revise the NPRM. With two Republicans and one Democrat currently on the commission, it is currently expected to pass.