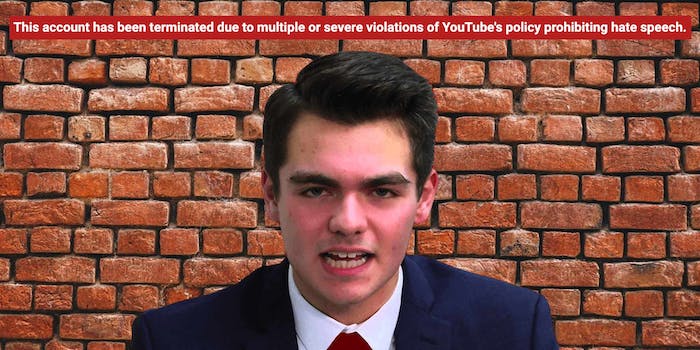 A notice on the channel, which was known as “America First with Nicholas J Fuentes,” states that the termination is related to violations of the platform’s hate speech rules.

“This account has been terminated due to multiple or severe violations of YouTube’s policy prohibiting hate speech,” the notice reads.

The removal comes just over one month after Google opted to demonetize the channel and end the far-right figure’s ability to earn revenue from advertisements.

At the time, a video on Fuentes’ channel centered around Rep. Rashida Tlaib (D-Mich.) and Rep. Ilhan Omar (D-Minn.) was also removed for violating the site’s rules on hate speech.

In a statement to the Daily Dot, a YouTube spokesperson confirmed that the channel was terminated after receiving three strikes for hate speech within a 90-day period.

“YouTube has strict policies prohibiting hate speech,” the spokesperson said. “We quickly remove videos that break our rules, and accounts that repeatedly do so are terminated.”

News of the termination led to both praise and criticism of YouTube on social media sites such as Twitter.

Conservative commentator Ben Shapiro, who is a frequent target of Fuentes and his followers, appeared to defend Fuentes on free speech grounds.

“Nick Fuentes is an absolute disgusting s***show,” Shapiro tweeted. “But if he was banned for his idiotic, garbage viewpoints rather than for violent threats, YouTube shouldn’t be deplatforming him.”

Fuentes, who is active on Twitter, had not commented on the matter at the time of publication.