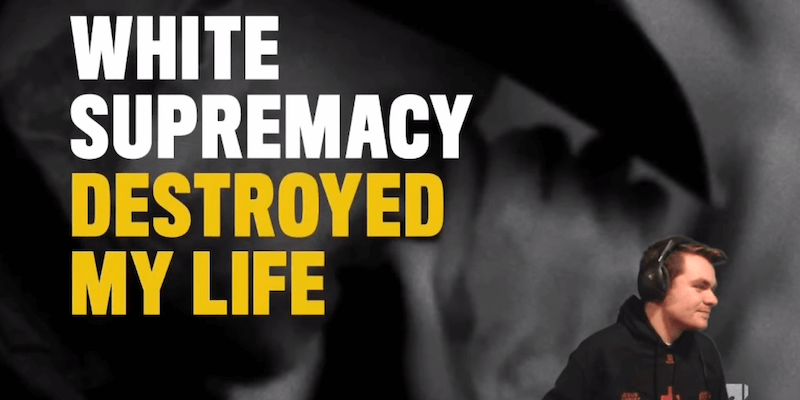 Nick Fuentes, an “alt-right” YouTube political commentator, was given airtime by MTV, where he spoke with a former Ku Klux Klan member.

In a new documentary White Supremacy Destroyed My Life, former KKK member Shane Johnson called out Fuentes on the beliefs espoused on his YouTube show, America First with Nicholas J. Fuentes, saying they resemble the views of hate groups.

Fuentes is frequently referred to as a white nationalist and a member of the alt-right, the loose collection of conservatives that harbor neo-Nazi views. It’s a charge he denies.

“He’s not doing anything different then any of us done, but different clothes … he’s preaching a very extreme message … he could ruin a lot of people’s lives,” Johnson stated in reference to Fuentes’ beliefs.

The hour-long documentary featured two stories of families affected by white supremacy, covering how online hate against people of color can lead to violence in the real world.

Leading up to the five-minute segment of the documentary where Johnson and Fuentes sit down, the crew at MTV follows Fuentes in Chicago, where he seeks to troll a rally hosted by the gun reform organization “Moms Demand Action.”

One person, while walking to the rally, yells at Fuentes, who is wearing a MAGA hat, to “Get the fuck out of our city.” Fuentes retorts to what sounds like a woman, “She should get the fuck back in the kitchen.”

“We’ll get the Periscope working,” Fuentes stated while at the rally, saying that “people want to see conflict, so we’re going shoot it up here—on Twitter, poor turn of phrase.”

MTV posted promotional clips of the documentary to Twitter.

We're investigating the prevalence of racism in 2019 in a new documentary special 'White Supremacy Destroyed My Life.' Rev @roblee4 talked to Kaylin & Gracyn Doctor, whose lives were torn apart after the mass shooting at AME Church in Charleston, SC. Watch TOMORROW at 10p on @MTV pic.twitter.com/CGIWSXAJh4

In the sitdown between Johnson and Fuentes, Johnson compared Fuentes views directly to those of the KKK, while arguing the only difference is that Fuentes followers wear ties. The KKK, which Johnson was once part of, wore hoods and robes.

“If you believe that your race is superior over other people,” Johnson said.

“You have differences between the races,” Fuentes declared.

“The shit your saying now is the same shit we said, you guys are wearing suits, we wore robes,” Johnson said.

“Every other race can be proud to be who they are except for white people,” Fuentes claims in refuting Johnson’s characterization of him being a racist.

You can’t make this up. A former KKK member is calling out @NickJFuentes for his racist views. pic.twitter.com/EBFW6hZSy0

At the end of the interview, the production team cuts to Johnson stating that Fuentes is “smart enough to see he is spreading racist ideology and there are people buying it, he can do some damage, he is preaching a very extreme message.”

In response last night, Fuentes says that he was set up by MTV and led to believe the production was for a different show on young political activists.

Fuentes, in a stream last night, refuted the entire MTV segment, billing it all as a smear campaign against him.

In February 2018, a production company called “Karga7” reached out and said they were interested in filming an episode of MTV True Life about me and my show. They spent a full week filming at my house but never released any of the footage until tonight, almost two years later.

Jason Wolfe followed up and said the MTV True Life episode would air on February 20th. The airdate was pushed back several times until it was put off indefinitely and needless to say this episode never aired… but the footage from this shoot will premier tonight! pic.twitter.com/ZAglRaRTJl

Fuentes said the footage was shot over two years ago.

YouTube hasn’t responded to a request for comment from the Daily Dot about Fuentes’ channel on their platform.

Spotify, which also allows for Fuentes’ talk show to be on their platform, did not return a request for comment from the Daily Dot.

Remember that if you trouble nick Fuentes you’ll be hearing from his mommy pic.twitter.com/QNudA84skt

After the documentary, MTV said they intend to partner with the ADL to work toward eliminating online hate by facing white supremacy head-on.

.@NickJFuentes I saw what you said about me on MTV. Honestly I don’t know you nor do I care to. I promise to pray for you but know this:

Do better and be better.

This appearance comes as a fellow “Groyper” and alt-right congressional candidate Pete D’Abrosca, who has praised the American Identity Movement (formerly Identity Evropa), appeared on the Tucker Carlson to declare the needs for an “immigration moratorium.”

You can watch the entire documentary here.