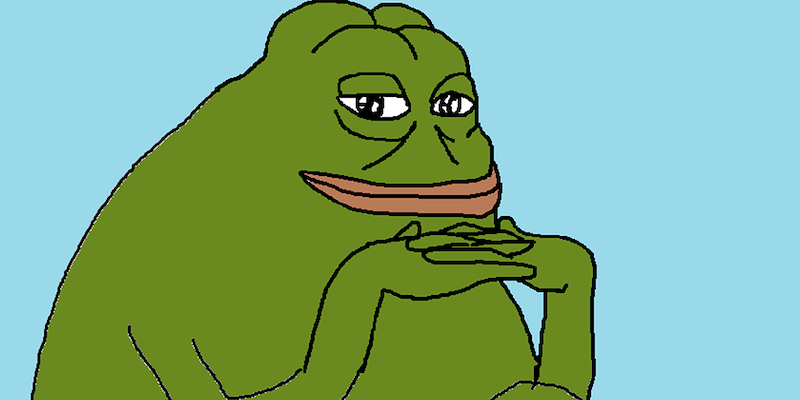 Behind Nick Fuentes, the host of America First, follows a new group of far-right conservatives. They call themselves the Groypers. And they’ve launched a war against the Republican party.

Charlie Kirk, the founder of Turning Point USA, and Donald Trump Jr. do not seem like likely targets for a rising right-wing faction. But much to their surprise recently, the Groyper “army” chose events hosted by Kirk and Trump to descend upon.

Trump, meanwhile, was booed off the stage at a free speech event at the University of California Los Angeles. The Groypers are claiming these two events, along with seven others, as victories against the mainstream Republican party, which they now consider to be “fake conservatism.”

What is a Groyper?

A Groyper is a member of Fuentes’ movement of his brand of “alt-right” white nationalism. The alt-right is a loose collection of conservatives that harbor white nationalists. Fuentes is currently one of its most public faces.

As their chosen mascot, Groypers took hold of an exploitable illustration of Pepe the Frog. While iterations of Pepe are commonly used within the far-right, this version is of Pepe resting a conspicuous face against his two hands.

The meme appears in different forms on Groyper’s Twitter pages to show their allegiance.

The header also has the names of the events, primarily on college campuses, and dates of when the Groypers heckled conservative events, all claiming victory.

What do Groypers stand for?

The Groypers galvanize around the idea that the current Republican party is “fake conservatism.” Basically, they try to push each conservative position farther to the right by supporting a white, male, heterosexual America. They embrace white nationalism in support of policies that, although they have foundations in conservatism, even some Republicans find too far.

The group is extreme on immigration restrictionism, often calling for a total shutdown of immigrants into America, and pushes anti-LGTBQ propaganda to continue to fight a culture wore they believe the right gave in on.

Support of Israel is one major difference between the Groypers and what they call the traditional “Conservative Inc.” While the Republican party remains firm in supporting its Israeli ally, the Groyper’s extreme nationalism and anti-Semitism pushes them outside the bounds of normal right-wing discourse.

“America is NOT a propositional nation. We have NO ALLEGIANCE to Israel,” Fuentes posted on his Telegram according to Vox. “We are CHRISTIANS and we don’t promote degeneracy. Demographic replacement is REAL and it will be CATASTROPHIC.”

Fuentes is also known for casting doubt on the number of Jews that died in the Holocaust, using crude analogies relating to cookies and baking.

He described the above cookie comparison as his “hilarious and epic Holocaust joke” on his Telegram channel.

The Groypers are loyal to Fuentes and share this anti-Semitic perspective. For example, one Groyper page posted a tweet with a photo of a blimp that says “jews rape kids.”

“your uber driver has arrived,” @ayyyetone tweeted with the photo.

Fuentes, an extremely online “pundit,” thinks he can shape youth conservatism because he’s better at catering to the internet culture that many Gen Z or “Zoomer” college students are inclined to consume.

“I think the generational style is so important,” Fuentes posted on Telegram. “Idk if it’s post modern or post ironic but the style and tone is very native to Zoomers which is i think why ppl like Shapiro or Kirk imagine they’re check mating me with some of these controversies but in reality it’s just turning young ppl onto my content.”

Fuentes and the Groypers primarily target the bulk of the Republican party.

In the past, they have heckled speakers like right-wing talk show host Ben Shapiro, as well as Trump Jr. and Kirk.

Their goal is to expose high-profile Republicans by asking loaded questions, often about Israel and homosexuality, to prove their distance from the extreme or true right.

“There were a number of trolls who sabotaged the Q&A portion of tonight’s @tpusa event,” Turning Point’s Benny Johnson tweeted following an event at Ohio State University. “Many of the questions were abhorrent and were not asked in good faith.”

Fuentes responded to Johnson by calling out Turning Point’s moderate stance. Turning Point has been scrutinized in the past for its own racist biases.

“Turning Point is now making a concerted effort to slander all critics of their bullshit fake conservatism as ‘extremist trolls,'” @NickJFuentes tweeted. “We are America First and you are being exposed for the sellout frauds you are.” 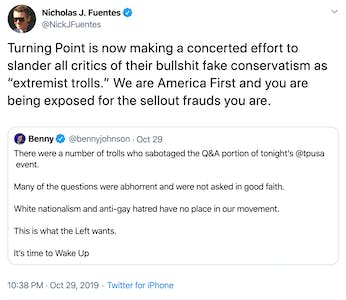 What’s next for the Groypers?

Fuentes has been promoting the Groyper’s next event on Dec. 20. White nationalists Patrick Casey and Jacob Lloyd will join Fuentes in West Palm Beach for the Groyper Leadership Summit. The Groypers will also be mobilizing against Republicans again, as the event is set to overlap with another Turning Point conference.

“The GLS will feature speeches by myself, Patrick Casey, and Jacob Lloyd—we invite all Groypers to join us for a celebration of our Total Victory over Charlie Kirk in the Groyper Wars!” Fuentes posted on his Telegram board.