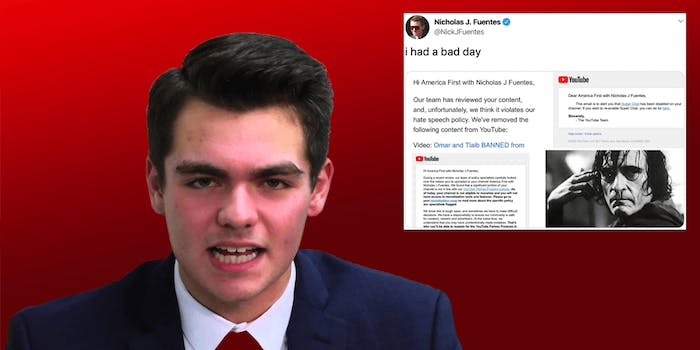 He was accused of violating the platform's hate speech policies.

The far-right YouTuber claimed in a tweet on Friday that the video-sharing platform demonetized his channel meaning that he can no longer earn revenue from advertisements.

After years of inaction, YouTube has allegedly issued strikes, demonetized, and disabled Superchat on the YouTube channel used by anti-Semite and white nationalist Nick Fuentes pic.twitter.com/awhqMdooA0

“During a recent review, our team of policy specialists carefully looked over the videos you’ve uploaded to your channel America First with Nicholas J Fuentes,” a screenshot of an alleged email from YouTube states. “We found that a significant portion of your channel is not in line with our YouTube Partner Program policies.”

YouTube also reportedly disabled Super Chat for the channel, a feature that allows followers to pay to have their comments highlighted during live streams.

“It’s the beginning of the end for me on youtube,” he tweeted. “I just got my first channel strike. I’m banned from streaming for one full week.”

YouTube is not the first platform to take action against Fuentes. Reddit just last November banned a subreddit dedicated to the Holocaust denier after previously banning numerous others. Fuentes was banned from the live streaming service Twitch early last year as well.

Over the summer, YouTube announced stricter hate-speech policies. Among other things, videos denying the Holocaust are no longer permitted.

The Daily Dot reached out for comment to Google, which owns YouTube, but did not receive a reply by press time.