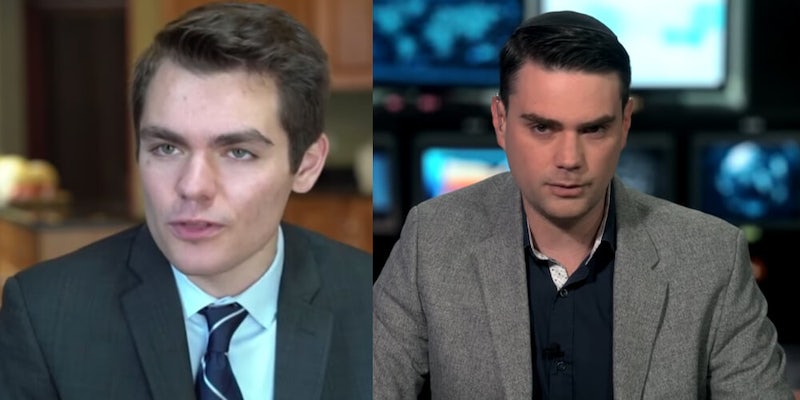 Some criticized Fuentes for 'heckling' Shapiro with his family by his side, while others accused Shapiro of using his family as a 'human meat shield.'

As President Donald Trump makes his way to southern Florida to spend his holidays at Mar-a-Lago, he will stop to give a speech where conservative ideologies are currently clashing.

Trump will speak at Turning Point USA’s (TPUSA) Student Action Summit, where over 2,000 conservative student activists have gathered to hear from Trumpworld personalities and grifters alike.

Followers of Nicholas Fuentes, a white nationalist and Holocaust denier, who refer to themselves as “groypers,” have also descended into West Palm Beach, concurrent with Charlie Kirk’s summit.

The feud between TPUSA and the “American First Groypers” has been ongoing for months now. Far-right students took aim at Kirk for not having conservative enough principles in their opinion.

The students, groypers following Fuentes, would frequently ask racist and homophobic questions directed at conservatives speakers, like Kirk, who spoke on college campuses across the country.

After the groypers heckled a variety of speakers for months, conservative mouthpiece Ben Shapiro addressed their grievances by giving a speech at Stanford University, where he denounced Fuentes and groypers.

The conflict came to a head this week in Palm Beach. Fuentes was kicked out of the TPUSA conference venue and then supposedly returned to the convention center in disguise just a day after.

Update 7:37pm CT, Dec. 21: Fuentes returned to the venue again on Saturday night. He was cited for trespassing.

After I tweeted that picture I hung back and started filming and no joke like half a dozen security showed up and started looking for me… you’ll never catch me! pic.twitter.com/0JWr7XEJm6

BREAKING: White nationalist Nick Fuentes returned to Turning Point USA’S #SAS2019 Summit after being kicked out of the venue, and the police are now citing him with trespassing. https://t.co/yPWwDNuHf6 pic.twitter.com/lXcRyZkUEO

On Friday, Fuentes was speaking to a group outside the venue when a bystander pointed out that Shapiro was crossing the street.

Fuentes then crossed the road to try and bicker with Shapiro, who was with his family.

The interaction was posted to Twitter by controversial, self-proclaimed journalist Andy Ngo.

Nick Fuentes confronted Ben Shapiro and his family (including his young children) outside the TPUSA conference. pic.twitter.com/ZBaJBORkZA

Many criticized Fuentes for “heckling” Shapiro with his family by his side. While Fuentes supporters accused Shapiro of using his family as a “human meat shield,” as some dubbed it.

“It’s great to see you. Why did you give a 45-minute speech about me at Stanford? And you wouldn’t even look at my direction,” Fuentes yells at Shapiro while crossing the street.

.@benshapiro handling himself beautifully despite a nasty provocation in front of his children. Not easy to maintain one’s dignity while under this kind of attack but as usual Ben manages it. https://t.co/8MtO5NqpPU

It was alleged that anyone who spoke to Fuentes was barred from the conference and their event credentials revoked.

TPUSA attemtped to ban their own chapter leader Spencer Sims for being seen in a video with Nick Fuentes earlier today. @neoadventist pic.twitter.com/wl3FTAacS6

@TPUSA Has this habit of silencing or banning people for even associating with the America First afro-latino patriot @NickJFuentes they even fire their own for appearing in photos with Nick. Just ask @stclairashley #SAS2019 #TPUSA #Conservative Looks like Nazi Germany to me! pic.twitter.com/DoAAYDihkQ

All the rage currently at Turning Point USA’s SAS conference is followers of white nationalist and Holocaust denier, Nick Fuentes being kicked out of the venue and event credentials revoked. #SAS2019

When asked about students being tossed from the venue on Friday, a spokesperson from the City of West Palm Beach Police Department told the Daily Dot to “have a great day.”

The spokesperson also declined to answer inquiries regarding TPUSA paying the department for its security services at the event and directed the Daily Dot to contact the U.S. Secret Service.

The Daily Dot has been unable to reach the secret service.

Kirk, TPUSA spokespeople, and TPUSA CCO Benny Johnson did not respond to multiple of the Daily Dot’s requests for comment.

The Daily Dot has also reached out to Fuentes and Shapiro.

Trump is set to speak to the crowd of conservative activists at 5pm local time on Saturday.