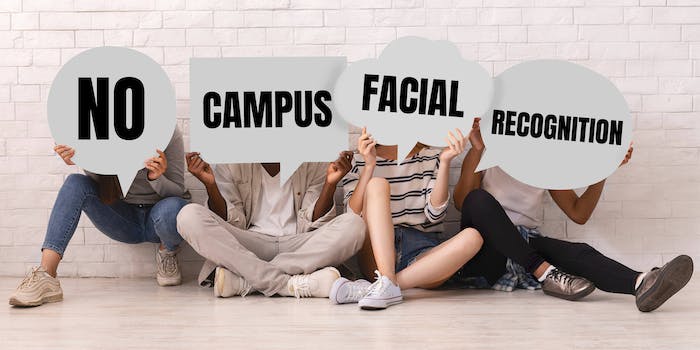 College students are leading the fight against facial recognition

There's a push on college campuses across the country.

As the school’s chapter president for Students for a Sensible Drug Policy (SSDP), she had worked to put together a forum featuring speakers from the American Civil Liberties Union (ACLU) and Detroit Justice Center to discuss the technology. But, just as the forum was about to go on, the school told her she couldn’t host it or bring up a resolution with the school’s student government expressing their concerns with the technology, Noon said.

But, thinking “who better” to explain to the school why its blocking of the event was wrong, Noon said she asked several national organizations to write letters to the school backing her up. Soon enough, Oakland Community College reversed its decision—allowing for the forum to be held late last week.

“Facial recognition is something that’s really important to talk about,” Noon, who is graduating this semester, told the Daily Dot this weekend. “It’s interesting to see how institutions react when you ask them to not use a technology—because they probably know as well how dangerous it is—but they also don’t want to give up on that valuable asset of having that data.”

“It’s empowering to kind of see how this did play out, because I do feel like the school has suppressed our student group in some sort of way… So this feels like a big win.”

Facial recognition software can scan people’s faces and match them to a database. It’s use–especially among the government and law enforcement–has been fiercely criticized. Some colleges have proposed using the software in CCTV systems, while some school districts have said the technology would be useful to catch unwanted people within school buildings.

It’s also been discussed to replace key cards for building entry and for student’s meal plans.

Abhi Dewan, a second-year student at George Washington University, has spent the last several weeks trying to figure out the best way to make sure facial recognition technology does not end up on campus in the future.

For Dewan, the issue was too important not to try and do something about it. He cited concerns about a college’s collected student biometric information potentially being hacked, the technology’s propensity for racial bias, and just the general idea of being surveilled every day.

Dewan, the university’s Students for a Sensible Drug Policy’s (SSDP) chapter president, has worked with his group to figure out the “inner workings” of George Washington University’s student government to find out how to get legislation that bans the technology’s use on campus. The goal, he said, is to have legislation on the books in case George Washington University decides to implement the technology in the future.

“This is an academic university, the whole point is we’re supposed to have challenging perspectives and constructive dialogue, but nobody has seen what this kind of mass surveillance, what the psychological effects of that are on anybody. Especially on academic discourse,” Dewan told the Daily Dot in a recent phone interview. “Why are we trying it at a university first, of all places?”

Both Oakland Community College and George Washington University have left the door open for using the technology in the future, but students like Noon and Dewan are among many across the country who have been pushing their college administrators to go on record about whether they plan to use facial recognition technology in the future as part of a campaign by digital rights group Fight for the Future and SSDP.

As part of that push, several colleges and universities in the U.S. hosted events yesterday as part of a day of action to shed light on the issue.

Colleges across the country tabled and students wore face paint to highlight the issue.

Fight for the Future and SSDP set up a scorecard where people can see which colleges have said they won’t use facial recognition technology and those who “might use” it. The website also allows people to sign a petition in favor of banning the technology on campus and gives students resources on how to introduce student resolutions on their own campuses.

UCLA, which reportedly had plans to implement the technology, ultimately decided to scrap those plans after push back from the student body and the groups.

Students raised concerns at a town hall meeting and Fight for the Future used Amazon’s Rekognition technology to scan UCLA’s basketball and football team’s faces, where it misidentified 58 student-athletes as the people in a mugshot database.

Not only students have called for a ban. Faculty members from more than 100 colleges have signed an open letter calling on colleges not to use the technology, saying it “threatens our human rights and privacy.”

While it is one thing for national organizations like Fight for the Future and SSDP to call for universities to ban the technology, having it come from students on campus sends a more personal message, organizers said.

“Students are on the front lines of the fight against surveillance. More and more, colleges and universities are purchasing technology that allows them to monitor students in deeply invasive ways,” Evan Greer, the deputy director of Fight for the Future, told the Daily Dot. “But students are drawing a line in the sand here. Facial recognition is a uniquely dangerous form of surveillance and it has no place on college campuses. Administrators need to listen to students, faculty, and security experts, not marketing people from tech companies selling surveillance products based in junk science.”

Erica Darragh, an outreach director at SSDP, said it was important for students to see what kind of impact they can make even while being in college.

“There’s something uniquely empowering for seeing people changing your world, changing your communities, especially with something like this,” Darragh said. “The first time a young person participates in an action and it’s successful, that’s a deeper motivation than something not working several more times. For me, I really hope it empowers people.”

All of the students who spoke with the Daily Dot said having a resolution on the books with the student governments at their respective schools gives students a foundation to fight back should administrations look to implement the technology in the future.

Fight for the Future and SSDP have a toolkit for students on how to put together resolutions on its website.

“It’s important to do it now before its in place. Most campuses haven’t installed facial recognition software, it’s relatively new. But it needs to be decided that we don’t use this technology now before it is in place, because it’s really hard to go back,” Noon said. “Once it’s installed, I don’t know how you take something back like that.”

Dewan added that students voicing their opinion in such a big decision like facial recognition on campuses gives it weight.

“If you think about any university, once they invest significant resources—whether they are monetary or otherwise—in any sort of technology, it’s so hard to convince them to take it back and waste everything they put in,” Dewan said. “If the universities in the future decide they want to do this, the students—which are the ones paying the bills, so they are the stakeholders most likely to be listened to over, say, faculty—they will have expressed their desire to not have that and it will be codified almost.”

Co-presidents of the SSDP chapter at Michigan State University, Kat Ebert, a fourth-year student, and Joel Kotyk, a third-year-student, said they are planning an event later this month—which could include face painting with patterns that can prevent facial recognition—with a goal of collecting signatures on a petition and raising awareness toward getting a resolution passed in their student government.

Ebert said that students have been receptive to the petition.

“Michigan State has already said they won’t use facial recognition software, but this resolution would prevent any third parties or partners of MSU from coming to campus and using facial recognition software,” Ebert said. “So if the university ever wanted to change its mind and say ‘well I think we are going to use it,’ then there would be something in place saying ‘hey, no, the students stand by this.’ It’s kind of to keep the university in check… I just think its something that is really, really important to start putting framework and guidelines in place for this type of data collection before it turns into 1984.”