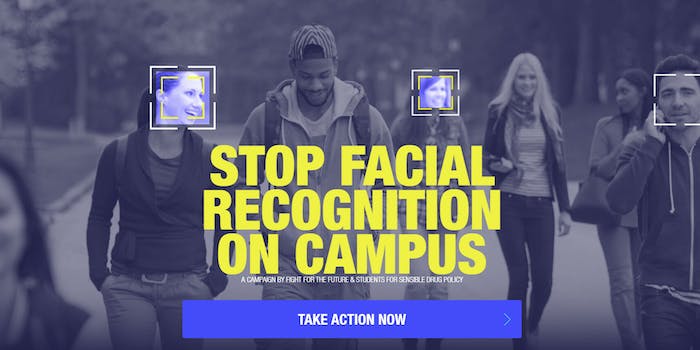 Some of the major colleges include Columbia, Cornell, the University of Michigan, and New York University.

More than 40 colleges have said they have no intention to use facial recognition technology on their campuses amid a push from digital rights group Fight for the Future and Students for Sensible Drug Policy.

The two groups launched a campaign earlier this month to ask colleges in the United States about their policies surrounding the use of the technology, including the ability for people to sign a petition asking for the institutions to “work together with students and staff to stop the use of facial recognition on college campuses.”

The petition includes an exemption for ethical research.

On Tuesday, Fight for the Future and Students for Sensible Drug Policy said more than 40 colleges have said they will not use the technology and launched a scoreboard for people to see where various colleges stand on the issue.

“College students should not be used as lab rats. Everyone, including faculty, staff, and community members have a right to know if administrations are using or planning to experiment with dangerous facial recognition technology on campus,” Evan Greer, deputy director of Fight for the Future, said in a statement, adding: “Whether it’s used for Big Brother-style monitoring of student behavior or for more mundane purposes like accessing meal plans or dorms, biometric surveillance technology on campus puts students’ physical safety at risk and violates their most basic rights.”

More than 30 schools, including Yale, Harvard, Ohio State University, Sarah Lawrence College, and UCLA did not respond to the groups about their intentions with the technology, they said.

“As this campaign continues, we’re ready to up the pressure on campuses that haven’t shared their facial recognition policies,” Erica Darragh, a board member at Students for Sensible Drug Policy, said in a statement. “Students deserve to know whether they are being experimented on with … ‘Black Mirror-like technology’.”

Fight for the Future has been critical of facial recognition technology, and has launched a campaign that’s been endorsed by more than 30 digital rights and civil rights groups, calling for lawmakers to ban the use of the technology by the government and law enforcement.

Update 11:38am CT, Jan. 29: In an email to the Daily Dot, Sarah Lawrence said it does not use facial recognition technology and does not plan to in the future.