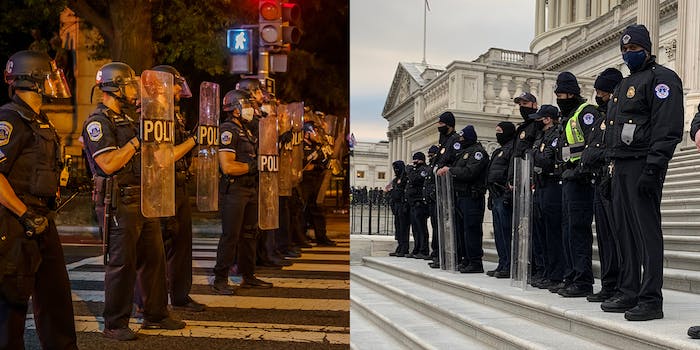 The Capitol riot was an explosion of racist hypocrisy

Merely existing as a Black person is a greater offense in America than white people staging a siege.

A white mob stormed the Capitol in Washington, D.C., on Wednesday, during one of the most important days of the country’s transition of power, the day that President-elect Joe Biden’s win was to be certified. During the insurrection, videos showed D.C. police failing to intercept the rioters as they entered the government building. One clip showed a police officer taking a selfie with protesters, and another showed officers moving barricades to allow the mob entry to the road near the building.

By the end of the day, one woman was shot and killed while trying to climb through a window to break into the building. Police on the ground watched as hundreds entered the Capitol, but only 13 participants were arrested (dozens of others were later arrested after a city-imposed curfew). It was a harrowing moment that brought the racist hypocrisy of America into sharp view.

On social media, Americans grappled with the differences between the government response to protests by groups fighting for their civil rights, especially Black Lives Matter protesters, and the response to mostly white supporters of President Donald Trump barging into the U.S. Capitol.

Many recalled the militarized police presence at Black Lives Matter protests last summer and wondered caustically how it was possible that the U.S. Capitol Police was unprepared for events that were publicly advertised for weeks across social media. Critics recalled the images of police deploying tear gas and rubber bullets against peaceful Black Lives Matter protesters, not to mention that over 14,000 people were arrested. Others rightly pointed out the outrageously disparate treatment of white Trump supporters compared to Black people by police.

Police shot Jacob Blake in his back seven times while he was trying to get into his car. Officers gunned down Breonna Taylor, who had not committed a crime, in her own home. An officer suffocated George Floyd with his knee during a routine traffic stop. Police shot Tamir Rice while he played in the park. John Crawford was killed while shopping in Walmart. The list of unnecessary Black deaths at the hands of police goes on.

Trump emboldened white supremacists to invade one of the nation’s most sacred spaces, and America allowed it. White insurrectionists climbed the walls of the Capitol and desecrated offices occupied by the country’s most influential and powerful leaders, taking pictures and even removing items. They destroyed private government property. They paraded through the halls of the Capitol while carrying Confederate flags.

Yet, D.C. officials and Vice President Mike Pence did not deploy the National Guard until an hour after the siege began. Video captured the moment police escorted an older white woman down the steps of the building after she participated in the mob.

The white mob’s attack on the Capitol proved that merely existing as a Black person is a greater offense in America than white people staging a siege. In fact, blackness can be punished by execution while insurrection can be rationalized, prompting theories and dialogue but little to no action.

On Thursday, the FBI put out a call asking the public to identify insurrectionists and erected a website to collect tips and information. But the act rings hollow because America has already made it clear what happens when white people break the law and attempt to undermine democracy: nothing. Insurrectionists were allowed to leave the Capitol after terrorizing members of Congress and damaging the world’s view of American democracy.

The session to confirm the presidential election resumed after the Capitol was secured, and members of Congress were noticeably shaken. Lawmakers decried the violence of the day and assured the public that the transfer of power would continue. “Democracy will triumph as it has for centuries,” Sen. Chuck Schumer (D-N.Y.) declared.

For much of White America, that is how this tragic saga ends: Biden’s victory and the assurance that Trump will soon leave office will assumptively usher in an era of healing for the divided country. White America can look forward to better and brighter days ahead.

But the stark contrast between the treatment of Black people fighting for their rights and the treatment of white people fighting to decimate democracy only underscores the fact that democracy for Black people does not exist in America. It revealed the truth that the police are not in need of sensitivity or de-escalation training because they are clearly capable of handling dangerous, highly charged situations without using excessive force.

“Police officers are more afraid of an unarmed Black man begging for his life while being pinned to the ground than they are of rioting white men who are calling for the overthrow of the government while brandishing weapons. It is impossible for Black people to ignore that police serve and protect white supremacy. Biden’s victory will not change that.

This is a moment of reckoning for the U.S., and in order to meet that moment, the country’s leaders must offer more than platitudes and whitewashed happy endings. Change will begin when officials acknowledge that we must challenge the foundation of American democracy itself, which has long been rooted in white majority rule. Putting people of color into leadership positions in the government—including Kamala Harris, the first Black woman vice president-elect—does not absolve America of its abuse of Black people and other oppressed populations. To challenge the American tenet of white supremacy, lawmakers and constituents must actually listen to and respond to the calls of action by people of color, especially women.

More than two dozen Democratic lawmakers and a growing number of Republicans have called for the impeachment of the current sitting president. “Impeach,” Rep. Alexandria Ocasio-Cortez (D-N.Y.) plainly tweeted on Wednesday.

“We can’t allow [Trump] to remain in office, it’s a matter of preserving our Republic and we need to fulfill our oath,” Rep. Ilhan Omar (D-Minn.) wrote in a tweet saying she would draft new articles of impeachment.

If democracy is truly to prevail and white American supremacy is finally to be challenged, the country’s leadership must act with haste to punish those responsible for the assault on the transition of power. Democracy cannot thrive in a country that more viciously attacks and kills its innocent citizens than strikes back at forces threatening to dismantle it.