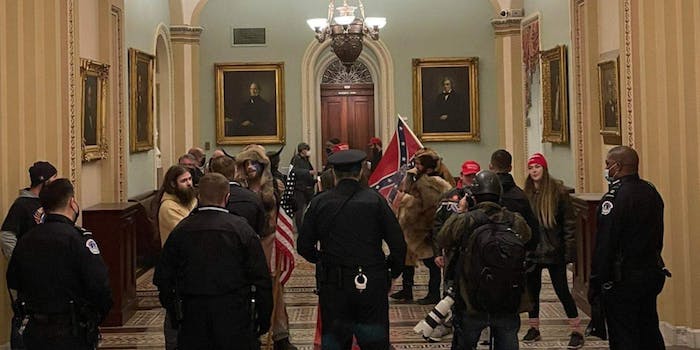 Man with Confederate flag spotted during breach of U.S. Capitol

The flag was flown outside the Senate chamber amid rioting from Trump supporters.

A man with a Confederate flag was among countless supporters of President Donald Trump on Wednesday who stormed the U.S. Capitol building.

The president’s most loyal followers, who were in Washington D.C. to attend Trump’s “Save America Rally,” began rioting after it became apparent that he would not serve a second term.

Amid the chaos, which included fights between Trump supporters and police, a man was seen prominently displaying a Confederate flag.

The man was later seen inside the U.S. Capitol building, which was flooded by hundreds of the president’s fans.

“The Confederate flag flying outside the Senate Chamber,” @NickKnudsenUS tweeted.

But the man apparently wasn’t the only one with a Confederate flag. Others reported seeing multiple individuals carrying one.

“Police officers are holding them steps away from the Senate chamber, which is locked,” @igorbobic said. “Senators are inside. I see a few confederate flags.”

Many noted the historical significance of the flag, which was used by pro-slavery states during the U.S. civil war, being inside the capitol.

“Reminder that even during the CIVIL WAR for SLAVERY, the Confederate flag never made it, was never CARRIED, inside the US Capitol,” @olifisk added.

The term “Confederate” later became a trending topic on Twitter.

The riot ultimately led one woman to be shot in the chest by police while attempting to breach the Senate Chamber, CNN reported.