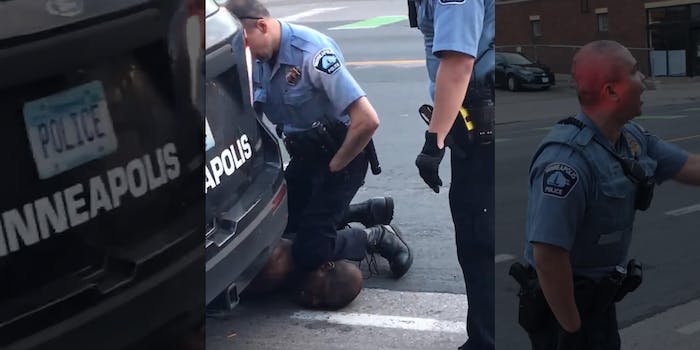 The man died shortly after an ambulance took him from the scene.

A Minneapolis police officer knelt on the neck of a motionless Black man as he begged to be let go and said he couldn’t breathe in a video taken Monday. The man died shortly thereafter.

A police statement said the two officers in the video were responding to a “forgery in progress,” CBS News reports.

“Officers were advised that the suspect was sitting on top of a blue car and appeared to be under the influence,” the statement continued. “Two officers arrived and located the suspect, a male believed to be in his 40s, in his car. He was ordered to step from his car.”

According to the statement, the man resisted officers after exiting his car. Police handcuffed the man and called an ambulance after they “noted he appeared to be suffering medical distress.”

The video, filmed and posted to Facebook by Darnella Frazier, begins with a white office pressing his knee into the man’s neck. He groans and tells the officer, “I can’t breathe.”

“Get up and get in the car, man,” another officer tells the man, but the white officer is still pinning him down with his knee.

Several onlookers criticized the officers in the video.

“You got him down, man. Let him breathe at least, man,” one says.

“That’s bullshit, bro. You’re stopping his breathing right there, bro,” says another. “Get him off the ground, bro. You’re being a bum right now.”

The man eventually stops responding under the officer. Several witnesses tell the cops he is unresponsive and demand they check his pulse.

“Don’t do drugs, guys,” an officer tells them in response.

An ambulance later arrives on the scene to take the man away.

The police statement confirmed that the man died shortly after the ambulance took him from the scene.

“At no time were weapons of any type used by anyone involved in this incident,” the statement said. “Body worn cameras were on and activated during this incident.”

The Minneapolis police department said the FBI is joining the investigation of the incident. Two of the officers involved have been put on paid administrative leave.