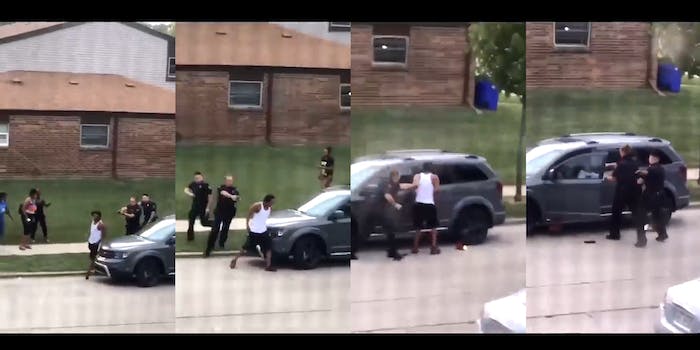 The video sparked outrage on social media and IRL protests.

A Kenosha, Wisconsin, man, Jacob Blake, was shot in the back at least seven times by police initially responding to a domestic dispute call. The video has stirred outrage across social media.

The viral clip begins as Blake attempts to enter a silver SUV on Sunday, with two Kenosha police officers pursuing, their guns drawn. As Blake opens the door, with his back to the police, the officers abruptly and repeatedly fire into his back. One officer can be shown pulling at Blake’s white tank top before multiple shots rang out.

The Kenosha News reported that Blake was trying to break up a conflict between two women when the police arrived, according to witnesses. In escalation, police attempted to taser him. The shooting happened after 5pm.

Though there are reports of his death, Blake is currently in serious condition at Froedtert Hospital in Milwaukee. The officers from the incident were placed on leave, and the city of Kenosha declared an emergency curfew until 7am Monday, following protests jolting the city into early Monday morning.

TMJ4 reporter Lauren Linder provided a report overnight confirming Blake was still alive, and in intensive care: “#UPDATE: Jacob Blake’s brother tells me Jacob is still fighting for his life. He says he just got out of surgery and is in the ICU. He also says while they don’t excuse @KenoshaPolice’s actions, Jacob’s mom urges protesters remain peaceful in #Kenosha. @tmj4 #Wisconsin.”

As people began to congregate around the intersections where Blake was shot, police officers reportedly arrived wearing riot gear. One video shows a police officer felled by a brick.

The groups would later move the protest toward the Kenosha County Public Safety Building.

Blake’s shooting is the latest to draw protests following the deaths of George Floyd and Breonna Taylor at the hands of police. In a brief statement, Wisconsin Gov. Tony Evers (D) called for greater police accountability.

“While we do not have all of the details yet, what we know for certain is that he is not the first Black man or person to have been shot or injured or mercilessly killed at the hands of individuals in law enforcement in our state or our country,” said Evers.

He continues: “We stand with all those who have and continue to demand justice, equity, and accountability for Black lives in our country—lives like those of George Floyd, of Breonna Taylor, Tony Robinson, Dontre Hamilton, Ernest Lacy, and Sylville Smith.”

In a statement released early Monday morning, the Wisconsin Department of Justice’s Division of Criminal Investigation will investigate the police shooting. DCI “aims to provide a report of the incident to the prosecutor within 30 days.” The statement also advised the public “to await identifying information from an official source.”

“Why didn’t officers physically restrain him?” asked Castro. “Or use their tasers? Or disable the vehicle?”