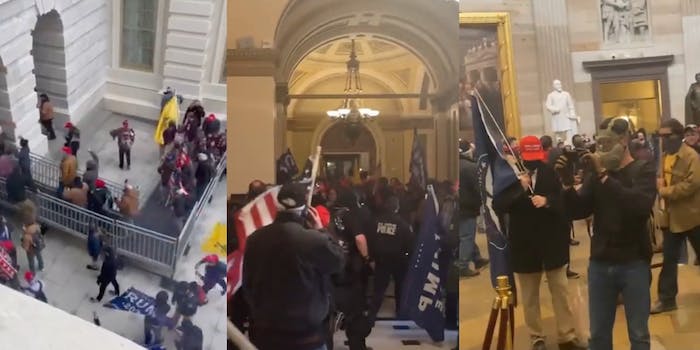 Many are calling out the apparent double standard.

Dozens of President Donald Trump’s supporters breached the Capitol grounds Wednesday afternoon as Congress attempted to certify the presidential election, resulting in lawmakers sheltering in place and Vice President Mike Pence evacuating from the Capitol, according to multiple reports.

As Capitol police are dispatched to quell the ongoing protests, many on social media—from celebrities to news correspondents—are calling out the apparent double standard between police response against Black Lives Matter protesters and pro-Trump protesters storming the Capitol.

“Imagine if #BlackLivesMatter were the ones who were storming the Capitol building,” CNN Contributor Van Jones tweeted.

“Just thinking about how many people were blinded and bloodied and broken all summer for doing far less than this,” one tweeted, referring to the several BLM protesters who were critically injured by police following summer protests after the police killing of George Floyd in late May.

“White privilege is storming the Capitol Building and not getting shot,” actor Feodor Chin tweeted.

“If those assholes looked like me they woulda been dead three times over before they got a mile from a Capitol balcony,” comedian George Wallace tweeted.

As of press time, the District of Columbia has deployed all of its National Guard members to support local police, according to CBS News.