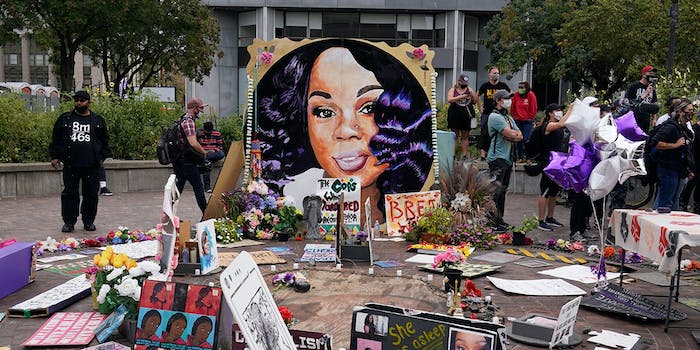 One of the three officers was charged in the case—and not for her death.

People online against police brutality are in an uproar over the charges filed against a former detective involved in the shooting death of Breonna Taylor.

Taylor was fatally shot in her bed by Louisville, Kentucky, police on March 13 during the execution of a late-night no-knock warrant. (Authorities claim that officers did knock.)

Police were searching for two men, neither of whom were present, who were suspected of drug trafficking. Taylor had previously dated one of the men. No drugs were found in her apartment.

Since then, Breonna Taylor’s name has become a rallying cry for people protesting police violence against Black people. Protesters around the country have carried signs bearing her likeness and name. She is often referenced alongside George Floyd, whose death at the hands of police in May sparked civil rights protests nationwide.

People have clamored for charges to be filed against the three police officers involved in Taylor’s death.

On Wednesday, the grand jury’s recommendations in the case against the officers was announced. Former officer Brett Hankinson was charged with wanton endangerment for shooting into an adjacent apartment. The other two officers were not charged.

Ben Crump, an attorney for Taylor’s family, called the outcome “outrageous and offensive.”

People immediately took to the streets and the internet to express their outrage. Breonna Taylor, the AG, grand jury, and Louisville trended on Twitter in the wake of the announcement. Many believe that all three officers should’ve been charged and that the charges should include criminal culpability for Taylor’s death.

“The state of Kentucky deemed the lives of Breonna Taylor’s neighbors to be worth more than her own. Let that sink in,” tweeted Jemele Hill.

“Wanton endangerment. That’s nothing. A life should be worth more. I’m not even surprised. Fuck this country,” said author N.K. Jemisin.

Many were specifically angry at Kentucky Attorney General Daniel Cameron for not filing charges. NPR’s Yamiche Alcindor reports that Cameron called Taylor’s death a “tragedy” but defended the decision not to charge the officers.

Elie Mystal, who writes for the Nation, accused Cameron of presenting a case designed to establish that the police were justified in killing Taylor.

Many shared such sentiments about Cameron, who spoke at the Republican National Convention last month. “Daniel Cameron’s crocodile tears are a troll,” tweeted author Michael Arceneaux.

Right-wing trolls and media jumped also into the fray to opine that police were justified in killing Taylor. As people took to the streets of Louisville to protest the verdict, local reporter Chad K. Mills reported that heavily armed militia members were marching downtown.

Correction 4:19pm CT, Sept. 25: This story has been edited to correct the spellings of Elie Mystal, Brittany Packnett Cunningham, and Yamiche Alcindor.