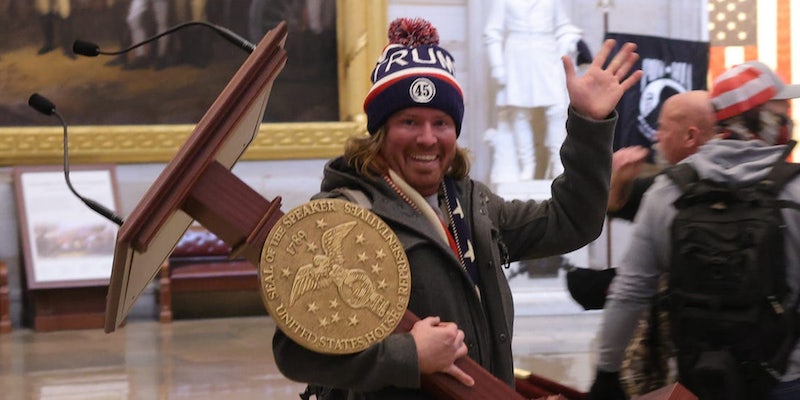 Many Trump followers stormed the Capitol. ‘Via Getty’ was not one of them

Some people really thought this Trump rioter's name was 'Via Getty.'

As news of yesterday’s storming of the U.S. Capitol by supporters of President Donald Trump came in at a dizzying speed, it appears that at least a few people online thought that the name of a man who was photographed carrying a podium was actually named “Via Getty.”

The confusion about the man with the podium’s name seems to have stemmed from a tweet by reporter Ryan Lizza, who tweeted the photo of the man, who can be seen waving at the camera while holding a podium in the U.S. Capitol building.

“Via Getty, one of the rioters steals a podium from the Capitol,” Lizza tweeted.

While Lizza was clearly citing where the photograph came from, visual media company Getty, it still duped some people who thought the man’s name was actually “Via Getty.”

“Absolutely losing it over the fact folks think this asshole’s name is ‘Via Getty,'” one Twitter user, who compiled several other tweets of people getting duped, wrote.

Needless to say, that’s not his name. The photo was taken by Win McNamee of Getty Images. Lizza tweeted the obvious after some people clearly failed to recognize that it was a citation.

“To be clear, ‘via Getty’ is not a person. It just means that this photo comes via Getty Images,” Lizza tweeted.

While some people may have been duped, others made “Via Getty” into a makeshift meme.

Others just found the fact that people thought “Via Getty” was actually the name of the man in the photograph as a moment of humor in otherwise stressful and tension-filled day.

“We need to immediately arrest Via Getty and his accomplices Via Reuters and Via Ap,” one Twitter user joked.