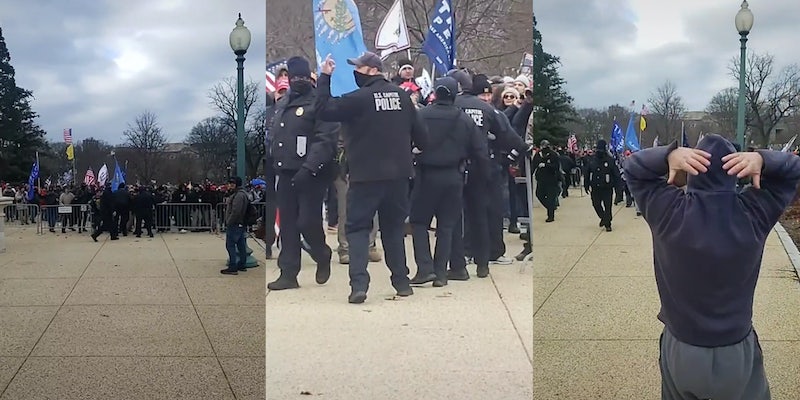 'And they just breached the Capitol again.'

A video has emerged showing cops outside the Capitol letting supporters of President Donald Trump past a barricade without pushing back during the siege on Wednesday.

Journalist Marcus Diapola posted the video on his TikTok page on Wednesday afternoon:

The video shows protesters and cops behind two sides of the barricade outside the Capitol building.

“Police are squabbling with protesters,” Diapola says from behind the camera.

“And they just breached the Capitol again,” Diapola says.

A man runs in front of Diapola’s camera, looking towards the Trump supporters, and motions his hands to welcome them.

Other videos of the storming of the Capitol showed the supporters attacking police. In one video, some Trump supporters are seen pepper spraying a group of officers after a mini scuffle at the barricades.

NBC reporter Tyler Kingkade posted a video showing a Trump supporter and an officer having a verbal argument, before the supporter tries to push the officer. The officer punches him in the face.

Another video shows a Black officer, facing a group of supporters inside the Capitol, running away from the protesters chasing him. The officer is first seen trying to reason with the protesters, who keep inching towards him.

At one point, the officer begins to run away from the protesters, who come chasing after him.

Diapola’s video came amid criticism online about D.C. police’s handling of Wednesday’s siege, when thousands of Trump supporters raided the Capitol, leading officials in the building to be evacuated.

Update 5:05pm CT, Jan. 7: A reporter spoke with Diapola, who took the video, and reports that the police on scene “definitely didn’t just open the barriers.” Diapola told the journalist that the Trump supporters “made a fist like they were going to punch the cops” and that there “wouldn’t have been any point in fighting.”

Diapola told the journalist the Trump supporters “pushed it aside and the cops abandoned their post,” referring to the barrier.