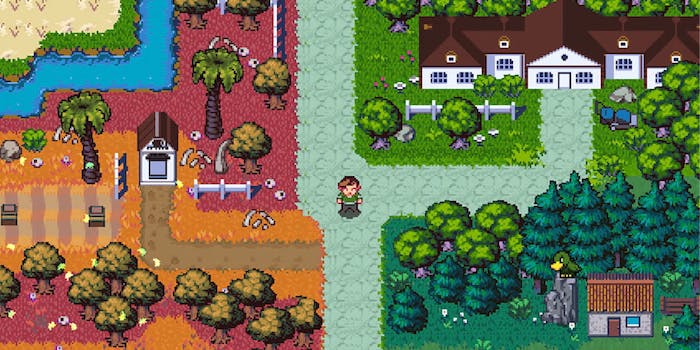 The Nintendo eShop is loaded with classic games, AAA titles, multiplayer options, and thousands of choices for you to spend your money and time with. That all sounds great until you’re trapped in the paralyzing reality of choice overload. There are so many games out there, how do you know which one you’ll actually like?

You might be tempted to default to the titles you recognize, the big-name games with a number and a subtitle after it to signal that it’s a long-running series that all the mainstream streamers and YouTubers are playing.

But doing that would mean missing out on the rich and expansive world of indie titles that live on the Nintendo eShop.

What is an indie game?

By definition, an indie game is a game created independently or without the financial backing or support of a major studio. It can be made by one person or a whole team, but most of the time it is a passion project created without the safety net of a AAA publisher.

Indie games have a reputation for being more adventurous than your standard major studio release — the games that are more recognizable but may put financial motivation first over artistic endeavor. As a result, indie games get to be a bit more experimental, more daring, and often way, way weirder.

Want to blast your way through the latest reimagining of World War III, check the best seller’s list. If you’d like to play a game where you have to navigate alien airports on unfamiliar planets that are all operated by dogs, try out an indie title.

Whether you’re new to the world of indie games or just feeling a bit overwhelmed by all the indie game names that are available, have no fear. We’ve picked out some of the best indie games on Switch for gamers of all types, and we can just about guarantee that at least one of these games is going to get your attention.

You might not have realized that Stardew Valley started as a humble indie game — and given just how big this thing has gotten, you’d be forgiven. After all, it has supposedly sold more than 15 million copies, spawned a board game, and can even be played in Teslas.

But forget the cultural impact — just experience this game and you’ll see why it’s become such a hit. If you’re playing the game on the Switch, you’re likely a Nintendo fan already, so the best point of reference is Harvest Moon. You’ll be taking over a farm, tasked with bringing it from a dilapidated state to a thriving ecosystem.

Along the way, you’ll cook, craft, explore and develop a life for your character as you grow along with your crops. It’s relaxing and addicting at the same time.

The year is 1935, and you are aboard the SS Hook, along for a cruise that has taken you hours from the shores of New York. A murder has happened on board the ship, and everyone seems suspicious — especially you, but that’s probably because you did it.

Overboard! Is relatively simple in its gameplay, as it’s a text-based adventure. But it is surprisingly complex in all the ways it lets you explore the story. Your goal is to avoid getting identified as the murderer, and you are able to do so by any means necessary. Just how far will you go?

There are very few games like Untitled Goose Game. It is a title with stealth aspects and puzzle solving, which might make you think of a game like Assassin’s Creed. But imagine that instead of playing as Ezio Auditore da Firenze, you play as a goose. And instead of killing your enemies, you mildly inconvenience them.

That’s about as close as you’re going to get to describing this game, which is better experienced than just discussed. Untitled Goose Game is surprisingly engaging and full of riotous laughs that make it well worth your time.

Creature in the Well

If there are two genres of games that feel lost to the era of the arcade, it is pinball and hack and slash. So why not bring both back at once? Creature in the Well combines elements of the classic gaming formats to create a dungeon crawling adventure that’ll make you wonder where you have to plug in quarters for an extra life.

Fight your way through ominous and eerie environments that will haunt and enchant you at the same time as you fight your way to the creature that hides deep inside a mountain, and feel the nostalgia wash over you as you go.

It’s the end of the world as you know it, but you’re gonna feel just fine exploring the beautiful world of The Long Dark. You’re dropped down into the wide-open wilderness of Canada, shortly after a geomagnetic storm has struck.

It’s freezing and you can feel the cold setting in as the sun goes down, so you have to do whatever you can to survive. Just one problem: the other predators of the woods are trying to do the same, and they aren’t going to let you get in the way of their survival.

Gather everything you need to stay alive and fight off predators, and don’t forget to take a minute to look around and take in all of the beautiful visuals that this game provides — just don’t let it kill you.

Remember Advance Wars? It was a smash hit for the Game Boy Color back in the day, but hasn’t received the same attention or praise that other Nintendo titles have over the years. If you still have a hankering for that classic and just haven’t been able to satisfy the craving all these many years later, check out Wargroove.

Take control of your own military and launch a campaign to take down the opposing forces in this turn-based strategy war game. The game comes complete with a variety of different commanders to head up your forces and fit your tactics and a surprisingly in-depth story as you fight for the throne of your kingdom.

Nintendo has somehow put together a strong roster of sports titles, most of which utilize an RPG element in a way that doesn’t feel tacked on or a simple excuse for microtransactions — which is, unfortunately, the way it typically manifests in other sports titles.

So if you’re into the quirky character building and arcadey take on sports that games like Mario Golf and Mario Tennis provide, you’ll likely get a kick out of Golf Story. You star as a down-on-your-luck golfer looking to reignite your love for the sport that you grew up with.

You’ll play through some wild environments where golf has never gone before as you work to regain your glory.