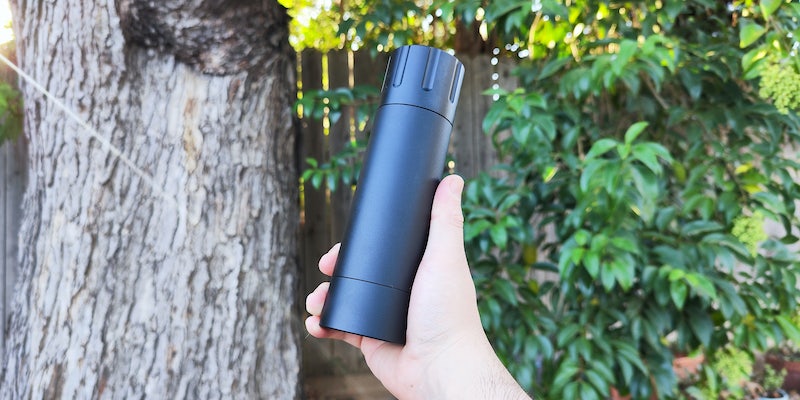 The ultimate flex for bougie kitchens.

If you’re interested in cooking content, there’s a good chance social media algorithms have already presented you with the Männkitchen Pepper Cannon. The expensive grinder claims to be the fastest and most consistent on the market, out-classing other grinders with its strength and speed.

For a couple of weeks, I’ve put this “pepper cannon” through the wringer to see if I can bring myself to recommend this expensive, albeit gorgeous, and powerful pepper grinder. Here’s a thorough review of the internet-famous pepper cannon.

What is the Männkitchen Pepper Cannon?

The Pepper Cannon is a brainchild of kitchen tech mavens Männkitchen which loosely translated means “My Kitchen.” It was developed as part of a successful Kickstarter campaign in late 2020 and first shipped out to customers in 2021. Since then, the pepper cannon has become popular with internet chefs and content creators such as YouTube stars like J. Kenji Lopez-Alt and Binging With Babish’s Andrew Rea. “This thing is a feat of engineering, and I’m excited to add it to my arsenal,” said Rea in a testimonial.

The cannon is made to not simply grind pepper, but grind it quicker and more consistently than any grinder ever has. It’s made from a single piece of aerospace-grade aluminum and has a gorgeous matte finish. Within the cannon is a powerful steel burr grinder, similar to one that grinds coffee beans. Cooks can grind the pepper directly onto food, or into a small base cup, which holds approximately ⅓ cup of ground pepper in case you want to dose it out using a measuring spoon.

The top of the grinder has a small button, which when pressed, allows you to remove the lid to fill the grinder with about ⅔ of a cup of peppercorns of your choice. It grinds standard black Tellicherry peppercorns, but will also grind green, white, pink, and specialty peppercorns as well. Männkitchen recommends against grinding salt, as it could corrode the burr grinder over time.

The Männkitchen Pepper Cannon is packaged like a brand-new smartphone. It’s even cradled in a molded cushion inside of an attractive black box. This grinder comprises three different pieces when you take it apart. There’s the top lid which you crank to grind pepper, the shaft where you deposit the spicy payload, and the bottom which doubles as a base and cup for ground pepper.

Männkitchen Pepper Cannon Review: Is It Worth It?

As previously stated, unboxing the Männkitchen Pepper Cannon was a stark contrast with every other grinder I’ve ever purchased. I’ve purchased a lot of pepper grinders, and most of them more or less run together. Many are manual hand crank models, while some incorporate battery power to make the whole task automatic. So why would anyone ever even begin to consider spending $199 on a pepper grinder? Männkitchen Pepper Cannon promises two things that separate it from the pack: speed and consistency.

Before putting its capabilities to the test I had to load the grinder with peppercorns. There’s a good chance you own a pepper grinder, and there’s an even bigger chance that it’s annoying to load with fresh whole peppercorns. The loading chute and capacity are sometimes pitifully small, causing a mess when it comes time to fill it up. The top lid of the Männkitchen Pepper Cannon pops off easily by pressing the button on it. The chute is a couple of inches in diameter with a small divider in the center, and loading it with peppercorns from a large bulk bag was anything but a slog. I didn’t spill a single peppercorn.

Then came the time to use it. The first major difference I noticed about it compared to the more affordable grinder I use is how heavy it is. Good kitchen tools are always a little heavier than they look. I’d go so far as saying it would likely work fairly well as a weapon to bludgeon a home invader.

There are quite a few popular pepper-forward dishes, but none that let the spice shine quite like carbonara. I began to grind pepper over al-dente pasta and was surprised to see how little I had to turn the crank before the rigatoni was fully seasoned. With my usual pepper grinder, it usually takes anywhere from eight to 12 cranks before I get the desired amount of pepper.

If I was cooking for a crowd, I could be hovering over the hot pan for as much as 20 seconds to ensure proper seasoning. Needless to say, I experienced a bit of a power rush after my first outing with the Männkitchen Pepper Cannon.

Of course, when it comes to seasoning food, sometimes, a lighter hand is better. And depending on the grind setting, a single crank may be more than you want or need in any given recipe. Luckily, there’s some freedom not simply in how you grind pepper, but how you dose it out. You can grind pepper directly into the base, which is wide enough to accommodate measuring spoons. Thirty cranks of the cannon filled the ⅓ cup capacity base about halfway.

Espresso aficionados can tell you the difference between good coffee and great coffee has a lot to do with how you grind coffee beans. Inconsistency is almost a certainty unless one opts for a burr-style grinder. The Männkitchen Pepper Cannon employs this same style of grinder favored by baristas to ensure similar consistency in grind size.

There’s a small knob on the bottom of the pepper cannon that allows you to make the grind coarse or fine, with plenty of possibilities in between both extremes. There are even labels that show you which direction to crank the knob so there’s no guesswork when you need to adjust the grind size. Both ends of the grind spectrum provide consistent results.

Different tasks require different sizes of peppercorns. Homemade pancetta needs a grind so fine it’s practically powder, whereas a light cracked peppercorn would be at home on a dry-aged steak. Männkitchen Pepper Cannon grinds whatever size of peppercorn you’re looking for, and it does it quickly and consistently.

…But at What Cost?

Another thing you may notice when picking up the Männkitchen Pepper Cannon for the first time is just how expensive it feels. Products made from thick aluminum with matte finishes tend to come off as pricier than they should be. Still, it’s only a pepper grinder. Männkitchen strongly recommends against filling it with salt. However, Männkitchen founder Cleve Oines says the grinder will also pulverize cumin, coriander, long pepper, cloves, dried rosemary, allspice, and even coffee, with no issues. Cooks may find some enjoyment in grinding custom spice blends.

Its cost is astronomical to say the least, and there’s no sugar coating that. A fairly good pepper grinder runs as little as $18. Granted, no other pepper grinder, affordable or not, provides the reliability and build quality the pepper cannon offers.

The Männkitchen Pepper Cannon is, to put it lightly, the best pepper grinder I’ve ever used, and it’s not even close. It’s got everything an amateur or professional cook needs from a pepper mill, from fast grind speed to great grind consistency. It’s even easy to fill and looks sexier than lesser models bought on impulse at Target.

If you do any amount of serious cooking, splurging on the pepper canon may make sense, as it’s virtually future-proof. The build quality is so sturdy, you could likely pass it on to future generations, like a well-seasoned cast iron pan. Additionally, it’s also a great buy if you’re looking to flex, and your kitchen is already full of state-of-the-art appliances and tools. The Männkitchen Pepper Cannon would be more than at home, in both amateur and professional cooking settings.