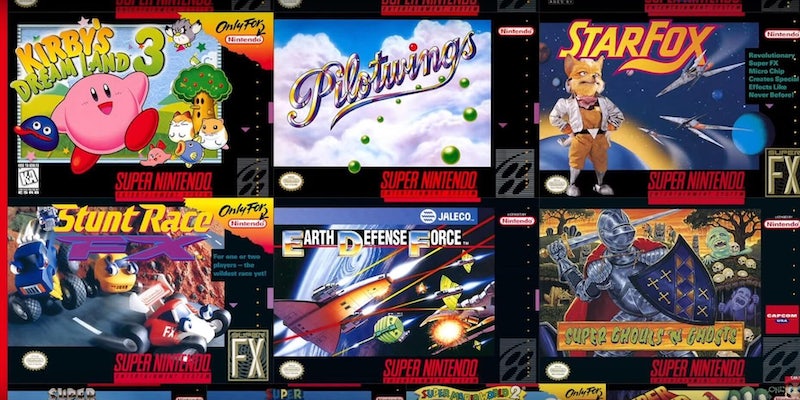 How to play your favorite SNES games on Switch

You can play 20 of the most beloved games of all time starting today on your Nintendo Switch.

Super Nintendo Entertainment System (SNES) games have finally been added to Nintendo Switch Online. Just in time for the service’s first anniversary, the long-awaited announcement was made during Wednesday’s Nintendo Direct. We’ve already covered the full list of games added today, but if that seems intimidating, here are some recommendations on what SNES Switch games to check out first.

How to play SNES games on Nintendo Switch Online

If you’re a Nintendo Switch Online subscriber, chances are you’ve already downloaded the Nintendo Entertainment System software that lets you fire up classics like Super Mario Bros and The Legend of Zelda. To get your hands on the SNES titles, just download the separate app and make sure your subscription is still ongoing.

You can head to the Nintendo eShop, scroll down to Nintendo Switch Online, and click the SNES option from that menu. It’s a free download for Nintendo Online members. If you aren’t already a member, you’ll get the option to subscribe from that screen as well.

SNES Switch Games: What should I play?

If you didn’t grow up on the Super Nintendo, you’re looking at an amazing selection of titles to dive into at the price of your subscription.

Super Mario World is considered by many to be one of, if not the, best platformers of all time. With a distinct visual style, the game feels like a children’s coloring book brought to life. Explore this game if you want to understand how the standard for precise character controls was set in 1990.

Another classic, A Link to the Past, is a perfect introduction to 2D Zelda before Link’s Awakening is remade for the Switch later this month (release date Sept. 20). Technically the third Legend of Zelda, this game redefined the series and has influenced game design for decades. The dungeons and boss fights found here are among the best in a franchise that has a stellar reputation.

Perhaps the most relevant title included is Super Metroid, a game that essentially named an entire genre. If you want to understand the inspiration for recent hits like Dead Cells, Bloodstained, and more, you owe it to yourself to traverse a hostile solar system with bounty hunter Samus Aran. All three of these games stand the test of time, and can provide dozens of hours of entertainment.

On the more casual end, titles like Super Mario Kart and F-Zero are great for finding a friend and handing off a JoyCon. And though they might feel outdated, the original Star Fox and Pilotwings are worth firing up and feeling out the controls for yourself.

Stunt Race FX is also available for the first time since it release, and a pair of Capcom classics—Demon’s Crest and Breath of Fire—are some of the more surprising, but welcome, choices in this first wave.

Playing these classics is awesome enough, but they’re a bit more than just direct ports. With added multiplayer functionality, these games can be played cooperatively online for the first time ever. But the best addition is the rewind feature, allowing you to skip back a few seconds at the push of a button. It may feel like cheating, but the obtuse save systems and checkpoints often included in SNES games shouldn’t make any of these excellent titles feel outdated.

Though it’s not yet available, Nintendo also announced a wireless SNES controller will be for sale exclusively to Switch Online subscribers

It’s safe to assume that Nintendo will continue adding titles in future updates, as it has with the NES games. What titles are you hoping to see added to the SNES Online service?