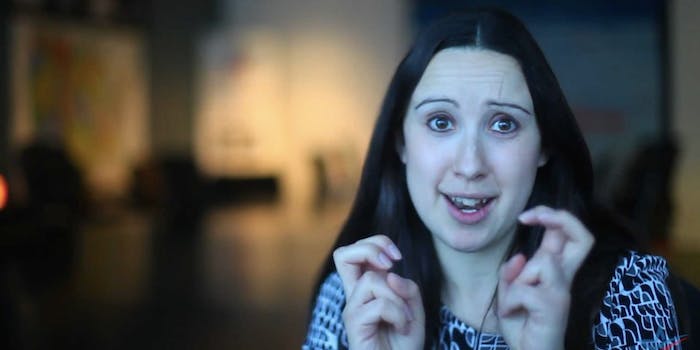 This video opposing net neutrality is too ridiculous to be criticized

This might be a new low for opponents of net neutrality

With the financial backing of billionaires and telecom giants, industry lobbyists are working overtime to derail the debate over net neutrality.

Open Internet regulations face stiff opposition from Internet service providers (ISPs). These companies stand to profit less under a plan to place broadband networks under so-called Title II jurisdiction, effectively turning Internet access into a public utility. President Barack Obama this week called on the Federal Communications Commission (FCC) to do just that, following some 4 million responses from Americans citizens to the FCC’s open call for comment this summer.

To counter this groundswell of public sentiment, net neutrality opponents have resorted to misinformation to win over new supporters. Content creators on the telecom industry’s payroll have churned out articles and videos in support of an Internet “fast lane,” a practice that World Wide Web creator Timothy Berners-Lee slammed as a form of “bribery.”

The worst propaganda is a Youtube video deceitfully titled “Clearing up Net Neutrality.” Produced by the conservative lobbying group FreedomWorks, which has reportedly taken money from both Verizon and AT&T, the 86-second production features a public relations employee hurling technologically illiterate accusations at supporters of the open Internet. The video, which is calculated to play on the layperson’s ignorance, unintentionally reveals the outright falsehoods of net neutrality opponents’ arguments.

FreedomWorks spokeswoman Iris Somberg, whose organization has represented the interests of Internet service providers (ISPs) before Congress, tells viewers that net neutrality “protects the Internet’s biggest companies at the expense of everyone else.”

“The same speed, the same prices, the same access, but all web content isn’t equal,” explains Somberg, who at one point mocks the “free and open Internet” by breaking her speech and air-quoting hard. “Netflix is not the same as a high school blog, and YouTube certainly isn’t the same as Facebook.”

To Somberg’s credit, it is true that two different things are not the same thing. It’s an astute observation coming from a FreedomWorks employee like Somberg, but one that has nothing to do with the mechanics of broadband technology.

Most viewers are probably unaware that Somberg’s organization has received funding from the very companies who stand to profit most from the death of net neutrality. FreedomWorks wants those naive individuals to believe that it’s actually speaking out against an injustice. The lie would be insulting if it weren’t so transparent.

“Net neutrality is not a level playing field,” says Somberg, suggesting that the technology which fostered the greatest period of innovation and economic growth in human history has been fundamentally flawed since the beginning.

FreedomWorks wants us to believe that net neutrality is “not the kind of equality the Internet needs.” Instead, it and other minions of America’s quasi-monopolistic ISPs have proposed a new form of Internet freedom, where cable companies are free from any rules demanding that the web be equal. In the model that FreedomWorks supports, industry magnates can profit through prejudice while eliminating any semblance of competition and enriching the wealthiest few among us.