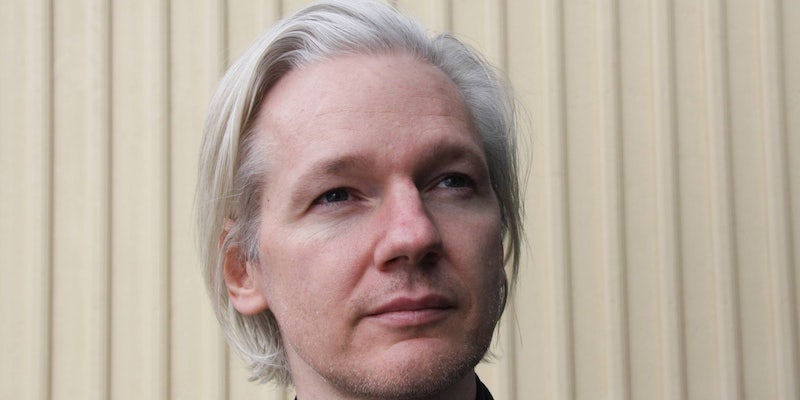 The enemy of my enemy is my #LOCKHERUP

Throughout the proud history of American democracy, citizens have weighed the moral and ethical dimensions of each figure or organization entering the political arena and impartially judged those actors on their respective merits—regardless of party or prior affiliation.

Just kidding! All of that stuff is just the shiny garlands and amusing baubles we place atop an ideological structure of tribalism and expedient rationalization almost entirely informed by race, geography, and socioeconomic status!

The group and its controversial founder Julian Assange burst into the national consciousness in 2010, with the release of a massive trove of diplomatic cables stolen from the State Department by U.S. Army Private Chelsea Manning.

With his espousal of a techno-anarchist philosophy and a stated desire to see the failure of the neo-imperalist aims of American foreign policy and military-industrial complex carrying out those policies, Assange was not a sympathetic figure on the political right.

In a poll conducted by the Pew Research Center in the wake of the diplomatic cables leak, 75 percent of self-identified Republicans believed that the release of the cables harmed the public interest. Among Americans as a whole, 60 percent viewed WikiLeaks’ release of the cables as harmful.

Jump forward to 2016: WikiLeaks has become the bane of Hillary Clinton‘s presidential campaign—dumping collections of emails stolen from top-ranking Democratic Party officials on a near-daily basis. These dumps have delighted Clinton’s electoral foes, who hope the revelations of backroom dealing contained in these emails will sink the former secretary of state’s presidential campaign and allow Republican nominee and former reality TV star Donald Trump to pocket the keys to the Oval Office.

As a result, Republicans’ views on WikiLeaks have changed. In YouGov’s poll, the results of which were released earlier this week, perceptions of WikiLeaks’ actions have shifted. YouGov found that, among Republicans, 74 percent said the recent leaks of the personal emails of Clinton campaign chairman John Podesta—which cybersecurity experts and U.S. intelligence agencies say were stolen by the Russian government—serve the public interest, and only 12 percent say it harms the public interest. For Americans in general, 46 approve of the Podesta leaks, while 28 percent oppose.

“Among Democrats the change is minimal: 53 percent who had heard of the cable leaks thought it harmed the public interest, while 48 percent say that the email leak in 2016 harms the public interest,” YouGov wrote in a blog post. “The American intelligence community has widely agreed that Russia is, in some way, behind the hacking of John Podesta’s emails. Few Americans are convinced by this, however. Only 33 percent of Americans believe that Russia was behind the leaks. Most Democrats (59 percent) believe that the Russians were behind the leak, while only 11 percent of Republicans agree.”