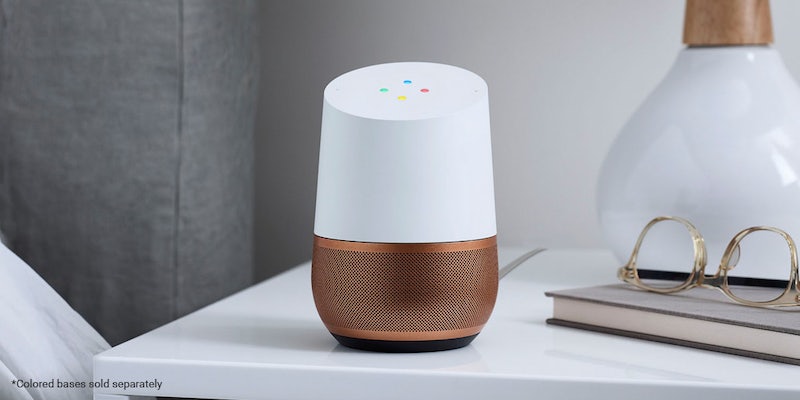 Is Google Home the right smart speaker for you?

Here's what you need to know before you buy one.

When you want to know something, just ask. Hopefully, Google Home will have an answer.

Google Home is the first smart home speaker from Google. It originally launched in 2016, and today there are a few spinoff models. Similar to other smart speakers such as Amazon Echo and Apple HomePod, you talk to Google Home to get information, control devices in your home, and listen to music.

Here’s everything you need to know about Google Home.

What is Google Home?

Google Home is a smart home speaker that you use in tandem with Google Assistant. It functions much like Amazon Echo in conjunction with Amazon Alexa.

The device itself is the size of a small vase or a hefty drinking glass. Some have said it looks like an air freshener or a decorative candle. It has an angled top that’s touch-sensitive, so you can drag your finger around it to change the volume, for example. Its top buttons also include a microphone and a few indicator lights. On the back, you’ll find a mute button, power indicator light, and power port.

How does Google Home work?

As a smart speaker, Google Home carries out simple commands that you give it using your voice or the compatible app. You can ask it to play music and podcasts, give you a weather forecast, or set an alarm so you wake up on time.

It can also act as the control center for your smart home. If you connect compatible products, such as smart light bulbs, you can control them by saying things like, “turn off the lights in the bedroom.”

To get started with your new Google smart speaker, you need:

The mobile app walks you through the setup process. Be sure you connect the smart speaker to the same network as your phone.

While you need a Google account to get started, anyone in your household who doesn’t have a Google account is still able to give voice commands to the device. Additionally, children under age 13 can get a parent-managed account through Google Family Link.

During setup, the app asks for your home location, whether you want to use Voice Match, and other questions that affect your personal information. Be sure to read through the information to make informed decisions.

What can Google Home do?

To use your device, you simply speak to it.

When speaking, you trigger voice command by saying, “Hey, Google,” or “OK, Google,” and follow with whatever you want. Some examples of things you can say are:

Some commands require additional connected services to use. For example, you can use the speaker to order drinks from Starbucks so that they’ll be ready when you get there. But it only works if you’ve already authenticated the Starbucks app on your mobile device to work with the Google Home app.

Another way to interact with the speaker is by using the touch interface on the top. By swirling your finger on it, you can change the volume. A single tap pauses and resumes playing music. You can also press and hold your finger to trigger commands without having to say, “Hey, Google.”

Google Home lists for $129. Currently, it’s marked down to $89 when you buy directly from Google. You can find it at other retailers, such as Best Buy and Kohl’s, for a similar price.

You can buy different bases to change the look of your device. It comes with a fabric gray base that you can swap for a metallic one (black or copper, $40 each) or other fabric colors, such as coral, violet, and mango ($20 each).

If you want a smart home speaker from Google that comes with a display, go for the Google Home Hub instead. It’s currently marked down to $99 in the U.S. (not available in Puerto Rico). You can also get it in Australia and the U.K.

What products work with Google Home?

Google Home works with a range of connected home products. The categories include:

Google Assistant, the intelligence behind the speaker, works with other apps and services, too, but keep in mind that much of it runs independently. In other words, you can use Google Assistant and many of the connected apps through your phone, even if you don’t have a speaker.

Should you buy Google Home?

The original Google Home sells for a fair price and is well-suited for people who love Google services. If you already use the Google Assistant on your smartphone, adding a speaker might be the natural next step. It isn’t the most well-connected smart speaker on the market, however, because Amazon Echo can work with many more smart home devices. But if Google Home supports the handful of devices you own or are willing to buy, then it could still be a good fit.