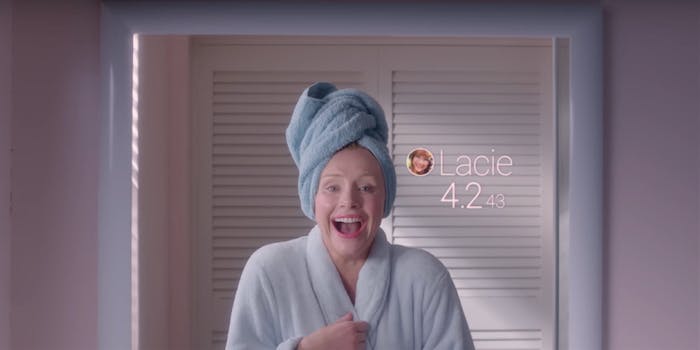 Ranking all 19 episodes of ‘Black Mirror’

As the show has expanded, so has its connected universe.

Now in its fourth season, Black Mirror’s connected universe is broader than ever. Charlie Brooker’s 19-episode series weaves technological themes with bleak social commentary on relationships, politics, and satire. (Some of the episodes have even seemingly predicted current technology, showing that the divide between the Black Mirror universe and ours isn’t that vast.)

With such a complicated combination of themes, it’s difficult to hone in on a definitive ranking, but we’ll try anyway, as a guide for where to start digging. If you’re new to the series or have some catching up to do, here’s our guide to the best Black Mirror episodes to watch.

This divisive season 3 episode really drives home a message about the dangers of the web, but man, it offers no enjoyable parts whatsoever.

This is one of Black Mirror’s more stylistically interesting episodes, centering on a robot that’s been programmed to kill. It just feels like one scene from a horror movie that has yet to be made.

Hashtags equal death in season 3’s hourlong exploration of hive mentality and social media. Two detectives (Kelly Macdonald and Faye Marsay) try to track down the source of a deadly electronic beehive that’s carrying out deaths generated in an online poll, but the lone “villain” unfortunately takes away from any commentary on social media pile-ons.

Season 4’s procedural exploration of memory gets outdone by its gorgeous setting and feels a bit half-formed. It could work as its own serialized show; the memory-retrieving tech at the center of the story has endless narrative possibilities.

Black Mirror offers commentary on gaming culture in season 3, and this episode sketches out a new type of immersive augmented reality for military combat. And no, it’s not a good one.

Season 4’s dating episode doesn’t have any major tragedy or message. It’s a sweet, simple story about two people who know they have a connection, but still have to bow to the algorithms that think they know better.

Directed by Jodie Foster, this is Black Mirror’s first real “parenting” episode, and it imagines a technology that allows a new set of boundaries for parents and kids. But should parents see everything their child sees?

Jon Hamm anchors this very special holiday episode as Matt, a man whose job is manipulation. His latest mark is Potter (Rafe Spall), and as he recounts his past lives, the present comes into focus a bit more.

Jesse Plemons stars as the captain of the USS Callister, and on the surface the episode seems like a Star Trek satire. But peel back a few layers, and this season 4 standout comments on fragile masculinity and the imbalance of power.

A woman named Victoria wakes up alone with no knowledge of who she is, only to be stalked by strangers filming her. It’s a divisive and uneasy episode that explores women’s (very public) suffering and the herd mentality of everyday surveillance, but the uncomfortable feeling never lets up. Brooker has said the original ending was supposed to include a public crucifixion, so here’s the “lighter” version.

The “hapless tourist does something stupid” narrative applies here, but “Playtest” mostly abandons that once said tourist (Wyatt Russell) is dropped into an augmented reality pulsating with his real fears.

Season 2’s episode about an entertainer (who plays a foul-mouthed cartoon bear) getting roped into running for office feels a little too on the nose now, but in 2013 it must have still felt absurd. The episode originally sprung from an idea for Nathan Barley, Brooker and Chris Morris’ fantastic early aughts series about new media idiots.

Before Get Out, Daniel Kaluuya was the inadvertent hero of season 1’s satire of reality TV and pop-culture consumption…though in this reality, “hero” has a murky meaning. Bing (Kaluuya) and Abi (Jessica Brown Findlay) are just two drones toiling for points in a world that wants you to consume every waking moment—and makes you pay for it.

For Black Mirror’s debut episode, the Prime Minister has sex with a pig on TV. Remember 2015’s #piggate? Brooker had to go on record saying the show had nothing to do with it. It’s a deep satire of politics and social media and a great episode to watch with family and friends to spark the inevitable debate about whether a world leader should screw a pig.

5) “The Entire History of You”

One of Black Mirror’s big themes is how humans adapted to technology that originated online, like blocking people in real life. Season 1’s finale renders a reality where we can rewind every moment of our life and obsess in very unhealthy ways. Here, a couple (Jodie Whittaker and Toby Kebbell) disintegrates over suspicions of infidelity, as every laugh and furtive look is called into question. It’s the opposite of Eternal Sunshine of the Spotless Mind. This episode has remake written all over it, and at one point Robert Downey Jr. was attached to adapt.

Though this episode hinges on a technology that allows you to replicate a deceased loved one, it’s really an ancient ghost story. After Martha (Hayley Atwell) tragically loses her partner Ash (Domhnall Gleeson), he returns in a different form. But he’s not quite himself. Can you still love someone when there’s “just a few ripples” of them left?

What’s in a “like”? That concept is colorfully explored in this season 3 episode, which stars Bryce Dallas Howard as a social climber obsessed with her personal rating. She also lives in a world where a good rating offers more access, and watching her balance a mask of sanity with urges to rage against those restraints is a pleasure (and something many women will find resonance in). Like many Black Mirror conceits, an experiment in personal credit is happening in real life now.

Season 4’s closer leaves us with Black Mirror’s heaviest episode yet. A young woman (Letitia Wright) gets a tour from the owner of the titular museum, played by the devilish Douglas Hodge. It tackles three mini-stories of digital swindling, but packs a third act that stays with you long after you’ve witnessed it.

Critically lauded for its portrayal of a lesbian relationship, and for not having a tragic ending, “San Junipero” is Black Mirror playing with the love story—and the boundaries of time. It’s visually stunning, and the tangible, powerful performances from Gugu Mbatha-Raw and Mackenzie Davis give it weight. It also won two Emmys in 2017.