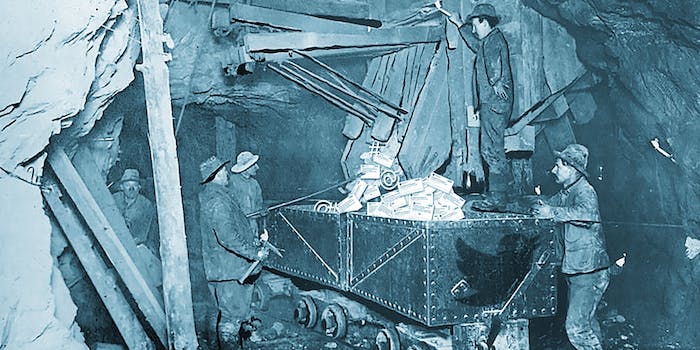 Twitter is sitting on a goldmine. The gold is all our tweets. And now, the extraction process has begun.

Twitter’s first earnings call didn’t go as well as it could have: stock prices fell nearly as hard as Woody Allen’s reputation after investors got worried the blue bird wasn’t growing quickly enough.

Twitter’s revenue results weren’t bad, really, but because monthly active user growth has slowed, there’s legitimate concern that Twitter is losing some momentum. Especially compared to Facebook, which just released its earnings report and showed everyone that it means business. And next to Facebook’s major mobile bragging rights, Twitter’s quarterly results looked even more uninspiring.

But the earnings report is not the most interesting announcement Twitter has made in the past few weeks.

The micro-blogging service announced two separate partnerships centered around data licensing. That these partnerships are coming in quick succession isn’t a coincidence. This is part of a larger strategy to turn social data into a business. And Twitter has plenty of social data.

The first partnership, with a company called Dataminr, shows that Twitter recognizes the value of big data analysis. Dataminr is a five-year-old startup that helps financial institutes make decisions based on social data. The company has proprietary algorithms it deploys to identify information relevant to its clients.

These algorithms are so accurate they already impacted global finance. When the AP was hacked and spread a rumor on Twitter that the White House was under attack, it tanked the Dow Jones Industrial Average, partly because Dataminr scraped the data and sent an alert to its clients. Even though Dataminr exacerbated the financial plummet, it also helped quickly fix the damage, sending notice to its clients that the information was false even before the AP could address the issue. The incident highlights the power a social network can have on the stock market, for better or worse. Correctly harnessing this power is what Datraminr, and now Twitter, are trying to do.

Dataminr originally used Twitter data to help finance clients, but its information torquing techniques can be applied to almost anything. For this initial alliance, Dataminr will make a product called Dataminr for News, and use pattern-recognizing algorithms to tell CNN when something noteworthy is going on.  The new Twitter partnership will help journalists break news, and Dataminr’s algorithms could also be applied to improve emergency alert systems, to detect crimes, to pinpoint emerging artists, and so on and so forth.

The second data partnership Twitter just announced, with music company 300, is another mutually-beneficial arrangement where Twitter supplies the data and 300 will create tools to analyze it. 300 will attempt to identify emerging musical acts, building software that scrapes Twitter’s public feed to cull the most promising talents.

This is a more specialized agenda, and it shows that Twitter is looking to establish data-based partnerships with companies with broader specialities; unlike Dataminr, which exclusively analyzes data and creates alerts, 300 is more of a full-service music content company. Twitter has not publicly acknowledged what 300 will do with the software it creates, but Twitter could use the experience to delve into developing native analysis softwares, or, once the value of the software is proven, it could begin charging 300 or businesses like it for access to the data spigot. Perhaps music labels would want a peek at what Soundcloud artists we’re busy tweeting about.

Both of these partnerships indicate that Twitter is serious about growing its reputation as a data provider, and while they are strategic and aren’t bringing in substantial revenue for Twitter, that could change. In the first half of 2013, Twitter’s data licensing revenue increased 53 percent through monetized partnerships with data resellers. Gnip and DataSift resell Twitter data to places like Klout, paying Twitter for the privilege. If Twitter’s non-paid strategic partnerships raise the company’s profile as a valuable data source, it will increase the prices for data licensing across the board. Right now, Twitter is approaching its data partnerships and licensing arrangements like a much younger and less established company, giving things out for free or for low rates, but if it gets companies to depend on its data, it can jack up the prices. Don’t discount the possibility of Twitter going native with data analysis, which is something Time’s Victor Luckerson has suggested.

Of course, Twitter’s data is only valuable if people keep tweeting in real-time. The company needs to remain a relevant digital destination for expressing opinions and sharing news if its data is going to remain worth paying money for. The company doesn’t need as many users as Facebook, but it needs enough users to be an approximate public opinion barometer—so its slow growth rate is a concern.

Twitter hasn’t publicly announced its intentions to expand its data licensing program, but expect more partnership announcements in the first half of 2014. Twitter is well on its way to securing a position as the data broker to beat.