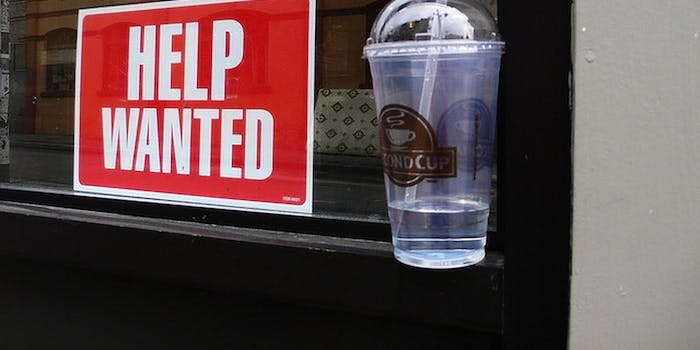 Employers rarely “holla back,” and other tips for Craigslist job applicants

Finding a good job in this economy is hard. Finding a good job on Craigslist is even harder. Sure, sometimes the posting itself is the problem—but usually, the applications are so ridiculous it turns employers away from the online classifieds for life.

You never know which postings are real, either. In just the past three months, pranksters sought applications for a “new administrative assistant wanted for Sotheby’s world-renowned auction house” and a “new Pope wanted for Vatican City’s world-renowned Roman Catholic Church.”

But even when an actual, non-scammy employer posts a genuine job listing to Craigslist, many applicants are doomed to failure because—well, they might know how to do the actual job, but they have no idea how to apply for it.

Which brings us to Rob Cockerham’s Cockeyed blog, which posted a list of “Tips for Craigslist Job Applicants.” What inspired this?

“My friend Tom is a great, smart guy who hires for a small business (Priveco.com). Yesterday he got the first batch of replies from job applicants from his job posting on Craigslist.

“He got a bunch of replies, some of which were inadequate.”

“Inadequate” is a vast understatement. Thing is, since the job applicants saw the ad on Craigslist, this means they have Internet access, which includes access to various search engines including Google. And typing “how to apply for a job” into the latter yields 802 million hits, pretty much all of which mention the need for a résumé.

Perhaps this is why, of Tom’s 14 complaints, the very first one said “No Resume = No Job. Seriously people, why bother emailing?” He also mentioned absent resumes in his third complaint: “Someone didn’t have a résumé, but the email was ‘sent from my iPad.’”

Another: “Don’t write to ask how to apply for the job when 300 other people have figured out that you send in a résumé.”

And another: “Just once I would like to see a former Subway employee NOT refer to it as a ‘sandwich artist.’”

Even if you remember to include your CV, you might make sure its listed achievements are relevant to the job you want and not too terribly out of date. As Tom said in complaint No. 9, “We received a résumé from someone who was voted ‘Most improved basketball player of 2000 from their elementary school.’ I don’t think it was a joke.”

When writing your cover letter (and résumé!), remember to use a formal, rather than colloquial, writing style. For example, employment professionals usually recommend ending cover letters with phrases like “I would welcome the opportunity for an interview with your organization. Thank you for your time and consideration.”

However, as Tom notes in complaint No. 8, “Employers rarely ‘holla back.’”

Tom’s complete list is here, and while you can laugh at the egregious examples he listed, you should also take seriously the advice Cockerham added at the end:

“Taking time to construct and send a professionally organized and formatted resume and the accompanying email is time well spent. Maybe you won’t get an interview, and that effort will be unrewarded, but you shouldn’t even bother applying when your first impression can be summarized as ‘extends minimum effort.’”