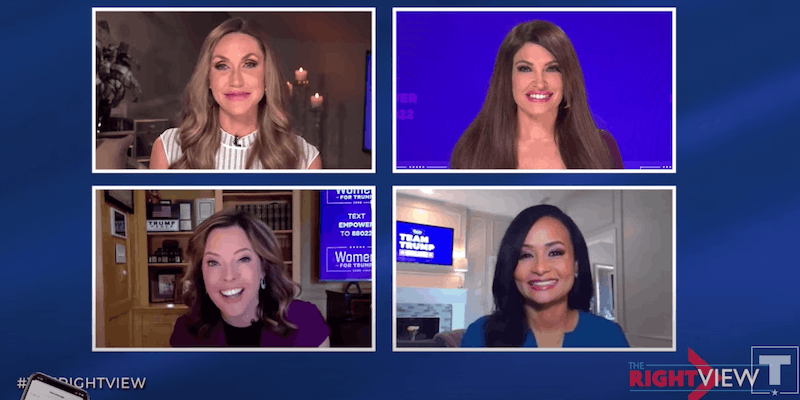 Who better than Donald Trump to launch a women's talk show?

President Donald Trump is admittedly no fan of The View.

So, on Wednesday night, his campaign launched its own weekly women’s talk show: The Right View (see what they did there?).

The roughly hour-long debut episode, streamed on social media, featured campaign standbys Katrina Pierson, Kimberly Guilfoyle, Lara Trump, and Mercedes Schlapp. The “girl’s night out,” as they called it, started out with praise for the President’s “bold, decisive leadership” in taking hydroxychloroquine as a preventative measure against coronavirus. While there are ongoing studies, there is currently no data supporting this use of the anti-malaria drug.

“I think it speaks volumes about the president, his character, his willing to, like, lead, and be the one to go first and then he says, ‘America first, come in right after me,'” said Guilfoyle.

Guilfoyle, who has been dating Donald Trump Jr. since 2018, later went on to ask Lara Trump, wife of Eric Trump, “President Trump, as you well know, once built the hottest economy in modern history. Why do you believe that he’s the only person who can bring the American dream and the American economy roaring back following the coronavirus?”

Aside from praising the President’s leadership, the women criticized Democrats, including House Speaker Nancy Pelosi (D-Calif.), presidential candidate Joe Biden, and Michigan Governor Gretchen Whitmer (“the meanest nanny you could ever have,” according to Schlapp), though the sustained target of their ire was the media.

Other topics covered included “Obamagate,” reopening states, and of course, the 2020 election. In between conversations and at the bottom of the screen, Trump campaign ads played, advertising the campaign’s official app and merchandise like hats reading “MAGA MAMA” and “Woke.”

Unsurprisingly, The Right View received a split reaction on social media. Some expressed their excitement about the show, which received hundreds of thousands of views across platforms.

Others made fun of the premise, including Jemele Hill, who retweeted it with a quote from Coming to America.

Ultimately, as one conservative commentator pointed out, just by creating buzz, the show accomplished what every politician is looking for during this socially-distant campaign season: getting eyeballs on ads.

The strategy is nothing new for the campaign, which launched #TrumpTV on Facebook during the 2016 presidential race.