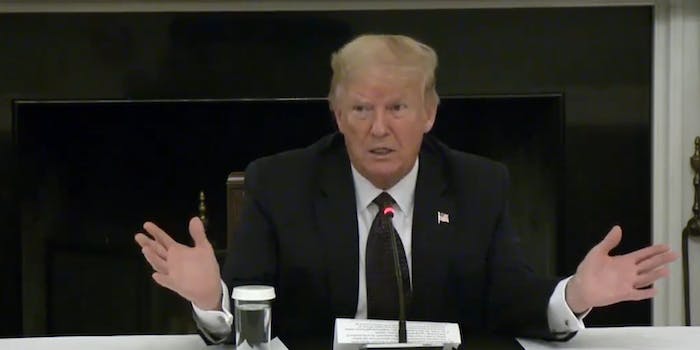 'It seems to have an impact,' Trump claimed. 'Maybe it does, maybe it doesn't.'

President Donald Trump admitted Monday to taking hydroxychloroquine as a preventative measure against the coronavirus.

Trump, who has repeatedly praised the unproven treatment, revealed to reporters that he has been taking the anti-malaria drug for around “a week-and-a-half.”

The president went on to cite phone calls he has received from medical professionals as the reasoning behind his decision to take the drug.

“Here’s my evidence: I get a lot of positive calls about it,” Trump said.

While some anecdotal evidence in a handful of cases have pointed to the drug’s potential for limiting the severity of COVID-19, those cases involved people already infected with the disease.

Trump claims to instead be taking the drug in an attempt to stave off an infection altogether.

“It seems to have an impact,” Trump added. “Maybe it does, maybe it doesn’t,” claiming that frontline health workers are also taking it.

Despite the president’s praise for the drug, actual studies indicate that hydroxychloroquine provides no benefit to those with COVID-19.

The Food and Drug Administration (FDA) even issued a warning last month after “serious heart rhythm problems” began appearing in coronavirus patients being treated with hydroxychloroquine.

Trump’s admission quickly stirred controversy online, with many questioning once again whether the president was putting people in danger by promoting an unproven treatment, especially as a preventative measure.

Fox News host Neal Cavuto desperately urged his viewers against taking the drug while pointing to a recent study by the Department of Veterans Affairs showing higher death rates for VA patients with the disease.

Rep. Ted Lieu (D-Calif.), a prominent critic of the president, also weighed in on the matter.

“Dear @realDonaldTrump: You may want to check with your physician before you continue taking #Hydroxychloroquine,” the politician said. “Repeated studies show it doesn’t work for #COVID19 patients. And for some people, the drug increases the risk of death.”

This is not the first time Trump has made controversial remarks in regards to treating the coronavirus.

Only last month, the president suggested that the disease possibly could be treated by injecting disinfectant or shining “ultraviolet light” inside of the body.

A man even died in March after ingesting fish take cleaner upon discovering it contained the ingredient “chloroquine phosphate.” The man’s wife, who was hospitalized as well, stated that they ingested the product after hearing the president praise hydroxychloroquine.