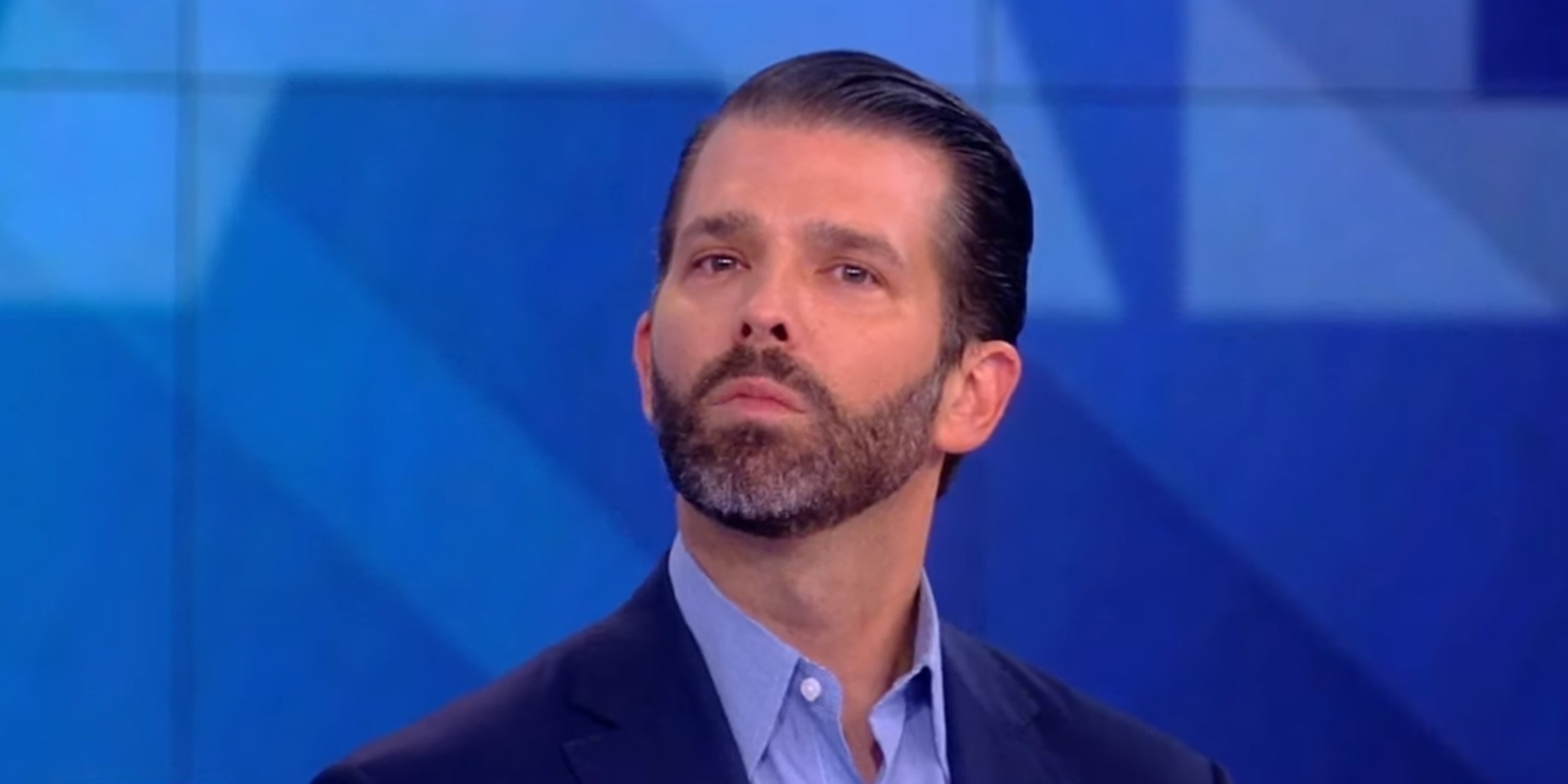 Trump Jr. went on ‘The View’ to promote a new book and wound up getting booed

The interview was all over the place.

Donald Trump Jr. made an appearance on The View on Thursday in which he was booed, defended himself for sharing the name of the alleged whistleblower, and went to bat for his father.

Trump Jr. and his girlfriend Kimberly Guilfoyle appeared on the show to promote his new book Triggered—but in the end, the interview was about everything else.

One of the hosts, Abby Huntsman, confronted Trump Jr. about him tweeting out an article that had the name of the alleged whistleblower that is at the center of the impeachment proceedings against President Donald Trump.

Here’s how the exchange went down.

“You did something that triggered a lot of people yesterday, including myself, by releasing the name of the whistleblower—the whistleblower whose complaint has led to impeachment hearings. The whole point of releasing a name is to intimidate someone, to threaten someone, and to scare other people from coming out. That’s something that dictators do. I lived in China, I’ve seen that first hand. That’s not what America does, that’s not what we do. We stand by our people. Why did you release the name?” Huntsman said.

“That’s a fair question,” Trump Jr. responded. “I think the reality of the answer is the whistleblower’s name was on a little website called the Drudge Report a couple of days ago, it was in Real Clear Politics. I literally quote tweeted an article that had the guy’s name in the title of the article.”

“I wish the outrage would be equal. There was no outrage when my family got an exploding letter with a white powder substance in it. They’re protecting a guy in the CIA and there’s great outrage… That’s a big part of the book. It’s not a level playing field in terms of outrage. We do live in an outrage culture.”

Trump Jr. continued to defend himself, and then soon everyone began talking over each other (including about whether Trump committed a crime by doing so).

On The View, Abby Huntsman confronts Donald Trump Jr for pushing the whistleblower's name, putting him in danger and he defends it by saying he's just a "private citizen" releasing it. The panel points out he's the son of the president, not just a regular Joe. pic.twitter.com/3mx88PeyLk

The discussion also touched on impeachment, including EU Ambassador Gordon Sondland revising his testimony to say that Ukraine military aid was linked to Trump getting an investigation into Joe Biden and his son.

Trump Jr. then said he thought Sondland revised his testimony because he was “afraid of being attacked like so many of us have for so long by a vicious left that’s running a one-sided campaign.”

The president’s son’s remarks were met with boos from the audience. (According to the Hollywood Reporter, Whoopi Goldberg told the audience that the booing was “fucking us up” and “messing with everyone’s mic.”)

Trump Jr. touted many of the economic numbers his father does and said:

“I understand that he’s controversial. I understand he’s offended a lot of people. But I also understand he took on the establishment, and that’s the premiere sin in American politics these days. And by the way, I’m not happy people interpret it that way, I don’t think that’s our intention.”

"You and your family have hurt a lot of people…" @MeghanMcCain says. "Does all of this make you feel good?"

Trump Jr.: "I don't think any of that makes me feel good, but I do think that we got into this because we wanted to do what's right for America." https://t.co/9coDczjMxa pic.twitter.com/hbbHQv24jV