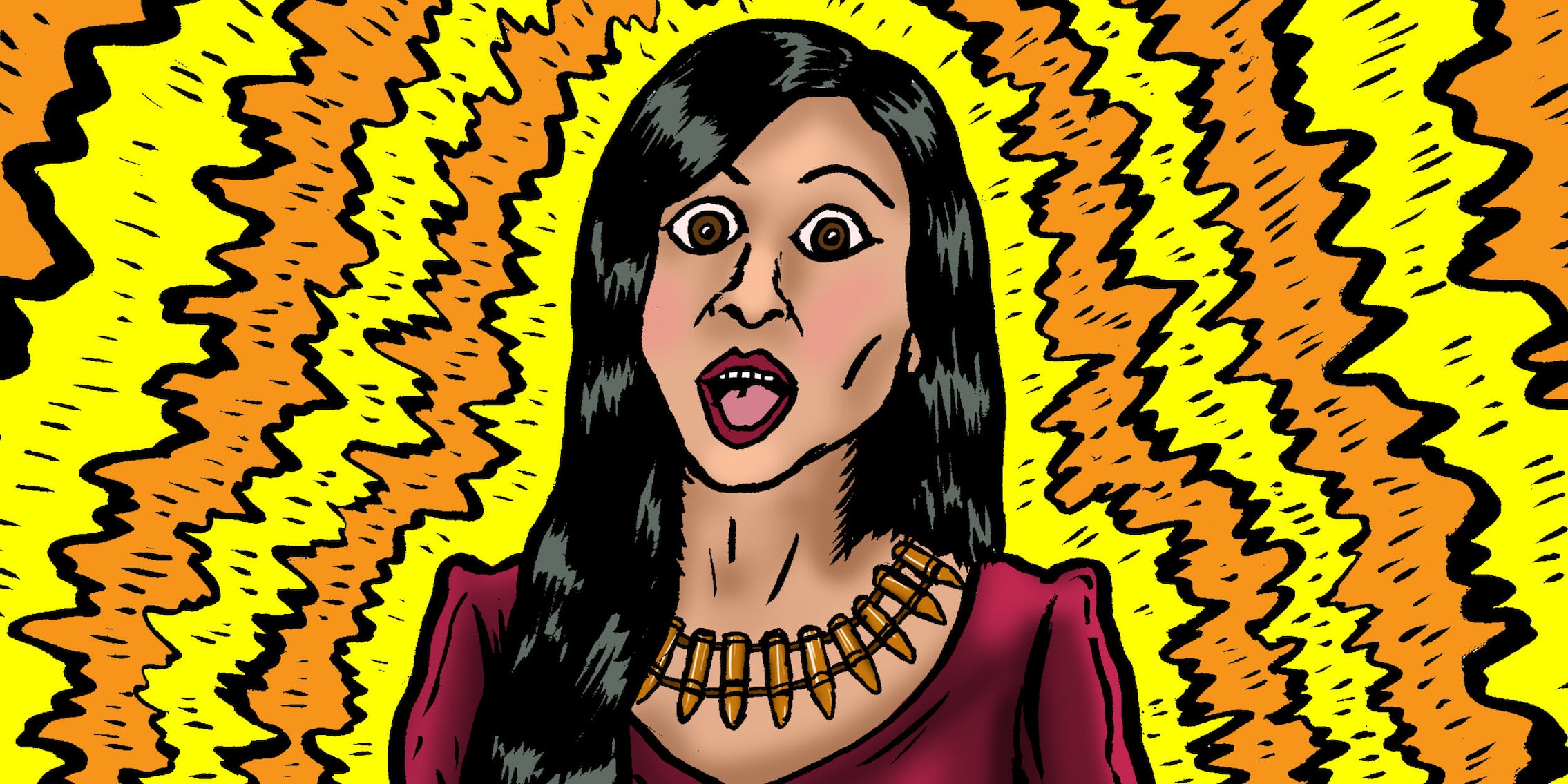 Donald Trump is getting the band back together. Only a little more than a year into his term in office, the President is looking forward to the next election. In addition to bringing back a few other key figures from his 2016 campaign, it was announced Tuesday that Katrina Pierson would join the election campaign as a senior advisor.

Pierson was known for her controversial statements and flexibility when it comes to the truth during the fall of 2016. There was no Trump misstep she wouldn’t defend, no scandal she wouldn’t deflect, and no fact she wouldn’t invent out of thin air

Following the election, it seemed that she had exited the national stage after she reportedly turned down a key White House appointment. It turns out that she just knows what she’s best at: being an unrelenting political flack.

In case you forgot just the kind of utter inanity Pierson is capable of, let’s remember some of her greatest hits from the first time she spent a summer carrying water for The Donald.

@TrillTitan This corrupt country has a head Negro in charge. What is he doing for blk children? He's helping everybody else,Why? @DOTCOM_MOM

If Pierson’s propaganda was sheer opportunism, that would be one thing, but the sad truth is that she may actually believe the things she says.

This wasn’t only awful tweet Pierson sent before she went to the Trump campaign. We’ve got years of insight from Pierson, including a now-deleted tweet, she wrote, “Perfect Obama’s dad born in Africa, Mitt Romney’s dad born in Mexico. Any pure breeds left?”

Race isn’t the only controversial topic that Pierson likes to tweet about. One other gem that still lives on her feed includes this muted response to criticisms of her bullet necklace.

Maybe I'll wear a fetus next time& bring awareness to 50 million aborted people that will never ger to be on Twitter https://t.co/UTomoyYXLK

But, let’s get off of Twitter and look at some of her best comments IRL.

“So what? They’re Muslim”

Early on in Trump’s campaign, the candidate was already floating a Muslim ban, and that meant that Katrina Pierson was defending a Muslim ban. In a conversation with Pierson, pundit S.E. Cupp tried to force a distinction between Islamic extremists and the broader Muslim community. Pierson’s response:

“So what? They’re Muslims.”

But, that wasn’t the only race baiting that Pierson would get in on during the course of the campaign.

Pierson’s campaign of disinformation on behalf of President Trump began in earnest during the primary. One of her best comments from the early stages of the campaign was, “The question here: is [Marco Rubio] a naturalized citizen?”

Of course, just as was the case with Obama, Rubio’s citizenship is indisputable. One of Trump’s first big forays into politics during the Obama era was the “birther movement,” and Trump and his team figured they ought to play the hits.

Compared some of the other lies Pierson would try during the campaign, attacking Rubio’s citizenship would come to feel rather quaint.

“Remember: we weren’t even in Afghanistan by this time,” Pierson said the summer before the election when Trump called Barack Obama the founder of ISIS. “Barack Obama went into Afghanistan, creating another problem.” When asked to clarify her comments, Pierson doubled down, saying, “That was Obama’s war. Yes.”

Even Pierson knew blaming a war started in 2001 on President Obama was a stretch, so shortly after the appearance, she would blame her comments on “audio disruptions.”

For the record, audio disruptions and echos should be fixed immediately. Especially when you say it out loud on the air. @CNN

It’s pretty amazing that Pierson would try to revise one of the biggest events in recent American history, but this wouldn’t be her only foray into military revisionist history.

Khizr Khan burst onto the national stage at the 2016 Democratic National Convention when he denounced President Trump’s policies regarding Muslims. Khan lost his son Humayun when he was killed in combat in 2004. The elder Khan’s comments led to a public feud between the two men.

As the war of words raged between candidate Trump and the grieving father, Pierson attempted to shift the conversation. She tried to blame the Humayun’s death on Barack Obama, even though he died four years before Obama became president. She told CNN, “It was under Barack Obama and Hillary Clinton that changed the rules of engagement that probably cost his life.”

Not only has Pierson dubbed herself an expert on military history, she considers herself knowledgeable in other areas as well.

Hillary Clinton has a brain disorder

“What’s new are the other reports of the observations of Hillary Clinton’s behavior and mannerisms, specifically with what you just showed in those previous clips, as well as her dysphasia, the fact that she’s fallen, that she had a concussion.”

Dysphasia is the “loss or deficiency in the power to use or understand language as a result of injury to or disease of the brain.”

Like Pierson, writers at the Daily Dot aren’t doctors, but if we had to choose between Hillary and Katrina as potential dysphasia sufferers…

Sometimes, you almost have to appreciate Pierson’s gift for spin. Almost. After Trump softened his stance on immigration during the campaign, Pierson came up with an all-time great spin line, “He hasn’t changed his position on immigration. He’s changed the words that he is saying.”

Now that Pierson is back on the campaign, perhaps we’ll get more reflection on the nuanced distinction between what Trump’s policies are and what he says they are. But there is one topic that Pierson spoke about during that last campaign that we definitely don’t need to hear anything else from her on.

August was an amazing month for Pierson, but this comment may have been the pinnacle of her career and it stands as one of the hall of fame moments from Trump’s campaign. During a debate with a professor from Johns Hopkins University about the removal of Confederate monuments, Pierson suggests that slavery is “good history.”

Despite being given multiple opportunities to walk back her comment, of course, Pierson didn’t. After all, that wouldn’t be her style. That wouldn’t be good history.

It’s difficult to keep track of all the women who have accused Donald Trump of sexual indiscretions at this point, but Katrina Pierson’s response to Jessica Leeds’ account of sexual assault perpetrated by Donald Trump on a plane was incredibly memorable.

We’ve already highlighted Pierson’s historical and medical expertise. It turns out aviation is also an area where she excels.

Leeds alleges that Trump groped her on an airplane in the early 1980s. Pierson told CNN that this was impossible because of the design of armrests on airlines at that time. She said:

“We’re talking about the early 1980s Don, seriously. Back then you had planes…first class seats had fixed armrests, so what I can tell you about her story is that if she was groped on a plane it wasn’t by Donald Trump.”

In defense of “locker room” talk

When the now-notorious Access Hollywood tape leaked a month before the election, Pierson had to defend that as well.

“I have two brothers. I was in sports. So I was around a lot of athletes.”

Like the rest of us, host Megyn Kelly was unclear how this was a defense, and pushed her on this point, asking, “Do your brothers talk about grabbing women by the genitals?”

Pierson continued, “I don’t know what they talk about specifically, because when I walk into the room, they stop those discussions.”

Time will only tell what sort of things Katrina Pierson will be tasked with defending during the next election cycle. One thing is for sure: she’ll be up to the challenge.