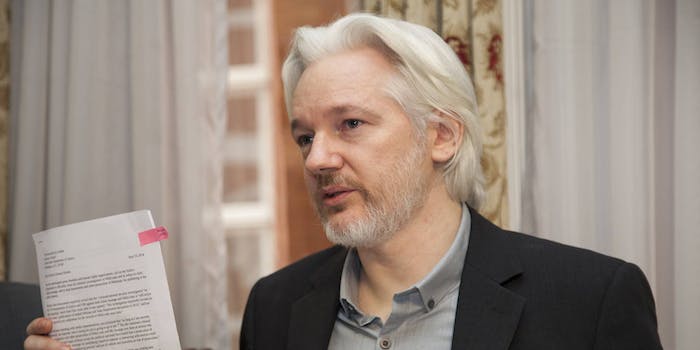 2010 emails to Hillary Clinton lays out ‘moral argument’ against WikiLeaks

There's a long history of bad blood between Clinton and Assange

Democratic presidential nominee and former Secretary of State Hillary Clinton is not a fan of WikiLeaks.

In recent months, the radical transparency organization has released troves of documents stolen for Democratic Party servers in an attempt to swing the election away from Clinton and towards her Republican rival, real estate mogul and former reality TV star Donald Trump.

In a recent interview, Assange called Clinton’s portrayal of WikiLeaks as a tool of Russia “a demon that is going to put nooses around everyone’s necks as soon as she wins the election.”

However the animosity between Clinton and WikiLeaks founder Julian Assange goes back the better part of a decade.

As the Daily Caller points out, an email chain from 2010, hosted on a searchable database maintained by WikiLeaks, shows a State Department staffer laying out an argument against WikiLeaks’ practices. The email was sent by Daniel Baer, then the deputy assistant secretary for the Bureau of Democracy, Human Rights, and Labor. Baer, who now serves as the U.S. ambassador to the Organization for Security and Co-Operation in Europe, laid out a five-point “moral argument” against WikiLeaks.

Weeks earlier, WikiLeaks had released a trove of hundreds of thousands of previously secret official State Department cables stolen by Private Chelsea Manning, who then went by Bradley, and leaked to WikiLeaks. It was one of the largest informational security breaches in American history and, unsurprisingly, the State Department officials attempted to find a rationale that would convince the public that the actions of Manning, who was sentenced to 35 years in prison, and Assange, who is hiding out the the Ecuadorian embassy in London to escape a Swedish sexual assault investigation, were not justified.

In the email chain, which is entitled “MORE WIKITHINK” and labeled as “unclassified,” Baer wrote:

1) Clear thinking demands avoiding simple analogies, or false syllogisms. Some have called WL whistleblowing. Some have lauded it for contributing to transparency. But the comparison and inferences don’t hold up. Whistleblowing is when someone reveals an act of official wrongdoing, and because it is official wrongdoing we assume that it’s in the public interest to know about this and hold the culprits accountable. Instead what WL is exposing, by and large, is a vast number of official acts of rightdoing—diplomats engaged often with partners from other governments or civil society, in solving the kind of practical problems that arise in a world made up of nearly two hundred nations. Many of the legitimate objectives of these officials—whether securing dangerous materials or negotiating agreements that will advance good governance and human rights—cannot be accomplished in a single conversation or interaction. Instead they are long-term ongoing projects that require trust, tactical sequencing of interactions, and above all, confidence. It’s not the ultimate objectives that are confidential—indeed, they are quite public and leaders routinely outline them in speeches, world peace, security, prosperity, etc. Rather it’s simply the case that accomplishing good objectives demands the kind of cooperative engagement that confidential relations permit, and so, while we can and should maintain a general commitment to transparency, we also can and should recognize that a responsible government that that is to be held accountable for delivering benefits for its people, will sometimes need to work in confidence in order to do so. Whistleblowing exposes misconduct that runs counter to the interests of citizens. Wikileaks undermines good conduct on behalf of citizens.

2) Absent a world government, it is the relations between states and peoples, whether through formal institutions or everyday conversations and connections, that provides global governance. The formal relations between states, made up of so many constellations of individual interactions, weave the fabric of a blanket of peace and stability, one which creates a permissive environment in which states can live up to their responsibility to provide for and protect people’s rights. The Universal Declaration of Human Rights and the ICCPR and other documents international and domestic lay out the standards, but it is the quality of governance at both the domestic and international levels that determines whether or not people enjoy those rights in their everyday lives.

3) Some of those who are cheering Assange mistakenly believe that his action constitutes a speech act in a debate about good governance—that his action constitutes a kind of critique, a demand for a particular kind of better behavior. But it doesn’t constitute a critique or a demand—this is not an exchange with another interlocutor about a particular position or action. The exposure of 250,000 cables isn’t a critique of any one of them; it’s an attempt to harm the medium itself—confidential communication among governments—rather than a rejection of the messages. This isn’t part of a particular debate, it’s an action that undermines a key pillar of the system of governance in which all debates can safely take place, in which individuals can, if they’re lucky enough to live in the kind of places that Assange has spent his life, make specific criticisms of the government, march, speak out, protest, and do so with the protection of the rule of law.

4) In this specific case it is the communications of the United States that have been compromised. We regret the embarrassment this has caused with some of our partners. We deplore the risk it has imposed on innocent people on the frontlines of struggles against corruption or rights abuses around the world. But we are taking steps to manage the consequences, address them, and to make future incidents less likely. But the attack on legitimate confidential relations between governments is not an attack on the particular government in question, it’s an attack on the constellation of relationships and interactions referenced above, the informal agreements, debates, discussions, etc through which governments around the world manage—imperfectly to be sure—to work out their differences and find common ground and common cause; to maintain global order and stability on which the security of their citizens and the citizens of other nations depends; to support and sustain the commercial networks that can augment global prosperity; to do, in short, what citizens count on their governments to do.

Clinton, in her characteristically terse email style, responded with an approving “Pls print.”