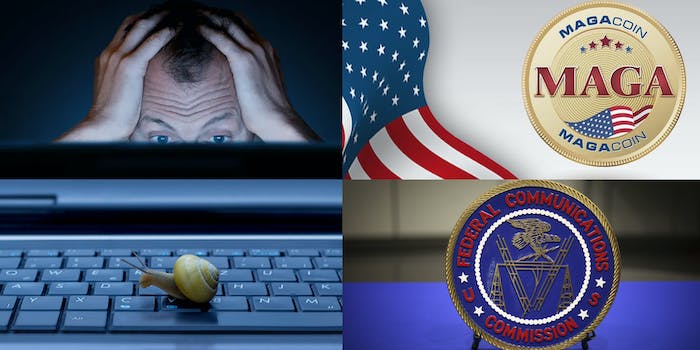 Spectrum, Comcast have the most complaints to the FCC about the Emergency Broadband Benefit roll out

Millions of people signed up for the Federal Communications Commission‘s (FCC) Emergency Broadband Benefit (EBB) program since it launched in mid-May—but records show that Americans faced significant frustrations with their internet service providers amid the rollout.

The EBB is a temporary $3.2 billion coronavirus-related program that allows for eligible Americans to get a monthly discount to help pay for their internet access.

The criteria for eligibility clearly intends to help Americans who need it most: Having income at or below 135% of the Federal Poverty Line; being enrolled in SNAP, Medicaid, or Lifeline; or losing their job because of the coronavirus pandemic are just some of the eligibility requirements.

Enrollees apply through the Universal Service Administration Company’s (USAC) website before using that approved application to enroll with their ISPs.

The pandemic sharply underlined the importance of internet access. As soon as the EBB launched, millions of people from all 50 states enrolled in the program, showing the program’s popularity and the necessity for high-speed, affordable internet.

While hundreds of providers agreed to be part of the EBB, customers say issues have cropped up along the way. The Daily Dot reviewed hundreds of complaints that customers filed with the FCC from May 12 to June 28 that were obtained through a public records request.

In the complaints, customers told the FCC how providers said the EBB didn’t apply to their current service plans, explained how they had issues with providers accepting their applications, and noted they waited months to have their applications approved by providers.

A review of the nearly 1,000 total complaints customers made in May and June shows that some of the country’s largest providers topped the list. Spectrum had the most complaints filed about them to the FCC with 209. Comcast followed with 172 complaints.

But nearly every major provider—and dozens of smaller ones—had complaints filed against them to the FCC. Cox had 89 complaints, AT&T had 66 complaints, and Frontier Communications had 26.

In a statement to the Daily Dot, the FCC said it was “aware of problems some consumers are having and have been working with both USAC and participating providers to make this process smoother for consumers.”

While the process may be more streamlined with the recent changes, experts say that it’s likely the 1,000 complaints filed with the FCC were only a portion of the problems people faced.

Ernesto Falcon, a senior legislative counsel at the Electronic Frontier Foundation (EFF), said that the nearly 1,000 complaints filed by consumers since the EBB’s launch in mid-May was “high,” and noted that he expected many more consumers were having issues.

“I think on the emergency basis they’ll be some missteps, but 1,000 complaints is pretty high because it’s not like every single person running into a problem knows to go to the FCC,” Falcon said. “I kind of treat that as a sample of what is probably a much larger number of complaints that are happening out there.”

You can read all of this story here.

If you’ve never tasted homemade pasta, you’re truly missing out. It transforms the beloved comfort food into something else entirely. But making it by hand can easily take all day. While there’s nothing like the taste of food made slowly with love, making it yourself is a lot easier with a pasta machine. Read on to learn how it works (and all the bumps we encountered along to way to that sweet homemade semolina)…

The recently announced digital currency, according to the MAGACOIN website, was created by “America First Conservatives” who believe the 2020 presidential election was stolen from Trump.

MAGACOIN is promising 100 coins to those who register on its website “in order to build a robust MAGACOIN ecosystem.”

The site also notes that 10 million MAGACOINS were donated to the SuperPAC MAGACOIN Victory Fund as part of an effort “to support MAGA candidates across the country who will fight for individual rights, religious liberty, protecting the unborn, the 2nd amendment, freedom of speech and the entire America First Agenda.”

The Daily Dot was able to sign up for access to MAGACOIN by using a disposable email address and the password “password,” calling into question the security of the MAGACOIN wallets. MAGACOIN also fails to offer two-factor authentication in order to further protect users’ funds.

Business records show that earlier this month a MAGACOIN LLC was registered in North Carolina by Reilly O’Neal, a prominent political operative out of North Carolina.

O’Neal’s clients have included Roy Moore, a former chief justice of the Supreme Court of Alabama who was accused of sexual misconduct with teenage girls, and Corey Stewart, a Virginia politician known for his vocal support of Confederate monuments.

Consumer Reports and numerous other advocacy groups are kicking off a nationwide campaign to crowdsource information about people’s internet speeds.

“The internet is not a luxury—it’s a necessity,” Marta Tellado, president and chief executive officer of Consumer Reports said in a statement. “Broadband must be available, accessible, and affordable for all, including low-income households and rural areas. For too long, the true cost and quality of internet service has been hidden and obscured. We want to shine a light on what’s really happening, so every American can have the quality internet they need to succeed today and into the future.”