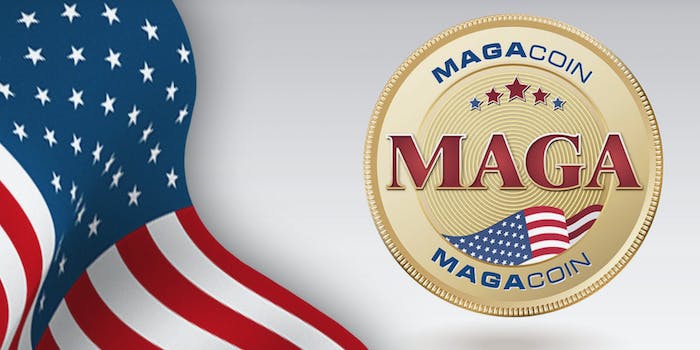 The cryptocurrency wants to represent the '75 million voters who were disenfranchised.'

The recently announced digital currency, according to the MAGACOIN website, was created by “America First Conservatives” who believe the 2020 presidential election was stolen from Trump.

“Approxiamtely [sic] 75 million MAGACOINS were created to represent the 75 million voters who were disenfranchised on November 3rd, 2020,” the site adds.

MAGACOIN is promising 100 coins to those who register on its website “in order to build a robust MAGACOIN ecosystem.”

The site also notes that 10 million MAGACOINS were donated to the SuperPAC MAGACOIN Victory Fund as part of an effort “to support MAGA candidates across the country who will fight for individual rights, religious liberty, protecting the unborn, the 2nd amendment, freedom of speech and the entire America First Agenda.”

The Daily Dot was able to sign up for access to MAGACOIN by using a disposable email address and the password “password,” calling into question the security of the MAGACOIN wallets. MAGACOIN also fails to offer two-factor authentication in order to further protect users’ funds.

Business records show that earlier this month a MAGACOIN LLC was registered in North Carolina by Reilly O’Neal, a prominent political operative out of North Carolina. O’Neal’s clients have included Roy Moore, a former chief justice of the Supreme Court of Alabama who was accused of sexual misconduct with teenage girls, and Corey Stewart, a Virginia politician known for his vocal support of Confederate monuments.

The Daily Dot reached out to O’Neal to inquire about the coin but did not receive a reply.

Although the cryptocurrency is just days old, it nonetheless doesn’t appear to have caught on among Trump supporters. The cryptocurrency’s collective social media presence, including profiles on Reddit, Discord, Facebook, and Twitter, reaches less than 300 total followers.

While you cannot yet purchase it, the cryptocurrency is currently mineable.