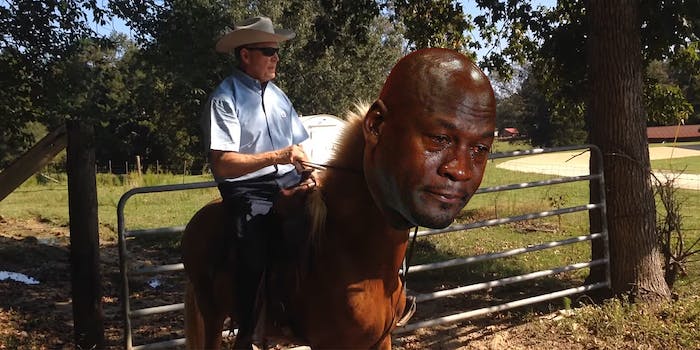 The right is falling apart online over Roy Moore’s loss

A farewell to Roy Moore, cowboy-style.

That’s literally the horse Roy Moore rode in on—Sassy—getting Crying Jordan’d on its way out the door.

Moore’s loss to Democrat Doug Jones was momentous for numerous reasons. While Jones in the Senate could possibly grind the Republican agenda to a halt, the win came as cathartic at the end of an abjectly awful 2017. During his race, Moore was revealed to be a racist, retrograde xenophobe who was accused of molesting numerous teenage girls. And because of our twisted politics, Republicans still supported him, a literal vote against human decency.

The win by Jones—who prosecuted Klan members—felt something like righting an America that had gone off the rails.

"They're not gonna keep 'em off the field tonight!" pic.twitter.com/n82yhZhgk8

After Roy Moore said in a speech that the vote count was too close to concede—despite having clearly lost—people lept on that irony with glee.

Looks like Roy Moore has lost this election but is unwilling to concede. How terrible for something to happen to him without his consent.

Once again, Roy Moore doesn't understand that "no" means "no." Smdh #AlabamaSenateElection

But for all the joy on the left, it was the right that was melting down online, rife with excuses and blame. Former White House counselor Steve Bannon got his share of it.

Cam we stop now with the “Bannon is a masterful strategist” nonsense? I’ve never seen such descriptions used more and deserved less.

Next time maybe Bannon will won’t fight Trump’s primary endorsement out of ego and cost the GOP a senate seat.

Some thought Moore lost because he didn’t turn this into a referendum on the non-existent nefarious parts of government.

The right wasn’t taking it well at all. Bill Mitchell was in fact surprised people came out to vote against an accused pedophile, diving into a Louise Mensch-style conspiracy theory about turnout.

So Democrats turned out 92% of their 2016 vote in a Special Election? Am I the only one that thinks that sounds like some bullsh*t going on?

President Donald Trump, for his part, wanted people to know that he always thought Roy Moore was going to lose.

The reason I originally endorsed Luther Strange (and his numbers went up mightily), is that I said Roy Moore will not be able to win the General Election. I was right! Roy worked hard but the deck was stacked against him!

This election turned things around so much that somehow Mike Huckabee was the conservative voice of reason.

Roy Moore won’t concede; says will wait on God to speak. God wasn’t registered to vote in AL but the ppl who voted did speak and it wasn’t close enough for recount. In elections everyone does NOT get a trophy. I know first hand but it’s best to exit with class.

But perhaps the real loser of the evening was conservative agitator Mike Cernovich, owned by his own call to screengrab a prediction.

incredibly happy to, my man pic.twitter.com/m3sckcRaCV

You’ll be seeing that one a lot today.