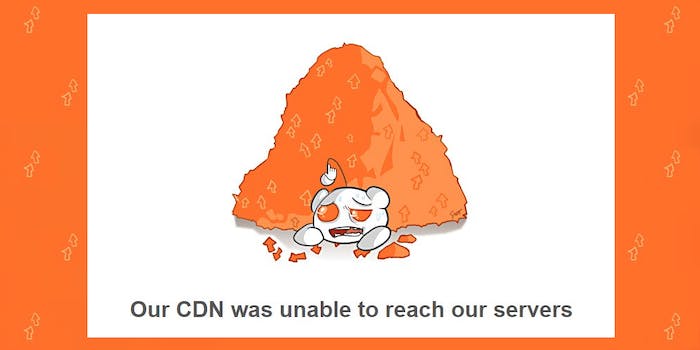 One of the world's most popular websites went dark last night.

“Sorry, for some reason Reddit can’t be reached.” It’s a message all redditors dread to see, but over the past 12 or so hours, many have seen versions of the text on the site’s homepage during a Reddit outage that started Tuesday evening

What am I going to do with my life ? #reddit #redditdown pic.twitter.com/VYx0IaaxPZ

Around 6pm CT Monday evening, Reddit went down and the company began investigating what was going on. According to Twitter, Reddit identified and fixed a problem later that evening, but many users, both on web and mobile, were still experiencing a Reddit outage.

Resolved: This incident has been resolved. https://t.co/lXnON4vxxX

Earlier this morning, a number of users still couldn’t access the site. While Reddit believed the issue to be fixed, users were seeing “Our CDN was unable to reach our server” errors and were unable to reach the site’s homepage or login page. This error is an issue on Reddit’s end and has nothing to do with a user’s machine or internet connection.

Reddit is down this morning. I am getting an incredible amount of things accomplished.