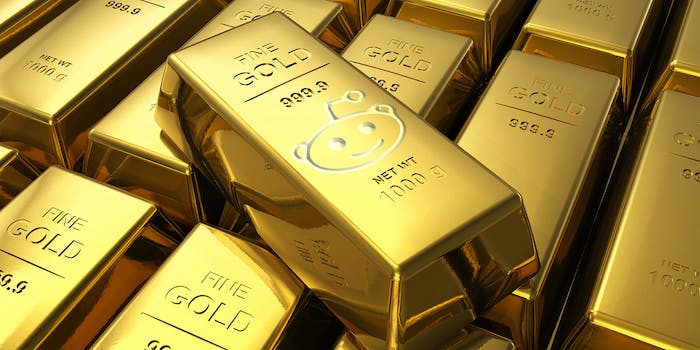 What is Reddit Gold—and why do people give it away?

Premium membership to Reddit brings with it a few interesting features that make the site better.

Reddit is a mysterious world full of adorable puppy photos and oddly intense conversation, an encapsulation of the internet if there ever was one. Picking up the nuances of the site is easy if you spend enough time on it, but there’s one question that follows new users: What is Reddit Gold?

You’ll see it mentioned almost instantly if you visit a popular thread. A user makes a comment people like, it gets a lot of upvotes, and then suddenly they’ve edited their original comment to say “oh nice, my first gold” or “thanks for the gold.” Is gold simply a gift? Do you get real gold for doing well on Reddit? To quote Jerry Seinfeld, “What’s the deal with gold?”

At its root, Reddit Gold is a premium membership to Reddit. Gold used to cost $3.99 a month or $29.99 a year, and if you originally signed up for that subscription, don’t worry—you’re still a “legacy subscriber.” For everyone else, however, Reddit premium is now $5.99 a month. With your premium account, you can give gold to other Reddit members as a reward for good posting or just because you like them. You could probably give it to an enemy as well if you were looking to confuse them.

The giving of gold is a long-running tradition in the Reddit community as a way of saying “good job” when someone provides a particularly insightful comment or funny post. Reddit Gold is a great equalizer, given in threads regardless of whether the subject matter is horrific, touching, or hysterical. The only thing that matters when being given Gold is the quality of your posting.

Beyond supporting the site, Reddit Gold unlocks a host of new features for users, although some of these same features can be activated for free by using the unofficial Reddit Enhancement Suite. Of course, then you wouldn’t be supporting Reddit.

There are several the changes being a Reddit Gold user makes to the site experience. Some are minor, some are major, but all of them are worth throwing a few dollars at the site, which allows you to argue about the existence of God, dive into a conspiracy theories, check out NSFW Reddit, or go down any other rabbit hole you can imagine.

Let’s say you were blown away by a redditor’s response to one of your submissions, or maybe they created an original work that caught your attention. If you want to give them Reddit Gold, it’s easy to do. First, click on the username. That’ll bring up a menu that looks like this:

From there, you’ll see the option to “GIVE GOLD.” Clicking that link will take you to the following page, which outlines your different options for gifting Reddit Gold. All you have to from there is a complete the checkout process.

You have a couple of options when you’re buying or giving Reddit Gold to someone else. You’ll save some money by committing to a full year, but after that, the cost levels out. You also have the option of including a message and making it anonymous.

You can also buy 12 “creddits” (get it?), which allows you to give one month of Reddit Gold at your discretion 12 times.

This one is self-explanatory, but it’s a nice break for users on a site where ad blockers don’t cover everything.

Reddit themes don’t bring any significant changes to Reddit’s user interface, but they’re a pleasant aesthetic change of pace from the normal grays of the site. You can see the Mindashq theme below.

Reddit’s mascot Snoo wears many hats. Depending on which subreddit you’re visiting, you’ll see many variations of Snoo all over the site, but that doesn’t mean you can’t make your own. Gold members get the ability to create and share their own Snoo. Name him whatever you want. We’ll always know its Snoo.

Here’s one killer feature for Reddit power users. Don’t you hate when you return to a long thread, only to have to scroll past hundreds, maybe thousands, of comments to find the new stuff? This feature will highlight new comments that have been made since you last few visited.

Do you use Reddit at home and work? Get Reddit Gold and Reddit will remember what links you’ve looked at across the computers you use the site on. This feature regrettably does not include links viewed on the mobile app at the moment.

Gold membership entitles you to create a special subreddit, hidden from the prying eyes of everyone but other Gold members.

Normally Reddit only loads 500 comments before you need to load more. Gold members get three times that much, with 1,500 comments loaded whenever you open thread.

Here’s an area where Gold membership shines. Reddit allows you to save your favorite comments, but its standard site doesn’t allow you to sort those favorites. Gold members can view their saved comments by the individual subreddit they originate from, helping you organize favorite arguments from r/politics or whatever struck your fancy in r/gonewild.

9. Keep tabs on your friends

Gold members can add little notes to their friends on the site, allowing you to remember their jobs, secrets, or personality quirks. These records are private and not shown to your friends, so go ahead and make your own Reddit burn book if you want.

Reddit Gold members get to beta test new features before anyone else does. If you’ve always wanted to be on the cutting edge of the Reddit user experience, Gold is the way to go.

Remember, it’s entirely possible to have a wonderful time on Reddit without giving, buying, or receiving Gold. It’s just a little better of a user experience. The main benefit is knowing you’re helping keep the lights on at the site that brings you so much joy. Isn’t that worth $3.99 a month? We’ll leave that up to you.

Want to know more about Reddit? Here are some fascinating facts about the site’s history, celebrity Reddit users to keep an eye out for, the best of Reddit’s Shower Thoughts, and the origins of Reddit’s most popular game, the 50/50 challenge.