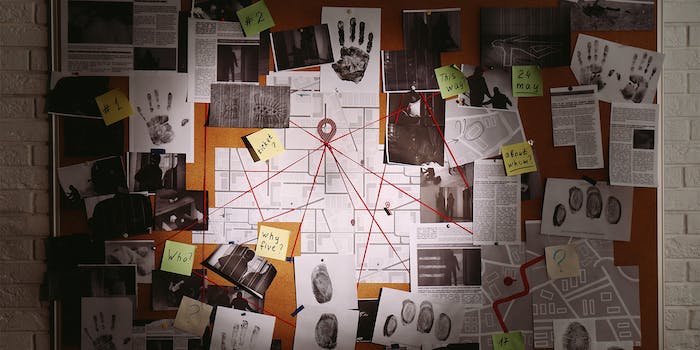 And why you should ignore early reporting.

While the QAnon movement continues to grapple with the fallout of all its dreams for a bloody end to the deep state being dashed, some things will never change about this ever-hopeful conspiracy cult. Like the certainty that a secret war is playing out in public between forces of light and darkness, using staged shootings to sway and distract the public.

Until, that is, it needs the shootings to be real.

And just as certain is the media’s growing need to feel like every utterance of QAnon promoters and faithful must be cataloged and turned into a story—leading a deluge of pieces about upcoming dates Q believers have put their faith in, bizarre conspiracy theories a few of them have latched on to, and claims of false flags, leading to an ever-growing feedback loop between the two entities.

These two strands have merged in the coverage of the shooting in Boulder, Colorado, which left 10 people dead this week.

Immediately after the shooting—as well as the one a week earlier in Atlanta—QAnon believers took to their social media channels to claim they were false flags, orchestrated by the deep state in order to advance an evil political agenda. Like previous conspiracy theories that Q believers latched onto, these claims racked up hundreds of thousands of views based on nothing other than confirmation bias and wishful thinking. And just like before, mainstream outlets wrote quick pieces acting aghast that “QAnon believers already think” the shootings were fake, parroting back the conspiratorial claims that Q promoters were making on Telegram, Gab, and other sites.

What’s more instructive is what happened after that initial claim.

QAnon is a massive conspiracy theory about a “secret war” that doesn’t actually exist but has grown to envelop conspiracists of every stripe. And false flag conspiracy theories alleging that violent incidents are fake or staged have been part of the fringe mindset for decades. The idea of every major incident spawning a legion of “truthers” may have been shocking in the early days of social media, but now, “false flag” conspiracy theories accompany almost every unexpected incident of violence and reporters know to start looking for them right away as low-hanging fruit to cover.

In reporting on the conspiracy theories pushed by leading QAnon promoters and their fans, it’s not enough to simply relay that “these people said these things.”

To do that only platforms their delusions without addressing them. It’s vital to add context, history, and intent—the reasons why Q promoters make these claims, what they hope to achieve, and whether these claims fit a pattern. Conspiracy theories are a constant drag on our ability to process mass shootings, and they need to be understood, not simply acknowledged as existing.

The response to the Atlanta and Boulder shootings follows the same pattern that absorbs virtually every incident of terrorism or extremism in America. Claim it wasn’t real by calling the victims actors, muddy the waters by including false assertions about motive or multiple shooters and absorb them into the greater narrative of a war between good and evil, with “evil” perpetuating the fakery. Only the “good” believers are here to expose it.

The chan boards where Q made every single one of their drops are so full of claims about false flag shootings that listing them all would be impossible. Anons have claimed, usually with “evidence” of memes and debunked early reporting, that the shootings in Parkland, Florida; the Pulse Nightclub in Orlando; the Las Vegas Strip; Christchurch, New Zealand; the Tree of Life Synagogue in Pittsburgh; and a hundred other places were all staged by the deep state. These theories became popular when a slew of conspiracy theories sprouted up in December 2012 around the Sandy Hook Elementary School shooting, and they’ve continued at a frantic pace ever since.

As one anon put it on 8chan in 2018, “Everytime [sic] there’s a shooting I can’t take it seriously until I digg [sic] to see if it’s real. I’m so sick of false flag shootings with over the top crisis actors who can’t act for shit.”

Nobody died in any of these instances, they claim. All were faked as part of an agenda to strip away our guns and our freedom in favor of progressive totalitarianism and slavery.

“False news reports are allowed and legal but murder is illegal. False flag shootings are media events not actual crimes. Nobody dies in Sandy Hook, the Boston Bombing, the Paris shooting, the Ariana Grande concert,” wrote one anon in 2018. Apparently, the deep state isn’t evil enough to actually kill anyone—merely to strip away our cherished freedoms by pretending to do so.

But what’s the point? This is a question that most of the instant takes on false flag claims miss. If every single shooting or incident or terror is fake, and an easily discovered fake at that, why would the deep state keep doing it? And why do Q promoters and believers insist in this particular narrative—of fakes that are readily “discovered” and yet constantly deployed? Doesn’t anyone change tactics or learn from their mistakes? And if these attacks were staged in order to advance a totalitarian gun control agenda, why has no major gun control legislation actually been passed in the wake of any of these mass shootings?

Because it’s not really about that. Ultimately, it’s feeling like you know what’s “really” going on and smugly declaring it to the community you’ve built around you. QAnon and other conspiracy theories like it exist in a world where nothing is real, everything is staged, the secret war is all around us, and only those who can discern the real “reality” from the fake one created by the media and the government know the truth. That concept of secret knowledge is critical to understanding the appeal of QAnon. It’s not enough just to claim that the incident was fake. It’s that you know the incident was fake because you’re listening to the right people and believing the right things. Some of them may genuinely think the shooting was fake, but the appeal of these claims goes beyond that—it’s about being in a special club that knows things other people don’t. That’s part of the general appeal of conspiracy theories, and why they’re so hard to pull people out of. Who doesn’t want to think they know the real truth?

This is the appeal of the kind of “QAnon believers are saying” coverage that comes out in the wake of a mass shooting. We feel like it sheds light on what the worst parts of the internet are saying, and lets us gawk at their inanity. But it doesn’t tell us anything other than what they’re saying and doesn’t contextualize it as part of a bigger struggle to fight conspiracy theories.

And it helps reinforce believers’ faith in themselves. Of course, the mainstream media would report their claims as absurd, as they are in on pushing the mainstream government narrative, wanting to smear anyone who tries to think out of the box.

But even QAnon faithful need to be swift to adapt. The false flag narrative ended in Boulder when the man arrested as the alleged shooter was revealed to be a 21-year-old man born in Syria who had come to the United States as a child. Figures in the right-wing conspiracy world that QAnon lives in quickly pivoted from claiming the shooting was fake to claiming the shooting was carried out by an “Islamic Trump-hating terrorist,” to use the words of Joseph Flynn, the brother of QAnon hero Michael Flynn.

Many other Q promoters wondered on Telegram and Gab if the media would “stop reporting” on the alleged shooter because of the possibility of him being Muslim (it hasn’t been established if he’s an observant Muslim and the media hasn’t stopped reporting on it) and speculated that he was a Syrian refugee “imported” during the Obama years to carry out attacks. While Q is a big enough tent that some will continue to believe the shooting was fake, for most major promoters, the shooting immediately became real once the identity of the shooter was revealed and some link to Islam could be inferred.

Again, this shouldn’t surprise anyone. While most of us mourn the victims of mass shootings and demand action to make sure guns are more difficult for unstable people to get, conspiracy theorists use them to advance the stories they’ve been telling. Sometimes, that story requires a mass shooting to be fake. Other times, they require the shooting to be real. It entirely depends on what will be most helpful for their own brand. For QAnon promoters, these shootings need to fit into the larger story of a war between good and evil that only a select few know about. Whether the shooting itself is fake or real, the product of deep state plotting or mind control gone wrong, or whether the victims exist is all beside the point.

The point is to question what the outgroup (in this case, the media) are telling you and accept what the ingroup (Q promoters) are telling you. And when the media publicly admonishes you, it only serves to reify that belief.

These are the real battles being fought on social media—not a secret war between good and evil, but a public one between the truth and conspiracy theories. Merely reporting on that battle without providing the context behind it only tells a fraction of the story.