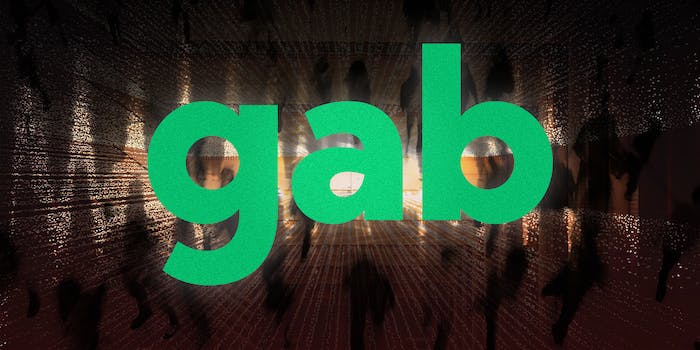 Gab was destined to be horrible.

Within the first few weeks of Gab’s launch into private beta in 2016, posts about how “women are ruined” because “today’s women would rather be feminist than feminine” were among the most-upvoted on the site. Still yet to launch, the self-described free-speech social media platform had already set the stage to become what it is known for today—the preferred platform for the far-right.

Despite a recent hack which saw over 70GB of Gab data handed over to journalists and researchers, Gab has a long history of people accessing and archiving its data. Though this may be the most well-reported dump of Gab data, internet researchers have been archiving data from the far-right’s preferred social media platform as early as 2017.

These early scrapes of the website were obtained legitimately, gathering publicly accessible data through Gab’s API. The files, which contain millions of data points, document a large volume of public statuses, users, and now-deleted posts between 2016 and 2018.

They also reveal who the site’s most popular posters were at the onset, some of the biggest names in far-right media.

One such dataset, provided to the Daily Dot, contains 50GB of data scraped from Gab across its first two years online. It includes status updates and a list of users, specifying whether they were verified or had donated to Gab, and also has data for users who have since deleted their accounts.

One feature that stands out in the compiled datasets is a score system, where users could upvote posts from others, seemingly giving them more visibility on the platform. Searching for the most upvoted content demonstrates a clear preference for more extreme and controversial content.

The highest scoring content in January 2018, for example, includes statuses asserting “liberals are pedophiles”, declaring “FUCK ISLAM […] britain first ….WE’RE FIGHTING BACK !!!!” and positing “all of Africa put together has an economy smaller than Japan, I wonder what could possibly explain that?”

“It’s not necessarily that Gab rewarded the best content, or punished the worst, but does it reward what the group thinks,” Nathalie Van Raemdonck, a doctoral researcher at the Vrije Universiteit Brussels, who researches platform architecture, told the Daily Dot. “Because the people on the platform were already terrible, they needed engaging conversations to stimulate each other, so it became a circlejerk to the bottom.”

When Gab began, it marketed itself as a place for people who had been banned from other platforms, creating a very specific audience from the outset. “The fact that they portrayed themselves as a free-speech platform attracts a certain crowd,” said Van Raemdonck.

A platform’s users and its infrastructure are key components of how the tone is set on a platform, says Van Raemdonck, “if your original group is quite terrible, they become the influencers of that network because when you’re completely new to the network and don’t have any friends who are on there you start following these people, so they set the tone for the whole conversation.”

Among the first people on the platform was far-right political commentator Milo Yiannopoulos, the MAGA podcast, and a slew of Breitbart journalists. Of the first 1,000 users who signed up to Gab, around one in 10 explicitly mentioned being Trump supporters in their bio. Roughly a quarter of the other first 1,000 members did not change their bios from the ones pre-generated by Gab upon signup—all of which are quotes about censorship.

Top scoring profiles are a who’s who of well-known political commentators, trolls, and provocateurs of the time. As of data collected in mid-2018, some of the highest-scoring profiles include, but aren’t limited to: InfoWars editor Paul Joseph Watson, who had a total score of 90,112; political YouTuber and conspiracy theory propagator Brittany Pettibone, who had a score of 240,487, the second-largest score under CEO Andrew Torba; and self-described Christian nationalist Theodore Beale, also known as Vox Day, who amassed a score of 111,372. All of these accounts joined Gab within the last three months of 2016, while Gab was still in private beta.

Also included within the top 25 accounts in terms of score is a “party-approved” acount posting on behalf of Dutch far-right politician and anti-Islam campaigner Geert Wilders, with a total score of 55,751.

The self-proclaimed founder of r/Pizzagate on Reddit, which touted the conspiracy that soon because QAnon, had score of over 24,000

Accounts with the lowest scores were mostly trolls on the political left.

The most downvoted account in Gab’s early history? RoBO2008, whose bio stated “Proud liberal here to shoot down wild and crazy alt right wing conspiracies and fake news,” which had a score of -16,140

Despite the upvote system providing an easy way to quickly moderate some of the platform’s most toxic content, one of Gab’s cornerstone principles was that any and all moderation is a violation of free-speech.

The little moderation the platform did have prohibited illegal pornography, posts that promote terrorist acts, threats to other users, and doxing other users’ personal information. Despite this, at least one account regularly offered cash rewards on Gab for identifying “social justice warriors” in 2017.

Near the end of the first month in private beta, Gab CEO Andrew Torba posted: “Here are our guidelines. They are very simple and common sense. Please respect them. Otherwise, speak freely.” Within 10 minutes, users resumed posting anti-Semitic and Islamophobic posts. While Gab’s guidelines required users to “try and be nice to everyone,” the platform does not moderate racist, sexist, homophobic, anti-Semitic, or Islamophobic content, which presumably falls into the “speak freely” category.

Before that first month was out, users had already engaged in a race to the bottom, trying to one-up each other under the hashtag “SaySomethingOffensive.”

Even though the content is hostile and offensive to those on the outside, Torba said in an early interview “while we certainly expect conservatives to be among some of the first users of Gab, we aren’t out to build an echo chamber.”

A 2018 study assessed just this, titled “What is Gab: A Bastion of Free Speech or an Alt-Right Echo Chamber?” It examined 22 million posts on the platform and concluded that hate-speech on the platform was 2.4% higher than on Twitter, coming second only to 4chan’s Politically Incorrect board in terms of the number of posts containing hate words. The study further noted that “Gab reacts strongly to events related to white nationalism and Donald Trump.”

When asked about how Gab’s design shaped the platform and whether highly upvoted and controversial content was given more visibility or reviewed in any way, Gab CEO Andrew Torba responded: “imagine thinking that I’m going to waste my time replying to any of this nonsense about five year old data. No one cares. Get lost, blogger. Right in the spam folder you go. Jesus is King.”

Jordan Wildon is a digital culture reporter based in Germany. He specializes in online investigations, often covering disinformation, conspiracy theorists, and the global far-right.