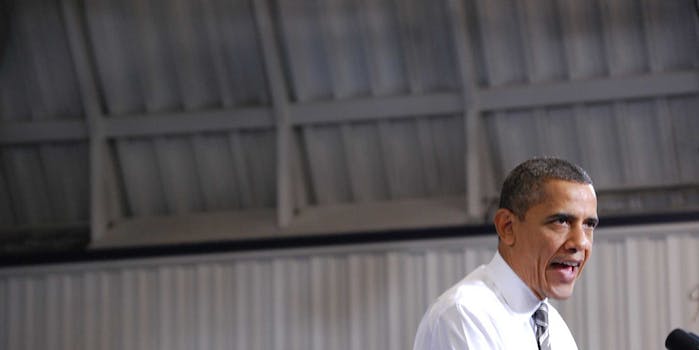 For some reason it's not just all of Ted Nugent's 'Cat Scratch Fever.' Weird, right?

On Friday President Barack Obama released a pair of playlists on Spotify. It’s a weird thing for the president to do, especially when he doesn’t have to campaign for anything ever again. Releasing supposedly hand-curated Spotify mixes is something done by candidates whose handlers insist they need to work harder to appear human.

One playlist is labeled “night.” It features songs by Al Green and D’Angelo. It’s clearly what the the president throws on when he and FLOTUS want some private time after tucking Joe Biden in for the night.

The “day” playlist, on the other hand, is a little more interesting:

What do Obama’s daytime summer jams mean? Let’s break it down song by song:

What actually went on during the Iran negotiations is confidential, but the president does like to drop clues. The title of this song is a general outline of his strategy.

That sick burn was brought to you by every Republican running for president, except maybe Rand Paul. Well, actually, even Rand Paul.

Everyone knows that George “William Jefferson” Clinton was America’s funkiest president. The hard-driving, clavinet-led groove on this 1974 standard puts Obama in the running for a respectable second place.

Reflection Eternal is a hip-hop duo that pairs rapper Talib Kweli and producer Hi-Tek. Kweli has been repping Obama since his first presidential campaign, saying, “speak to the people like Barack Obama” on the 2007 track “Say Something.”

Obama featuring a track from another Kweli project on this playlist is clearly just another example of the Chicago-style tit-for-tat politics that have become a sad hallmark of the Obama White House.

Well, John the Baptist after torturing a thief
Looks up at his hero the commander in chief
Saying, “Tell me great hero, but please make it brief
Is there a hole for me to get sick in?”
The commander in chief answers him while chasing a fly
Saying, “Death to all those who would whimper and cry.”
And dropping a bar bell he points to the sky
Saying, “The sun’s not yellow, it’s chicken.”

1. One time Obama killed a fly during an interview, displaying the sort of frightening intensity required to spend two terms as the leader of the free world.

2. “The sun’s not yellow, it’s chicken” is what Obama says whenever he invites the Choom Gang over and sticks a towel under the crack in the door to the Lincoln Bedroom.

Speaking of the Choom Gang, Obama put a sweet blacklight poster of Bob Marley smoking a joint up in the Lincoln Bedroom. Michelle always gives it the side eye, but whatever. When the commander in chief turns 56, he’s totally moving out and getting his own place where he can put rad posters in any room he wants.

Joe Biden loves Coldplay. This isn’t a joke. Chris Martin sang a Coldplay song at the funeral of Biden’s son earlier this year. It was really moving. Not everything has to be a joke.

This one, on the other hand, does have to be a joke.

The president of the United States, a 54-year old man whose job requires constant attention every waking second, listens to Spanish feminist hip-hop. Yes, this officially makes him hipper than you.

Did Obama’s immediate predecessor in the White House wave at Stevie Wonder one time? No, that did not happen. That story is false. Sorry to burst your bubble about George W. Bush being such a complete dolt that he once waved to a blind person. You are allowed to continue telling it as if it were true because this is America and the freedom to cite dubiously sourced evidence as proven fact to advance your preexisting ideological agenda is the foundation on which this great country was built.

10) Sly and the Family Stone – “Hot Fun in the Summertime”

Michelle Obama would like the youth of America to go outside this summer. Just like once or twice. They can even just sit under a tree and play Minecraft on an iPad as long as they walked to the backyard under their own power. Just do something, anything. Please. If kids don’t start getting at least a tiny bit of exercise this whole Obamacare thing isn’t going to work.

A song for John Boehner.

12) Brandi Carlile – “Wherever Is Your Heart”

What constitutes a “good day” for Obama at this point? Playing golf with NBA stars Ray Allen, Alonzo Mourning, and Steph Curry while vacationing in Martha’s Vineyard.

This 2008 collaboration between Legend and André 3000 is fine or whatever, but what really should go right here is “Sausage” by Lil Mama. Obama didn’t put “Sausage” on his playlist even though it’s unquestionably the song of the summer. Inexcusable. As Donald Trump says, “Make America Great Again” and listen to this song a whole bunch non-stop.

President Obama was eight years old when this song was released. Let that one sink in for a second, baby boomers.

Aretha Franklin sang at Obama’s 2009 inauguration. The last time Obama heard Franklin sing, it made him cry. One time he gave a speech honoring her and accidentally spelled it “R-S-P-E-C-T.” Obama and Franklin go way back.

Look at that fucking hipster, listening to Austin, Texas-based alt-country.

In the year 2000, if someone were to tell you that 15 years from now a president of the United States would include a song by the main dude from ‘N Sync on a Spotify playlist, you’d say, “Wow, that’s crazy! What an unexpected transition! Also, what’s Spotify? More importantly, how did you know that? Are you from the future? If so, why are you wasting time telling me inconsequential trivia and not stopping 9/11, a tragic event of which I have no knowledge?”

Honestly Obama thought this was that Taylor Swift song with a similar name and didn’t actually listen to it before adding to the playlist.

This addition of this 2003 hit from Colombian salsa band Sonora Carruseles is part of the Democratic party’s effort to woo Hispanic voters for Hillary in 2016. Its placement at very end of the playlist indicates there wasn’t a tremendous amount of effort involved.

Photo via Daniel Borman/Flickr (CC BY 2.0)