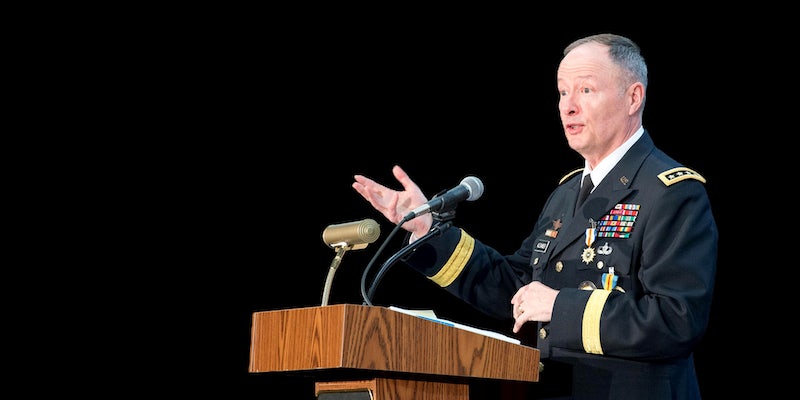 If you’re smart enough enough to make it into a Harvard Law program and have $7,200 to spare, the recently-retired head of the National Security Agency is happy to give you some tips on cybersecurity.

Gen. Keith Alexander, who headed the NSA from 2005, and U.S. Cyber Command from 2010, until his full retirement in March of this year, is one of several guest faculty instructors at a weeklong Harvard program called “Cybersecurity: The Intersection of Policy and Technology.”

While Alexander had a long and varied career, his legacy is forever punctuated by his final months, in which he dealt with former NSA systems analyst Edward Snowden‘s decision to leak documents detailing scores of U.S. government spy programs. Though the programs sparked international public outrage, and promises of reform from the White House, Alexander has maintained he doesn’t understand why people dislike the NSA.

The class Alexander is set to teach is not, of course, a normal class. It’s part of Harvard’s Executive Education program, a series of short, elite one-off classes with top-notch faculty. While $7,200 might sound like a lot, keep in mind that price also includes housing for participants and covers “most meals.”

The program, Harvard says, “is the first of its kind to focus on the intersection of policy and technology to address the critical threats of a cyber world.” It also aims to give attendees “a conceptual framework for the design of both cybersecurity policy and technology,” according to the university.

The teaching position is also evidence of Alexander’s diverse, lucrative new civilian life. A few weeks prior, reports surfaced that he planns to create a consulting firm to advise banks how to protect themselves from cyberattacks. He also went on the debut episode of John Oliver‘s HBO show, Last Week Tonight, where Oliver convinced him to say “Mr. Tiggles.”

Photo by Chairman of the Joint Chiefs of Staff/Flickr (CC BY 2.0) | Remix by Fernando Alfonso III