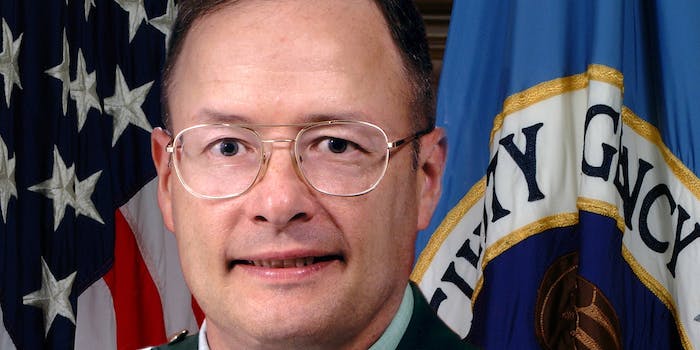 Keith Alexander doesn't understand why no one really likes him.

As National Security Agency director Keith Alexander retires, he’s not sure why so many people dislike him and his work.

Alexander’s retirement ceremony was Friday, but the NSA said his relief from active duty came Monday. A relatively intimate profile on him in the L.A. Times—derided by some for not addressing his critics—describes the four-star general as “disturbed, and somewhat baffled, by the intensity of the public reaction” to his agency.

Jokes about the NSA spying on civilians are old, and certainly predate the world’s introduction to former agency contractor Edward Snowden, who in 2013 leaked a still-flowing cache of NSA documents to a handful of journalists. But it was only with Snowden’s disclosures that the world saw the nitty-gritty of how the NSA works. And reaction seems largely negative: Even among people who don’t approve Snowden (though plenty do), a majority of Americans don’t approve of the NSA, Snowden’s leaks prompted international protests, and a number of American allies expressed outrage.

But that seemed lost on Alexander. “I think our nation has drifted into the wrong place,” he told the Times. “We need to recognize that those who are working to protect our nation are not the bad people.”

It’s important to recognize that while some of the NSA programs illuminated by Snowden are of dubious legality, they often aren’t explicitly illegal. The agency’s practice of tracking Americans’ phone data, which the White House recently promised to end, allowed President Obama to say with a straight face in 2013 that “if you are a U.S. person, the NSA cannot listen to your telephone calls.”

Of course, that comes with a number of caveats. Practically no one knew that the phone metadata collection program existed; it was made legal through a classified ruling by the Foreign Intelligence Surveillance Court. A number of studies argue it’s wrong to dismiss metadata as less invasive than the contents of one’s phone calls. And note Obama’s “U.S. person” qualifier: American privacy protections are zero obligation to protect anyone else.

And he’s certainly not alone. John “Chris” Inglis, Alexander’s former deputy who resigned in January, took it a step farther. “For the first week or so [after Snowden’s leaks], we all had this idea that we had nothing to be ashamed of, and that everyone who looked at this in context would quickly agree with us,” he told the Times.

Alexander also contrasted the NSA’s activities under his leadership with two previous investigations into intelligence misuse, and clearly saw them as distinct from his NSA. “What the Church and Pike committees found,” he said, was “that people were doing things that were wrong. That’s not happening here.”

On March 17, 16 remaining counsel and staffers from the original Church Committee called on Congress to create a new, similar agency to investigate the NSA.

Alexander will be succeeded by Navy Vice Admiral Michael Rogers.