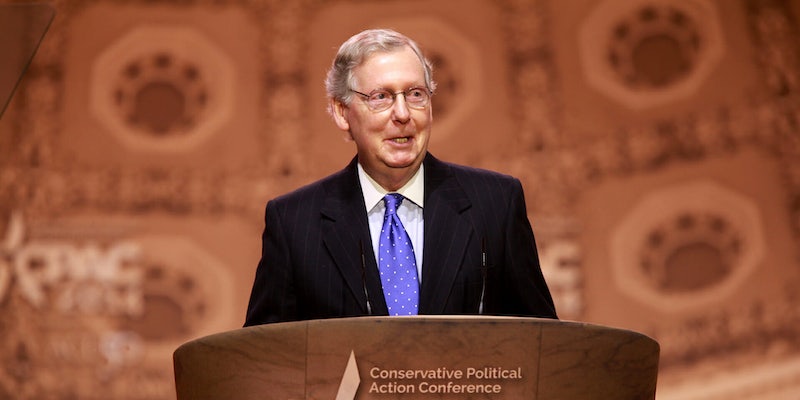 The Save the Internet Act was one of several bills mentioned by Senate Democrats.

Senate Democrats released a video on Tuesday highlighting a number of pieces of legislation—including the Save the Internet Act net neutrality bill—that Senate Majority Leader Mitch McConnell (R-Ky.) has refused to take to the floor for votes.

The Senate, as the video says, has become “Mitch McConnell’s legislative graveyard.”

The Save the Internet Act, a bill that would undo the Federal Communications Commission’s (FCC) repeal of the 2015 Open Internet Order, passed in the House of Representatives 232 to 190 last month after weeks of debate among lawmakers.

One the same day as the House vote, McConnell called the bill “dead on arrival” in the Senate.

If it were to come to a floor vote, the bill would face an uphill battle. Last year, when Democrats in Congress tried to use the Congressional Review Act (CRA) to overturn the FCC’s repeal, several Republicans broke ranks with the rest of their party and voted in favor of it.

After the 2018 midterms, Republicans gained seats in the Senate, making any passage of the Save the Internet Act require more bipartisan support. If it were to pass through the Senate, President Donald Trump would need to sign it into law. The White House has signaled it would veto the legislation.

The Save the Internet Act was highlighted by the Senate Democrats among a number of other bills including the Violence Against Woman Act, the For the People Act, and a law that would have expanded background checks for gun sales, among others.

The “graveyard” video—which follows House Speaker Nancy Pelosi calling on McConnell to take up votes on a number of bills two weeks ago—was mocked by many conservatives on Tuesday, who enjoy McConnell’s dedication to obstruction.