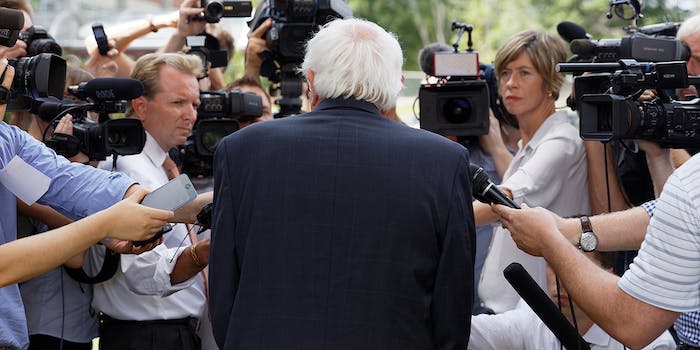 “This is a massive vote in favor of Bernie Sanders,” MoveOn.org Political Action Executive Director Ilya Sheyman said in a statement, “showing that grassroots progressives across the country are excited and inspired by his message and track record of standing up to big money and corporate interests to reclaim our democracy for the American people.”

MoveOn, which now boasts a membership in the millions, was created in 1998 as a way for people to voice opposition to the impeachment of President Bill Clinton. The group was established by Joan Blades and Wes Boyd, co-founders of Berkeley Systems—a “dot com”-era software company famous for its After Dark animated screensaver program that introduced the world to the concept of flying toasters.

The group was originally called Censure and Move On, after the founders’ favored proposal to have Congress punish Clinton with a censure rather than mire Washington in the “partisan warfare” that a full impeachment would entail. The following year, the group formed a political action committee and has spent the last 17 years advocating for progressive politics, growing into one of the most important groups in the country when it comes to mobilizing the Democratic Party’s grassroots activists.

Despite the intent of its founding, this vote is the second time that the group’s membership has snubbed Hillary Clinton in favor a challenger from the former first lady’s left. In 2008, the group endorsed then-Illinois Sen. Barack Obama over Clinton by a slightly smaller margin—70 percent for Obama to Clinton’s 30. “Our members’ endorsement of Senator Obama is a clear call for a new America at this critical moment in history,” MoveOn Executive Director Eli Pariser told the New York Times as the time.

The largest difference between MoveOn’s 2008 endorsement and the one this cycle is its timing. In the 2008 contest, MoveOn announced the results of its membership’s vote on Feb. 1, a few days before the “super Tuesday” primary when 23 states held votes on the same day. By that point in the election cycle, five state parties (Iowa, New Hampshire, Michigan, Nevada, and South Carolina) had already held nomination votes. This year, the endorsement comes before official start of the primary process.

Spokesperson Brian Stewart explained that the shift in timing was largely due to MoveOn’s leadership recognizing that its members had largely coalesced around a single candidate earlier in this election cycle than they had in 2008. “We couldn’t 100 percent predict how it would break down… but through surveys and conversations with our members we had a sense that they were more unified [around Sanders].”

This shift in timing is important because MoveOn has 43,000 active members in Iowa and 30,000 in New Hampshire—two early voting states where Clinton and Sanders are neck and neck.

Stewart noted that, while there are plans to leverage the group’s resources to support Sanders by everything from phone banking to fundraising, the primary focus in those states immediately after the endorsement is turn the group’s members out to the polls.

In 2004, the group did not make any endorsement in the Democratic Primary

Photo via Michael Vadon/Flickr (CC BY 2.0)