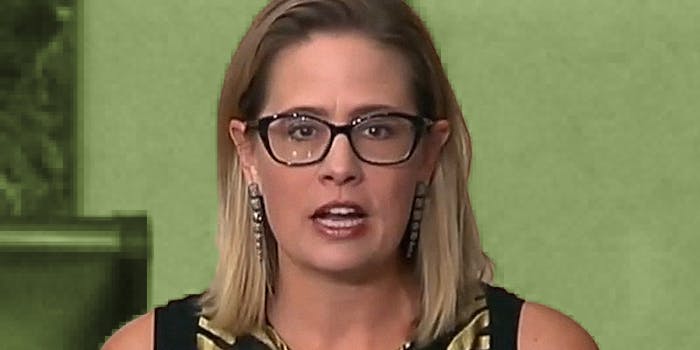 Gigi Sohn's nomination could give Sinema another opportunity to bring Biden's agenda to a halt.

President Joe Biden’s recent nominees to fill out the Federal Communications Commission (FCC) will soon face confirmation hearings in the Senate, and their fates could be potentially be impacted by a senator with a history of both mucking up Congress and opposing net neutrality: Sen. Kyrsten Sinema (D-Ariz.).

The hearing, which officials tell the Daily Dot has a goal date of the week of Nov. 15, will be before the Senate Commerce Committee. Sinema is one 14 Democrats on the committee.

Biden last week announced the nominations of Jessica Rosenworcel, for another term and also to become the full-time chair, and Gigi Sohn to be the fifth commissioner at the agency. The nominations were lauded by public interest groups and observers, and since then, there’s been a sense of urgency to get the confirmation hearings scheduled. Rosenworcel’s term technically ended last year, but rules allow her to stay at her post until January. If the Senate doesn’t confirm Rosenworcel and Sohn before then, the FCC could fall into 2-1 a Republican majority.

But there’s the possibility the duo couldn’t even get out of committee. Sinema’s record on net neutrality issues, which is expected to be one of the top priorities of a Democratic-led FCC, is opposed to that of Rosenworcel and Sohn.

Both of Biden’s FCC picks have been vocal about their support of classifying internet service providers (ISPs) under Title II of the Communications Act. The 2015 Open Internet Order, which the FCC enacted, enshrined net neutrality rules like prohibiting blocking, throttling, and paid prioritization of internet traffic and also classified ISPs under Title II.

Generally speaking, Title II is a broader regulatory umbrella and would treat ISPs similar to common carriers. The Open Internet Order also gave the FCC authority to oversee the broadband industry, which was repealed by the Republican-led FCC in 2017.

Experts have said, if confirmed, Rosenworcel and Sohn are expected to pursue Title II classification at the FCC once again with sitting Commissioner Geoffrey Starks.

In contrast, Sinema has been vocally against net neutrality efforts that include Title II, mirroring the beliefs of most Republicans on the issue.

Following the FCC’s repeal of net neutrality, Congress attempted to pass a law that would bring the rules back and codify the 2015 Open Internet Order. The Save the Internet Act was introduced in both chambers of Congress and ultimately passed in the House of Representatives in April 2019.

However, when the Senate version was introduced, nearly every Democrat and Independent who caucused with Democrats co-sponsored the bill. Sinema was the only Democrat who didn’t join her colleagues.

Despite passing in the House, the Save the Internet Act languished in the then-Republican controlled Senate.

Instead of co-sponsoring the bill, Sinema announced that she had formed a working group with Sen. Roger Wicker (R-Miss.) to try and work “across party lines to find a bipartisan solution.” Wicker is the ranking member on the Senate committee that will hold the confirmation hearings for Rosenworcel and Sohn.

Net neutrality advocates at the time blasted the working group as a “charade” and it is unclear what, if anything, came from the working group. The Daily Dot has asked representatives from Wicker and Sinema’s offices about it for years. They’ve never answered questions about it.

Meanwhile, a spokesperson for Sinema told the Daily Dot in 2019 that the senator was not in favor of Title II regulations.

“The senator believes that the internet requires a modern regulatory framework which only Congress—in a bipartisan fashion—can accomplish,” a spokesperson for the senator told the Daily Dot at the time, adding that she didn’t think the Save the Internet Act “would accomplish that.”

Sinema’s office did not respond to a series of questions from the Daily Dot, including whether her views on Title II have changed over the past few years, whether or not they would factor into her votes for Rosenworcel and Sohn, and what happened with the working group with Wicker.

Despite that history, there is optimism surrounding the confirmations of Rosenworcel and Sohn.

Mark Stanley, the director of operations at Demand Progress, told the Daily Dot on Thursday that he was “confident” that Sinema and perhaps even some Republicans would vote for Sohn and Rosenworcel.

Stanley said Sinema’s record on voting for Biden administration nominees was “solid” and the realization by lawmakers that the FCC needs to be filled after nearly a year of deadlock made him hopeful the two nominees would be confirmed quickly.

“I think the importance of having a fully functional FCC that can help ensure affordable and high-speed broadband for Americans is self-evident,” Stanley said, adding: “That applies to a lot of the constituencies that Sen. Sinema obviously represents. From ordinary folks in Arizona, to small businesses, to tribal groups in that state. I think she has a solid record on voting to confirm Biden administration appointees, and I think that will be the case here.”

Stanley added: “When you look at both of these nominees, you have to look at their qualifications and their willingness and their ability to work and talk with people from all sides, including Republicans and including people in the industry. I think they both have unassailable track records and experience that makes them extremely qualified for this position. That gives me a lot of confidence in the prospects of them getting all the Democratic votes, and potentially some Republican votes.”

On the committee end, most recent FCC confirmations have been voice votes rather than having each committee member vote in a tally. However, in the most recent confirmation of Nathan Simington, who was a controversial nominee of then-President Donald Trump, the then-Republican controlled committee voted 14-12 to confirm him.

As Politico notes, Republicans have already begun expressing misgivings about Sohn’s nomination in particular, which could make Sinema’s vote—if the nominations go out of the committee and to a full Senate—critical.

However, several Senate Republicans have broke ranks with the rest of the party in the past regarding net neutrality, so it is possible they would vote in favor of Sohn and Rosenworcel. But if Republicans stay united in opposing the two nominees, it makes every Democratic vote—like those of Sinema and Sen. Joe Manchin (D-W.V.)—important.

Sinema will have the opportunity to ask questions of both Sohn and Rosenworcel during the forthcoming confirmation hearings. Her remarks could be telling about how she’ll move forward.