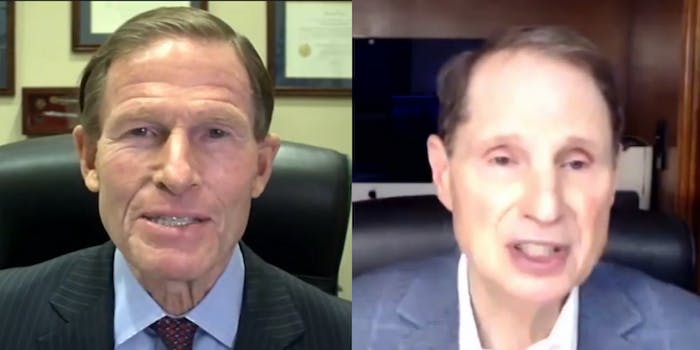 The senators and advocacy groups warned about a potentially deadlocked FCC if Simington is confirmed.

Simington is set to receive a full Senate vote—perhaps this week—after clearing through a Senate committee last week. Simington’s nomination has been fraught with controversy because of his connection to Trump’s social media executive order that targets Section 230 of the Communications Decency Act.

Section 230 is an important internet law that shields websites from being held liable for what users post. It’s been hailed as “one of the most valuable tools for protecting freedom of expression and innovation on the internet,” but despite this, the law has become a target for lawmakers on both sides of the aisle.

Tech advocates have warned that changes to the law could have far-reaching consequences online.

Simington has insisted that he had a “minor” role in crafting Trump’s order while working at the National Telecommunications and Information Administration (NTIA), however, a Politico report showed that he emailed Fox News over the summer asking to the news outlet to help “get the FCC on board more quickly and thereby ensure a freer, fairer social media landscape going into the elections this fall.”

He was also picked by Trump to be named to the FCC after revoking the re-nomination of Republican FCC Commissioner Michael O’Rielly shortly after he raised concerns about whether the FCC has the authority to carry out what Trump’s social media order asked it to do.

Aside from Simington’s Section 230 views, his appointment to the FCC could also impact how the agency functions early on in President-elect Joe Biden’s presidency.

If Simington passes through the Senate, it would leave the agency in a 2-2 deadlock after Chairman Ajit Pai leaves his post on Inauguration Day. The agency is supposed to have five commissioners—three from the president’s party and two from the opposing party.

If Republicans control the Senate after Georgia’s Senate runoff elections, they could block, or stall, Biden’s pick to fill out the agency. That block would create a 2-2 partisan deadlock, blocking any party-line votes—such as restoring net neutrality rules.

Simington is a ‘deeply dangerous’ pick for the FCC, senator says

Blumenthal, who grilled Simington at a Senate Commerce Committee hearing, called him a “deeply dangerous” pick for the FCC.

“Nathan Simington is a deeply dangerous nominee to the FCC. He’s dangerous on the issues because of his opposition to net neutrality, because he refused to answer any of my substantive questions during the hearing on E-Rate, on Lifeline, and because he would probably mean a divided and probably gridlocked FCC,” Blumenthal said, later adding: “He is the wrong person for the FCC right now, he is conflicted, unprepared, and unqualified as he demonstrated during the hearing.”

Meanwhile, Wyden echoed Blumenthal, promising to “pull out all the stops” to oppose Simington’s nomination.

Blumenthal elaborated, saying that they were “pressing our case” in the Senate and that people can tell their lawmakers that “their vote will have consequences.” The Connecticut senator had threatened to put a hold on Simington’s nomination during a hearing last month.

“It’s going to be close, I believe one way or the other, judging by what my colleagues on both sides are saying,” Blumenthal said of Simington’s vote in the Senate. “Just a couple of Republicans can make all the difference.”

The advocacy groups on the call highlighted actions a Biden-backed FCC would seek to do, like restore net neutrality rules and address the digital divide, and how that could be impacted by a deadlocked agency.

They also urged people to call lawmakers and urge them to reject Simington’s nomination.

Evan Greer, the deputy director of Fight for the Future, noted that pressure from constituents can have results, like when three Republican senators bucked their party in 2018 when they voted in favor of a Congressional Review Act effort to overturn the FCC’s net neutrality repeal.

“If they hear from enough of you out there, if you make the calls, make the emails, talk to your senators, we can do this,” Greer said. “We’ve done it before and we can do it again. But it’s only going to happen if internet users from across the political spectrum come together to fight.”